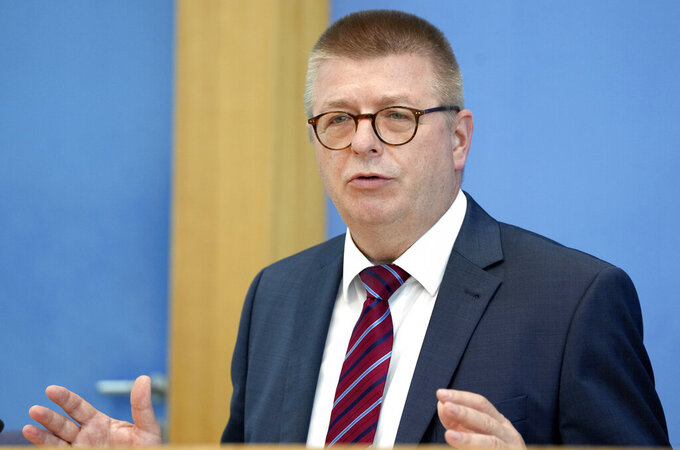 Michael Sohn, ASSOCIATED PRESS
Thomas Haldenwang, head of the German Federal Office for the Protection of the Constitution, addresses the media in Berlin, Germany, Wednesday, July 14, 2021 during a press conference on the 'security of the federal elections 2021'. (AP Photo/Michael Sohn, pool)

BERLIN (AP) — German authorities see an interest on some countries' part in influencing Germany's national election in September, but so far such activities are at a “low level,” the domestic intelligence chief said Wednesday.

Germany will elect a new parliament in a Sept. 26 vote that will determine who succeeds Chancellor Angela Merkel. She is not seeking another term after nearly 16 years in charge.

Thomas Haldenwang, the head of the BfV domestic intelligence agency, said there have been varied efforts to exert influence by other countries in previous German elections and “we definitely see the interest of certain states in exerting influence on this year's parliamentary election — there are indications of this.” He didn't identify those countries.

He told reporters in Berlin that “the intensity of these measures is still at a low level at the moment” but authorities have observed hacking attempts that could be preparations to leak real or fake material at a later point.

Haldenwang said that, since February, his agency has seen “intensive attack activities by a cyber-actor in Germany” which likely have an intelligence background, focusing on phishing attempts on the private email accounts of federal and state lawmakers and their staff. But he said that very few of those attempts were successful, and in cases where they were little damage appears to have been caused.

“It's a normal television broadcaster that treats us in an unfriendly way, but every mature citizen can deal with that,” Interior Minister Horst Seehofer said. “I'm no friend of Russia Today, so that you understand me correctly, but it's propaganda — anyone can see through that.”