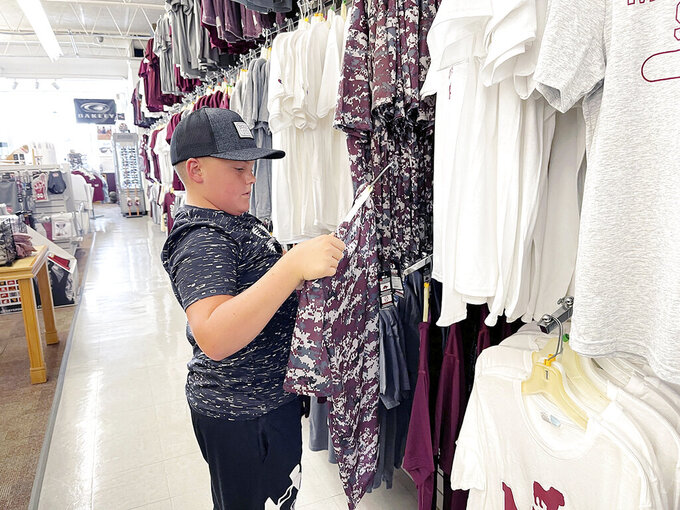 Tyler B. Jones, ASSOCIATED PRESS
Jace Hill, 12, shops for Mississippi State University apparel at The Lodge in Starkville, Miss., Wednesday, July 22, 2021. Many Starkville retailers have seen an influx of sales since the National Championship win. (Tyler B. Jones/The Commercial Dispatch via AP)

STARKVILLE, Miss. (AP) — Retailers are enjoying a boom in demand for Mississippi State University clothing and other gear since the Bulldogs won the College World Series championship.

The Commercial Dispatch reported that sales have hit a record high at Maroon & Co. in Starkville, according to store manager Alex Gomez. He said June saw a stark uptick in business and July has been even better.

“This is what we look for during the holidays, so we’re very glad to be able to have all of these sales," Gomez said.

The Lodge in Starkville has also seen an increase in demand for Mississippi State products. Owner John Hendricks said many local and out-of-town customers have visited his store, and online orders are also up.

“We’ve never won a national championship, so there is so much excitement this summer surrounding these products,” Hendricks said.

From clothing to souvenir baseballs to Christmas ornaments, The Lodge sells multiple products that display “National Champions.” The most sought-after product is the store’s replica pinstripe baseball jersey, Hendricks said.

Because of the COVID-19 pandemic, many retailers struggled during 2020 and so far in 2021. Hendricks said this past month has made up for much of the lost revenue.

“We skipped baseball last year,” Hendricks said. “We basically didn’t have football or basketball this year, so there’s a lot of excitement with people getting to get out and about, and I hope the sales continue.”

To sell Mississippi State products, companies and retailers must gain a license through the university and the licensing company it uses, Collegiate Licensing Company in Atlanta. Duski Hale, the university's senior legal administrator and licensing director, said more retailers have sought licenses since the championship win.

Aside from the typical cowbells and apparel, Hale said she has seen customers wanting to sell unique national championship baseball-specific products, including a foam drink holder that turns into a baseball glove.