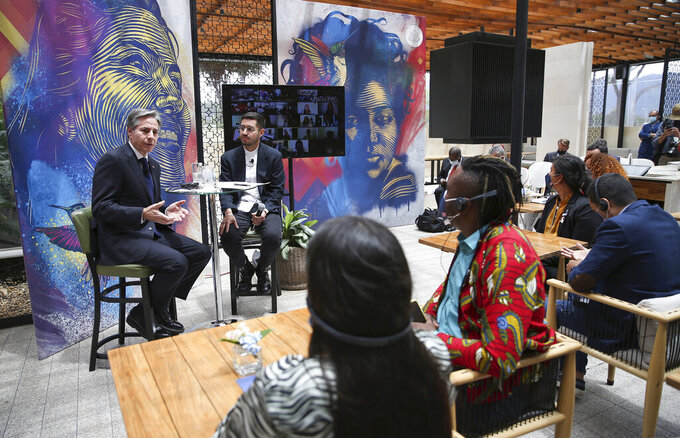 BOGOTA, Colombia (AP) — U.S. Secretary of State Antony Blinken, in his first official visit to South America, on Thursday sought to reaffirm the strategic ties between his country and Colombia while underscoring the importance of ensuring the democracies in the region meet the needs of their people.

His comments came ahead of a scheduled U.S.-Colombia dialogue in Bogota, Colombia’s capital. Blinken raised three joint challenges due to the difficulty that each government implies assuming them alone: the coronavirus pandemic, climate change and migration.

“The core focus of this trip for me, my first trip to South America as Secretary of State, is how we can make democracies deliver for our people. That is our common challenge; it’s our common responsibility,” he said. “And that’s true in our countries, and it’s true across the hemisphere. And we know that one way we can deliver is by working closely with our partners and allies on the biggest challenges we face. And that’s exactly what the United States and Colombia are doing.”

Blinken’s trip to South America began Tuesday with a visit to Ecuador, where he met with President Guillermo Lasso and democracy activists. He arrived in neighboring Colombia a day later, when he promised the U.S. would provide resources to address the immigration challenges in the region. Colombia and Ecuador have received millions of Venezuelans fleeing their country’s crises.

On Thursday, Blinken emphasized the support of the Biden administration for the peace agreement signed five years ago between the Colombian government and the now-defunct Revolutionary Armed Forces of Colombia. He highlighted the laying down of arms, the participation in politics of ex-combatants, the prosecution of those responsible for serious abuses and the creation of 16 seats in Congress for the victims.

However, he added that some challenges remain, including land titling issues, the scarce presence of authorities in rural areas and the lack of economic opportunities in those regions.

Blinken also addressed the importance of guaranteeing human rights and improving protections for journalists and human rights activists. So far this year, Colombia’s office of the United Nations High Commissioner for Human Rights has verified 53 murders of social leaders and defenders while 26 other deaths are still in the process of being verified.

“We are as committed as ever to working with Colombia on implementation of the peace accords,” he said. “But as we carry this work forward, the United States is bringing a new, more comprehensive approach to promoting security. The approach maintains a firm pillar of cooperation on strengthening law enforcement and our efforts to reduce violence, particularly in underserved rural communities, where the state, as we’ve heard, has limited albeit growing presence. The approach keeps human rights at its core.”

Ahead of Blinken’s trip, José Miguel Vivanco, director for the Americas at Human Rights Watch, in a letter asked the secretary to “pressure” President Iván Duque to improve Colombia’s human rights situation.

“President Duque’s administration has pursued several misguided and dysfunctional policies, including on drug policy, and there has been an increase in abuses by armed groups,” Vivanco wrote. “Many rural communities are at risk of experiencing a return to pre-peace process levels of violence. At the same time, the government’s response to massive urban demonstrations earlier this year involved a level of police brutality unprecedented in recent Colombian history, including dozens of killings and hundreds of arbitrary arrests.”

Addressing the complaints related to the civil unrest, Blinken told reporters that the government has a responsibility to protect the right to peaceful protest but also “uphold law and order and to protect the well-being and security and health of its citizens.”