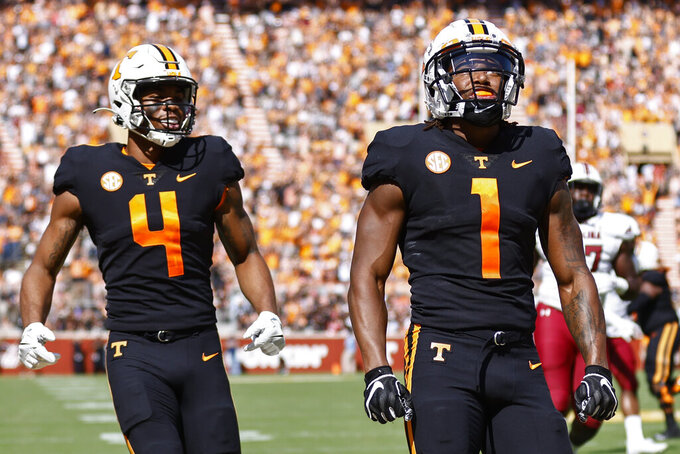 Line: Ole Miss by 2 1/2, according to FanDuel Sportsbook.

Lane Kiffin will be coaching in his first game back in Knoxville as a head coach since his lone season as Tennessee coach in 2009. A sold-out crowd awaits Kiffin and No. 13 Ole Miss in Tennessee’s first sellout since Sept. 30, 2017, against Georgia. The Rebels have new life in the SEC West with Alabama's loss to Texas A&M putting them a game out of first. Tennessee is third in the SEC East with two straight wins. Ole Miss is the Vols' lowest ranked opponent over the next month that includes road games at Alabama and Kentucky before hosting Georgia.

These are two of the nation's fastest offenses with Ole Miss second running an average of 2.89 plays per minute and Tennessee third with 2.87 plays a minute. But Tennessee's defense ranks 37th nationally allowing only 21.5 points a game compared to Ole Miss, which allows 32.2 points a game for 102nd in the country. The Vols also rank third in tackles for loss.

Ole Miss: QB Matt Corral. The junior has the second-longest streak in school history with a TD pass in 17 straight games. He is averaging 350.4 yards total offense per game and ranks nationally in the top 10 responsible for 122 points and averaging 10.2 yards per pass attempt.

Tennessee: QB Hendon Hooker. The graduate transfer from Virginia Tech is 3-1 as a starter, and he is averaging 224.2 yards per game. He has thrown 13 touchdowns with only one interception.

This is the first meeting between the teams since 2014. Ole Miss is 5-25 all-time in Knoxville. ... Tennessee has won 13 of the last 15 games in this series. ... Tennessee fans will be turning Neyland into an orange and white checkerboard for the first time since 2017 and fifth all-time. ... Ole Miss and Baylor are the only FBS teams who still haven’t thrown an interception. ... Ole Miss leads the nation with 18 successful fourth-down conversions on the season. The Rebels convert 75% of the time on fourth down ranking No. 14 in FBS. ... Tennessee has scored 28 points in the first quarter of back-to-back games for the first time in modern program history.