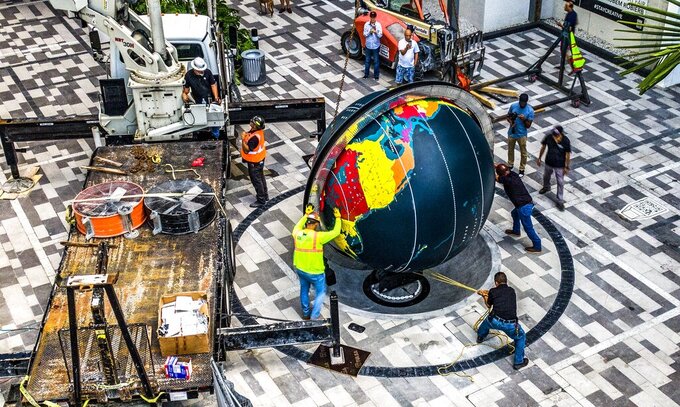 Pedro Portal, ASSOCIATED PRESS
Workers install the Pan Am Globe, which used to be at the Miami science museum at its new location at the Miami Worldcenter development in downtown Miami on Wednesday, July 13, 2022. (Pedro Portal/Miami Herald via AP)

MIAMI (AP) — Rejoice, Miami. The globe is back.

The Pan Am globe, that is — the giant, vividly colorful sphere depicting the world and its countries circa 1934 that for 55 years famously greeted visitors at the old Miami Museum of Science.

Hidden away since the science museum closed its South Miami Avenue building in 2015 before moving downtown, the globe — one of the most cherished historic relics in a city without many of them — has found a new permanent and public home.

Starting Thursday, the extensively and expensively reconditioned Earthly globe was once again on display for all to admire at, fittingly enough, Miami Worldcenter. That’s the sprawling development that occupies several blocks of the old Park West neighborhood just north of downtown’s historic center.

The long-anticipated move represents a change of environment for the 6,500-pound, painted steel globe, originally made at the dawn of international air travel in the 1930s by Rand McNally for Pan American World Airways and its Dinner Key seaplane terminal in Coconut Grove, today Miami City Hall.

The globe will sit outdoors instead of in, at the intersection of two new pedestrian paseos that traverse Miami Worldcenter, a project so extensive at 27 acres that it’s pitched by its developers as a city-within-a city, or Miami’s answer to Manhattan’s Rockefeller Center and Hudson Yards.

Though much of Worldcenter is still under construction, the developers say that by next year the landscaped paseos will be lined with shops, cafes and new commissioned public art, a la Miami Design District, so the globe in its new setting will be appreciated by thousands of people every week.

“We thought it would be great if it was public and everyone could go see it,” said Nitin Motwani, managing partner for Miami Worldcenter Associates, the master developer behind the $4 billion development. “For all of us who grew up in South Florida, when I think about symbolic structures that are part of peoples’ memories in Miami, this was an iconic thing.”

Through the intercession of the HistoryMiami museum, Motwani offered to take the globe off the hands of the Frost Museum of Science, which didn’t have a place for it at its downtown home and couldn’t figure out what to do with the weighty artifact, or how to pay the hefty amount it would take to transport, refurbish and reinstall it somewhere else. The science museum’s vacant old home, which was constructed around the globe on the grounds of the Vizcaya Museum’s historic farm village, is set to be demolished soon.

After the Frost donated the globe to Worldcenter Associates and its CIM Group partners in 2020, Motwani said the developers spent around $700,000 to transport, store, refurbish, weatherproof and reinstall the monument under the guidance of artist Franz Akerman. The work included repairing damage from a flood, while the globe sat in the former science museum building.

The globe’s new owners and location were kept under wraps until its installation at Worldcenter on Wednesday afternoon. A formal dedication will take place later but has not been scheduled yet, a spokeswoman said.

By happenstance, the new site for the globe is a couple of blocks from the Frost’s bayside building in Maurice Ferre Park.

“We are so excited to see it in its new home at Miami Worldcenter, just a few short blocks from Frost Science,” said the museum’s president and CEO, Frank Steslow, in an emailed statement. “The Pan Am globe was a memorable highlight for generations of patrons who visited our Coconut Grove location. It was important to the museum to find a partner that would care for this historic piece and ensure that the community can continue to enjoy this local icon.”

When the globe was installed at Pan Am’s Art Deco terminal in 1934, it marked the start of the first regular international passenger air service.

The airline, which ceased operations in 1991, pioneered commercial air travel between the continents when it launched regular seaplane service between Miami and Cuba and the Bahamas at Dinner Key. Within a few years, Pan Am was carrying passengers to 32 destinations from Dinner Key aboard its famed flying boats, which hopscotched across the Caribbean to Mexico, Central and South America and beyond.

The globe depicted the countries of the world as they existed then, and Miami Worldcenter kept it that way to preserve its historic integrity, Motwani said. That means there is a Soviet Union, a U.S. ally in that period, and European colonial territories in Africa and Asia.

“It’s all a part of history,” Motwani said.

The seaplanes and the globe, which sat in the middle of the Pan Am terminal, drew flocks of gawking visitors to Dinner Key for decades, until Pan Am moved to Miami International Airport and took the globe with it, said Paul George, historian-in-residence at the HistoryMiami museum. At Dinner Key, the globe attracted people who had no plans to fly, but were taken by the novel idea of travel by air to distant places around the world.

“It was one of the talks-of-the town in bygone decades, a must-see kind of thing,” George said. “Visitors would come over there in droves to see the globe into the ’40s and ’50s. It was fabulous. It just harkens back to another time, kind of a romantic time when seaplanes were going in and out of Dinner Key.”

The globe sat moldering in a leaky storage shed at Miami airport, until it was refurbished and hoisted into place at the science museum in 1960 before the new building’s roof was installed.

There, too, the globe became a magnet for visiting families. Thousands of children and adults posed in front of the globe just inside the museum entrance, making it a part of several generations of Miamians’ collective memory, George said.

“It’s so great that it’s been brought out again after being buried for so long, and we get to see it again,” the historian said. “We have lost so much of old Miami. We don’t have much in the way of artifacts. But we still have the globe.”