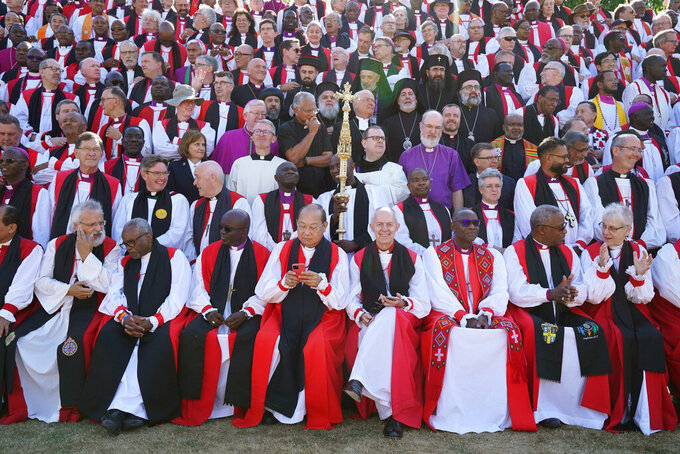 Gareth Fuller, ASSOCIATED PRESS
FILE - Archbishop of Canterbury Justin Welby, front row, centre right poses for a photo with bishops from around the world at the University of Kent, during the 15th Lambeth Conference, in Canterbury, England, Friday, July 29, 2022. Friction has been simmering within the global Anglican Communion for many years over its 42 provinces’ sharp differences on whether to recognize same-sex marriage and ordain LGBTQ clergy. In 2022, the divisions have widened, as conservative bishops – notably from Africa and Asia – affirmed their opposition to LGBTQ inclusion and demanded “repentance” by the more liberal provinces with inclusive policies. (Gareth Fuller/PA via AP, File)

Friction has long-simmered within the global Anglican Communion over its 42 provinces’ sharp differences on whether to recognize same-sex marriage and ordain LGBTQ clergy. The divisions widened this year as conservative bishops affirmed their opposition to LGBTQ inclusion and demanded “repentance” by provinces with inclusive policies.

Caught in the middle is the archbishop of Canterbury, Justin Welby, who is the Church of England’s top bishop and the Anglican Communion’s ceremonial leader. He has acknowledged the provinces’ “deep disagreement,” while urging them to “walk together” to the extent possible.

The divide came into the spotlight four months ago at the communion’s Lambeth Conference, which brings together bishops from the more than 165 countries with Anglican-affiliated churches. It was the first Lambeth Conference to which married gay and lesbian bishops were invited.

The conservative primates of Nigeria, Rwanda and Uganda refused to attend, while other bishops who share their opposition pushed unsuccessfully for the gathering to reconfirm a 1998 resolution rejecting same-sex marriage.

Now those primates, and their allies worldwide, are looking to an April conference in Kigali, Rwanda. They’re expected to discuss their dismay at some Anglican churches’ support for same-sex marriage and Welby’s approach.

Welby says neither he nor the Lambeth Conference has the authority to discipline provinces or impose demands.

In Nigeria, Anglican leaders say a formal separation from the global church is more likely than ever. They cite Welby’s Lambeth comments and the appointment of the Very Rev. David Monteith – who has been in a same-sex civil partnership since 2008 – as the Canterbury cathedral's new dean.

“If they don’t worship God the way we worship him, if they don’t believe in what we believe in… let us divide (and) we go our own way,” Aladekugbe told The Associated Press.

At Lambeth, the committee issued a stern communique – in effect demanding their LGBTQ views hold sway throughout the Anglican Communion and the “revisionist” provinces be disciplined or marginalized.

That threat was aimed at the provinces which have embraced LGBTQ-inclusive politics – including the Episcopal Church in the United States, and the Anglican churches of Brazil, Canada, New Zealand, Scotland and Wales. The Church of England refuses to conduct same-sex marriages, but some of its bishops want that to change.

The GFSA leaders contend that conservative-led jurisdictions are home to 75% of the global Anglican Communion population, which is estimated at 80 to 85 million.

“For too long the Anglican Communion has been driven by the views of the West,” Badi told news media during the conference. “We often feel that our voice is not listened to, or respected.”

Instead at Lambeth, Welby commended the sincerity of the LGBTQ-inclusive provinces: “They are not careless about scripture ... they have come to a different view on sexuality after long prayer, deep study and reflection on understandings of human nature.”

The Most Rev. Michael Curry, presiding bishop and primate of the Episcopal Church, saw this as a breakthrough.

“What shifted in the rhetoric,” he said, “was a genuine acknowledgement that both sides had arrived at their views through serious study of scripture, theology, and modern understanding of human nature.“

The conservative bishops’ frustrations with Welby intensified in October when Monteith was appointed the new dean of the Canterbury cathedral.

While Welby did not personally make the appointment, he issued a statement expressing delight. Within days, the GSFA steering committee conveyed its dismay and questioned Welby’s commitment to unity.

LGBTQ activists say most Anglican churches in Africa are led by conservative priests, including many averse to even discussing homosexuality and some fearful of losing their flock to more conservative evangelical groups.

“For Uganda, the Anglican church has almost played a leadership role in being intolerant,” said Frank Mugisha, a prominent LGBT leader in the East African country where a lawmaker once introduced legislation seeking to punish some homosexual acts with execution.

In contrast to other African provinces, the Anglican Church of Southern Africa has considered letting dioceses conduct same-sex marriages, though it has yet to take that step.

The church is based in South Africa – the only African country to legalize such unions – and also represents dioceses in several neighboring countries. It was led for years by the late Archbishop Desmond Tutu, who was a staunch advocate of LGBTQ rights and a leading apartheid foe.

The Southern Africa church has been critical of Anglican leaders elsewhere on the continent who support harsh, anti-LGBTQ laws.

Bishop Allan Kannemeyer, who heads the Diocese of Pretoria, said these laws are “violations of human rights” and openly supported by some Anglican bishops.

It’s unclear what lies ahead. The GSFA leaders, in their October statement, say if Welby does not take the step up, there may be an opening for conservative bishops to increase their influence.

That topic will likely be paramount at the April meeting in Rwanda, to which GSFA bishops have been invited. It will be hosted by the Global Anglican Future Conference – known as Gafcon – which includes the archbishops of Nigeria, Rwanda and Uganda, as well as leaders of conservative Anglican entities that have already split off, like the Anglican Church in North America.

No one from the Anglican Communion’s head office in London is expected to attend.

By the April meeting, Gafcon and GFSA members might be further angered by the Church of England’s actions – its General Synod will gather in February to consider same-sex marriage proposals, including a vote allowing priests to conduct such weddings for the first time.

A significant development came in November, when Steven Croft, the bishop of Oxford, became the church’s first diocesan bishop to speak in favor of same-sex marriage. He published an essay calling for the ban to end and five other bishops publicly backed him.