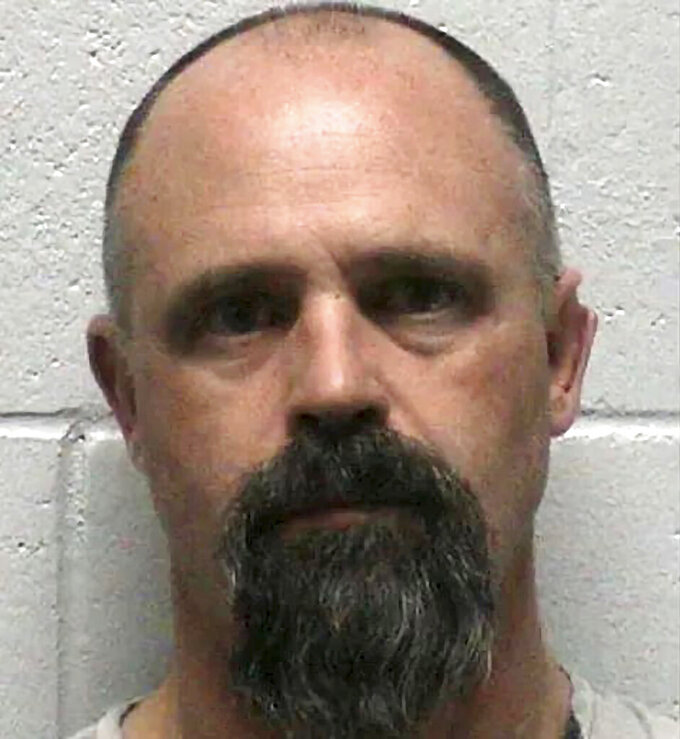 Uncredited, ASSOCIATED PRESS
FILE - This photo provided by Lyon County Detention Center shows Troy Driver, 41, of Fallon, Nev., following his arrest Friday, March 25, 2022. Lawyers for Driver, who is accused of kidnapping and killing a Fernley teenager are seeking to dismiss the murder charge by arguing he can't be tried in Lyon County because she was killed in a neighboring county. Troy Driver's public defenders filed the motion to dismiss Thursday, June 30, 2022.(Lyon County Sheriff's Office via AP, File)

RENO, Nev. (AP) — Lawyers for the man accused of kidnapping and killing a Fernley teenager are seeking to dismiss the murder charge by arguing he can’t be tried in Lyon County because she was killed in a neighboring county.

Troy Driver's public defenders filed the motion to dismiss Wednesday in justice court in Lyon County where Driver is scheduled to appear Tuesday on first-degree murder, kidnapping and other charges in the March death of 18-year-old Naomi Irion.

They say investigators acknowledged in the criminal complaint that the evidence shows Irion was killed in Churchill County where her body was found buried in the desert northeast of Fernley on March 29.

Prosecutors said in charging Driver, 41, of Fallon, days later that he abducted Irion in Lyon County from a Walmart parking lot in Fernley on March 12 “for the purpose of committing sexual assault and/or purpose of killing her.”

Such an intent would establish jurisdiction for a Lyon County murder trial under the high court's ruling in the case of Wilber Ernesto Martinez Guzman.

But Driver's lawyers say prosecutors won't be able to prove he was the kidnapper, and therefore can't establish he had the intent or committed the necessary “preparatory act” to be tried for murder in Lyon County.

Lyon County District Attorney Stephen Rye said in an email to The Associated Press on Friday that he plans to oppose the defense motion but hasn’t yet filed a formal response and anticipates the matter will be discussed at Tuesday’s status hearing in Fernley. Driver remains jailed without bail.

The Supreme Court ruled last September that Martinez Guzman could not be tried in Washoe County District Court in Reno for the 2019 killings of two women in rural Douglas County south of Carson City at the same time he was being tried for the killings of Gerald and Sharon David in Reno.

Martinez Guzman currently is serving life in prison without the possibility of parole after agreeing to plead guilty and forgo any appeals in a deal with prosecutors that took the death penalty off the table.

District attorneys in Washoe and Douglas counties originally had argued that Nevada law allowed for one trial because the facts in the cases were “intertwined,” including evidence showing Martinez Guzman shot all four victims with the same gun he stole from the Davids’ residence.

In a 5-2 decision, the Supreme Court concluded that while Nevada law provides some exceptions allowing some crimes to be prosecuted in more than one county, the prosecution had failed to satisfy the standards.

The majority rejected the prosecution's argument that Martinez Guzman “had an original plan to rob outbuildings and garages on the three properties and then changed his intent after finding the Davids’ firearm in Washoe County.”

“There is no evidence that Martinez Guzman took the firearm in preparation for the burglaries and murder in Douglas County,” the high court ruled in that case.

In Driver's case, he was arrested after deputies acting on a tip found Irion's burial site on March 29. She had been shot in the head and forensic evidence at the scene “indicated her body was not moved after death,” the new defense motion states.

“There is no evidence that the suspect had the intent to commit murder and engaged in a preparatory act requisite to the consummation of the murder while in Lyon County,” it said.

“For jurisdiction to be proper in Lyon County, Nevada, the assailant would have had to have kidnaped Ms. Irion in said county with the intent to later murder her. However, the amended criminal complaint does not assert that there existed a simultaneous act and intent of such a degree.”

“Moreover, the state will not be able to prove, by even a preponderance of the evidence that Mr. Driver kidnapped Ms. Irion.”