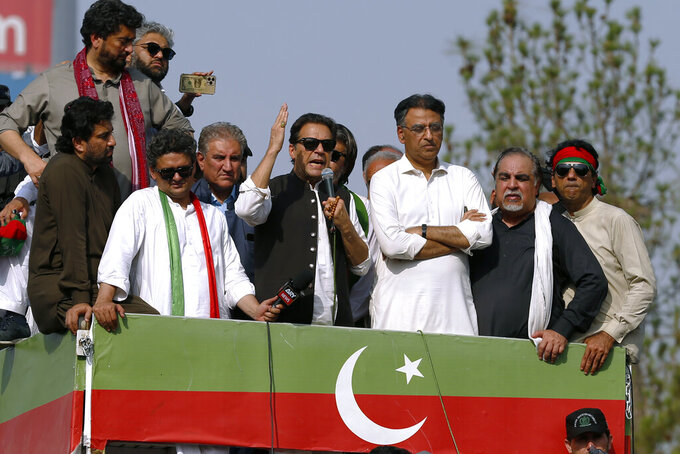 ISLAMABAD (AP) — Pakistan's defiant former Prime Minister Imran Khan called off a planned, open-ended sit-in in Islamabad on Thursday, temporarily assuaging fears of a protracted civil conflict after he led thousands on a march toward Parliament and demanded the government's resignation.

Khan's followers began converging on the Pakistani capital on Wednesday, with some 10,000 reaching the city center around midnight. Khan himself entered Islamabad as part of a large convoy of cars, buses and trucks, with demonstrators waving flags and rallying overnight. Some of his supporters clashed with police outside Parliament.

Khan gave Prime Minister Shahbaz Sharif — who replaced him in April — less than a week to call for new elections, warning that if his government didn't comply, Khan would return to the capital with 3 million supporters.

“I am giving you six days,” Khan said from a sound truck parked on the central Jinnah Avenue early Thursday, demanding also the dissolution of Parliament. “If you don’t do it after six days, I will return,” he said.

Hours later, Sharif said he was open to talks with Khan but that any decision about an early vote would be made by parliament. “You cannot dictate to us. No such blackmailing from you will be accepted," he said to applause inside the National Assembly..

Sharif also met with police officers and paramilitary Rangers in Islamabad on Thursday to personally thank them for wisely handling the protesters — without firing a single bullet. Authorities said more than 100 policemen were injured in clashes with demonstrators on Wednesday.

Khan, a former cricket star turned Islamist politician, was prime minister for over three and half years until he was ousted last month by a no-confidence vote in Parliament. Since then, he has held rallies across the country, saying his removal from office was the result of a U.S.-organized plot. Washington has denied the allegation, and Sharif has called Khan’s claim "a pack of lies."

On Wednesday, clashes erupted in the eastern city of Lahore, when riot police fired tear gas and pushed back hundreds of pro-Khan demonstrators who hurled stones as they tried to pass a roadblocked bridge near the city to board buses bound for Islamabad.

Dozens of Khan’s followers clashed with police in Islamabad, where the demonstrators set fire to bushes lining a main boulevard, sending smoke and flames rising into the sky. Altercations were also reported elsewhere, including in Karachi, where demonstrators burned a police vehicle.

The government says it has arrested more than 1,700 Khan supporters in the past 48 hours.

Life gradually returned to normalcy across the country on Thursday, after Khan called off the sit-in. That surprised even some of his supporters who continued scuffling with police near the parliament building.

Khan lost his grip on power in April when some members of his Tehreek-e-Insaf party and a key coalition partner defected ahead of the April no-confidence vote, which he also blamed on the United States.

His popularity took a dive in the final months of his rule because of increasing inflation — but in the weeks since his ouster, he has regained some of the losses mainly thanks to his rhetoric against the U.S. and Sharif’s government.

Wednesday's march on Islamabad was Khan's largest rally over the past few weeks. He personally led thousands of supporters from the northwestern city of Peshawar, urging his countrymen to reach Islamabad together with women and children to “liberate” Pakistan from the U.S.-imposed government.

Khan and his party had been urging crowds to march to the square in front of Parliament, where he was to join them. He gave no reason for calling off the sit-in.

Authorities claim Khan ended his rally after seeing poor popular response, with the crowd numbering only between 10,000 and 15,000.