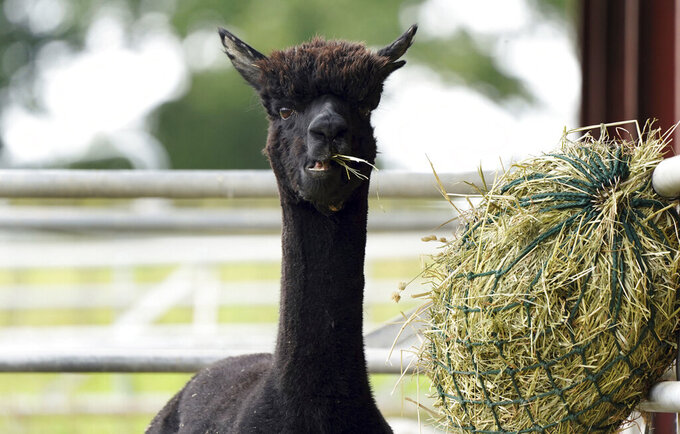 Andrew Matthews, ASSOCIATED PRESS
Geronimo the alpaca at Shepherds Close Farm in Wooton Under Edge village in England, Friday Aug. 27, 2021. Geronimo has twice tested positive for bovine tuberculosis and the government Department for Environment, Food and Rural Affairs (Defra) has ordered Geronimo to be destroyed, but owner Helen Macdonald believes the tests are returning false positives. (Andrew Matthews/PA via AP) 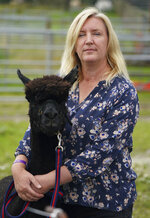 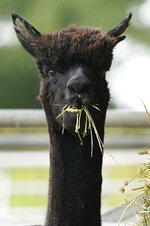 LONDON (AP) — British government veterinarians on Tuesday killed Geronimo, an alpaca whose sentence of death for carrying bovine tuberculosis made international headlines and pitted animal activists against the state.

Veterinary staff in blue overalls, masks and goggles, backed by police officers, arrived at the western England farm where the animal lives, and took Geronimo from his pen. The scene was witnessed by animal activists and journalists who have camped out at the farm in Wickwar, 110 miles (175 kilometers) west of London, vowing to stop the killing.

The Department for the Environment, Food and Rural Affairs confirmed the animal had been euthanized and a post-mortem examination would be conducted.

The controversial camelid was sentenced to death after twice testing positive for bovine TB. Geronimo's owner, Helen Macdonald, argued the tests had produced false positives and battled for a third test.

Several veterinarians backed her cause, but earlier this month a High Court judge rejected Macdonald’s request for a temporary injunction to stop the killing order and reopen the case.

Macdonald, who imported Geronimo from New Zealand in 2017, said the animal's destruction was “barbaric” and unscientific.

“The government have refused to engage in good faith," she said. “We now know they have been stringing us along for the last week, fobbing us off by saying that people were on holiday and would get back to us this week. … In fact, all the time, they were simply planning to murder Geronimo.”

Bovine TB can devastate cattle herds and hurt farm revenues. Britain has been culling animals — chiefly badgers — to stop its spread for a decade, but the practice remains contentious.

The government said that 27,000 cattle were slaughtered in 2020 to curb the spread of the disease.

"This is a terribly sad situation and our sympathies remain with all those affected by this devastating disease,” said U.K. Chief Veterinary Officer Christine Middlemiss.

“No one wants to have to cull infected animals if it can be avoided. But we need to follow the scientific evidence and cull animals that have tested positive for bTB to minimize spread of this insidious disease and ultimately eradicate the biggest threat to animal health in this country," she said.