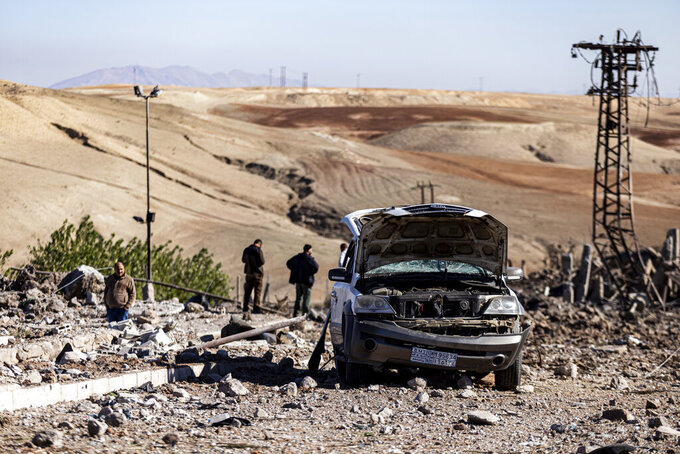 Baderkhan Ahmad, ASSOCIATED PRESS
FILE -- People inspect a site damaged by Turkish airstrikes that hit an electricity station in the village of Taql Baql, in Hasakeh province, Syria, Sunday, Nov. 20, 2022. Turkish airstrikes on northern Syria over the weekend that killed and wounded a number of Syrian soldiers could pose a setback to the recent move toward a rapprochement between the two countries after 11 years of tension and hostility. (AP Photo/Baderkhan Ahmad, File)

BEIRUT (AP) — Russia has pushed for years for a reconciliation between its ally, the Syrian government, and Turkey, which stood on opposing sides in Syria’s civil war. Recent weeks saw the first small signs of possible progress.

But that could be threatened by this weekend’s flare-up in tensions between Turkey and Syrian Kurds who control much of north and eastern Syria. Turkish airstrikes hit positions in Syria and Iraq of suspected Kurdish militants that Turkey blames for a deadly Nov. 13 bombing in Istanbul.

The strikes also hit Syrian army positions, killing and wounding a number of soldiers. Further worrying to Syria: Turkish President Recep Tayyip Erdogan's repeated warnings that his military could carry out a new ground incursion into Syria, something U.S.-backed Kurdish forces have vowed to fight.

The Russian presidential envoy in Syria, Alexander Lavrentyev, urged Turkey on Tuesday to show restraint. He said he hoped it “will be possible to convince our Turkish partners to refrain from excessive use of force on Syrian territory.”

The warnings underscore the danger of a new escalation of violence in a Syria that has been relatively calm for several years but is still torn to pieces among multiple powers by 11 years of conflict, from the long civil war to the rise and fall of the Islamic State group.

Turkey and the government of Syrian President Bashar Assad both oppose the Syrian Kurds: Ankara because it accuses them of links to Kurdish militants on its soil, Damascus because of the Kurdish hold over nearly a third of Syria’s territory, including the oil-rich east. In a further complication, U.S. troops in northeastern Syria are working with the Kurdish-led forces there.

But sharing an opponent has so far not been enough to overcome other reasons for enmity. Damascus denounces Turkey’s hold over long stretches of northern Syria along the shared border, seized in Turkey’s previous military incursions against the Kurds since 2016. During the civil war, Turkey also backed rebels trying to oust Assad, and it still protects the opposition fighters’ last territorial enclave in northwest Syria.

The deaths of Syrian soldiers in the weekend strikes further raise the temperature. The Britain-based Syrian Observatory for Human Rights, an opposition war monitor that tracks the country’s conflict, reported 18 Syrian soldiers were killed.

“Syria sees what happened as an aggression, and this affects any Iranian or Russian mediation that could open the closed doors between Ankara and Damascus,” said Muhannad Haj Ali, a former Syrian legislator and a commander with the armed wing of Syria’s ruling Baath party. “This undermines any political attempts, and therefore the Turks will have to apologize.”

Prior to the strikes, there were hopeful signs in the reconciliation effort. In July, talks were held in Moscow between the head of Syria’s National Security Council, Ali Mamluk, and Turkish intelligence chief Hakan Fidan, according to Ibrahim Hamidi, senior diplomatic editor for Syrian affairs at the London-based Asharq Al-Awsat newspaper.

Asked on Wednesday about a possible meeting with Assad, Erdogan said: “There can be no resentment in politics. In the end, steps will be taken under the most favorable conditions.” Erdogan had said as recently as October that he would consider meeting the Syrian president.

A Lebanese politician allied with Syria who regularly meets Syrian officials said the Iranians, another close ally of Moscow, recently carried a message from Erdogan to Assad. In it, Erdogan called for the return of the Syrian army to areas now controlled by the Kurds, for action to prevent Kurdish fighters from using Syrian gas and oil and for Syrian refugees in Turkey to be returned to Syria.

Erdogan is under intense pressure at home to send Syrian refugees back. Anti-refugee sentiment is rising in Turkey amid an economic crisis, with presidential and parliamentary elections set for next year.

For Russia, a deal between Damascus and Ankara would help strengthen its ally Assad and would further promote Moscow’s influence with Turkey, a NATO member that is increasingly warm to Russia.

In the message passed by the Iranians, Erdogan also said he was ready to send Turkish officials to Damascus, but Assad refused, saying they could meet in a third country, according to the Lebanese politician, who spoke on condition of anonymity because he was not authorized to speak publicly about sensitive Syrian affairs.

A senior Turkish government official denied any Iranian mediation, arguing that Tehran was “antagonistic” toward Turkey in Syria. The official said it was Russia that pushed Turkey toward reconciliation but that there was “no progress at all.” He spoke on condition of anonymity because he was not authorized to discuss the backroom diplomacy.

Turkey’s hand inside Syria is a major obstacle for Damascus.

Haj Ali called Turkey an occupying force and said it must end “terrorism,” referring to its support of Syrian opposition fighters.

Mais Kreidi, a Syria-based member of the committee charged with producing a new constitution for Syria, said Syria will not accept less than full Turkish withdrawal to restore ties.

“In Syria we have red lines and they include liberating our land,” Kreidi said.

Still, Abdurrahman of the Syrian Observatory said he doubts the talks will be hurt by the Syrian soldiers’ deaths in Turkey’s strikes, given their common interest against the Kurdish-led Syrian Democratic Forces.

“The SDF is the enemy for both sides,” Abdurrahman said.

Progress in talks was enough to raise concern among the Syrian Kurds.

Kurdish fighters “are taking this issue seriously and taking measures to address it,” SDF commander Mazloum Abdi told Asharq Al-Awsat newspaper. Any deal, he said, “will target the will of our people.”

Speaking to The Associated Press in northern Syria late Tuesday, Abdi said that there are no basis for an agreement between Turkey and Syria.

“If this happens, it will be a great national crime because this will open the way for the occupation of parts of Syria," Abdi said. "This is not acceptable.”

On Monday the SDF expressed condolences to the families of Syrian soldiers killed in the Turkish airstrikes and said Syrians should remember the “schemes of Turkish occupation and its mercenaries” — a sign of how the Kurds have also sought to promote common cause with Damascus.