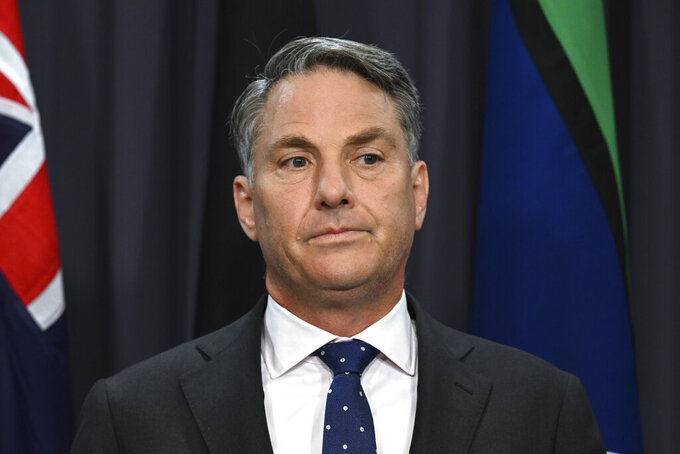 CANBERRA, Australia (AP) — Australia’s defense minister said on Wednesday he had told the nation’s military to review secrecy safeguards in response to concerns that Beijing was recruiting pilots to train the Chinese People’s Liberation Army.

“In the information that has now been provided to me by Defense, there are enough concerns in my mind that I have asked Defense to engage in a detailed examination about the policies and procedures that apply to our former Defense personnel, and particularly those who come into possession of our nation’s secrets,” Marles told reporters.

Marles declined to say whether any Australian had provided military training to the Chinese.

He said a joint police-intelligence service task force was investigating “a number of cases” among former service personnel.

“What we are focused on right now is making sure that we do examine the policies and the procedures that are currently in place in respect of our former Defense personnel to make sure they are adequate,” Marles said. “And if they are not, and if there are weaknesses in that system, then we are absolutely committed to fixing them.”

Armed Forces Minister James Heappey said authorities will make it a legal offense for pilots to continue with such training activities.

Sky News and the BBC reported that about 30 British former military pilots are currently in China training PLA pilots. The reports said the pilots are paid annual salaries of 240,000 pounds ($272,000) for the training.

Canada’s Department of National Defense was also investigating its own former service personnel, noting they remained bound by secrecy commitments after they leave the Canadian Armed Forces.

The Australian Defense Department will report to the minister by Dec. 14.

James said there were no circumstances in which former Australian military personnel should be working with the Chinese.

“Most people in the Defense Force would be disgusted if people are actually doing this, because you’re potentially training people to kill Australians in the future,” James said. “That’s just not on. It’s a moral obligation and a professional one as much as it’s a legal one."