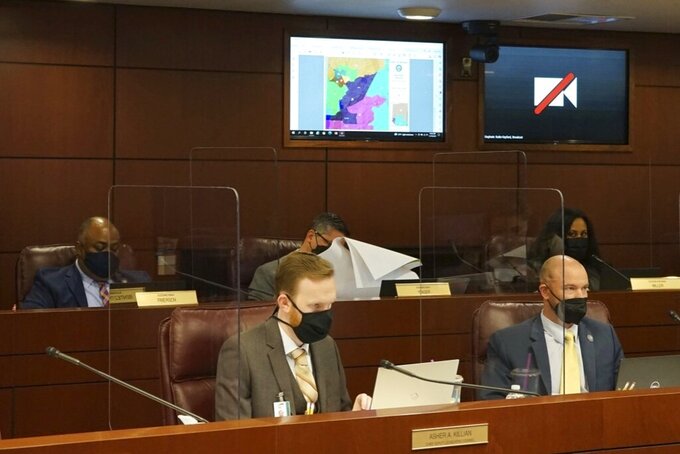 The newly drawn districts — which passed through the Democratic-controlled statehouse earlier in the day without any Republican support — will likely aid Democrats in efforts to defend U.S. House seats held by Reps. Susie Lee and Steve Horsford as the GOP attempts to reclaim a majority in Congress.

Though Republicans oversee redistricting in more states, Democrats who control the process in states like Nevada and Illinois have forcefully pushed through their proposals in a way that at least partially offset gerrymandering in states like Texas and North Carolina.

Nevada Democrats praised the maps for recognizing Asian Americans as a community of interest by uniting Spring Valley in the 3rd Congressional District. Party leaders noted that three of four congressional districts had non-white majorities, when none did when districts were drawn a decade ago.

“Maps passed today reflect our diverse and vibrant state and set us on a path for the next ten years where the voices of all those who call Nevada home are represented,” Assembly Speaker Jason Frierson and Senate Majority Leader Nicole Cannizzaro said in a joint statement.

In addition to expected criticism from Republicans, the maps faced ardent opposition from voting rights advocates who argued that Democrats had diluted Latino voting power by dividing the heart of the community in Las Vegas into multiple districts.

The map redistributes about 1 out of every 7 Latino residents from Nevada’s Democratic-leaning 1st Congressional District and reshapes it from a compact rectangle centered in downtown Las Vegas, stretching its southern boundary to include Henderson and Boulder City. President Joe Biden would have won the newly drawn district by a single-digit margin. Democrats' two-way voter registration advantage is cut in half.

Democrats said packing Latinos into a congressional district so they could have a majority risked being illegal, but voting rights advocates argued combining working-class Latino communities in east Las Vegas with affluent suburbs would make it harder to elect representatives vocally committed to issues like immigration reform.

Persaud-Zamora and other members of a “Nevadans Count” coalition put forth alternative maps that better maintained the demographic make-up of the 1st Congressional District and suggested other revisions. Coalition members applauded Democrats for incorporating feedback through last-minute changes to prevent splitting tribal communities and reallocate residents from prisons to their home communities.

Assemblyman Edgar Flores, the former chair of the Nevada Hispanic Legislative Caucus​, was the lone Democrat to vote against the maps. He declined to comment on his vote on Tuesday.

With lawsuits challenging the maps expected, Democrats said little publicly about their rationale for the new boundaries throughout a five-day special legislative session convened for redistricting. Though in most hearings in the Nevada Legislature, bill sponsors field questions from their fellow lawmakers, Democrats elected to have non-partisan staff present their proposals.

Nevada Republicans became frustrated when legislative staff responded to many of their questions by saying they were prohibited from answering any questions of a political nature. Regardless of which party is in charge, lawmakers in the minority routinely accuse the majority of manipulating maps for partisan advantage during the once-in-a-decade redistricting process.

Republicans accused Democrats of navigating the process without transparency and said maps decreasing the number of competitive districts — particularly in the statehouse — will ensure Democrats retain control of the Legislature for a decade and lead to polarization on both sides.

“(Candidates) no longer have to listen to the entire populace and only have to worry about winning a primary,” Senate Minority Leader James Settelmeyer said.