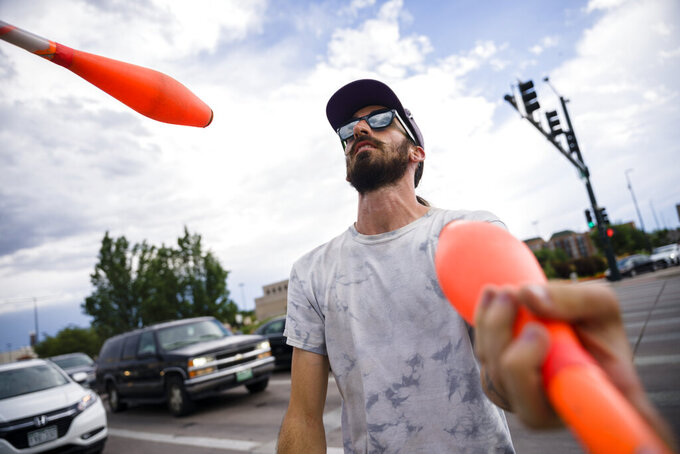 Really, though. Each makes a living juggling in the streets of Denver. You may have seen one of them on your daily work commute, stepping out onto the crosswalk at red lights to entertain motorists and passersby.

Andrew Young and Cam Resch perform a few times a week at the Quebec Street and Martin Luther King Jr. Boulevard intersection, while David Forrey keeps things in the air at 1st Avenue and University Boulevard in Cherry Creek. They’ve got it down to a science: Dash out, perform a quick show, and then zip between cars to collect what tips they can before returning to the safety of the sidewalk once the light turns green.

It’s a tricky game. If they’re out in traffic once the light has turned green, they could be fined for soliciting contributions from traveling vehicles. They also have to be careful not to obstruct pedestrian rights-of-way on the crosswalks — and look out for their own safety as well.

None of them has had any issues with police so far, they say.

Young, Resch and Forrey typically juggle about four days a week, two to three hours at a time, earning enough in tips to pay their rent, bills and buy food. In a typical week, they each can make about $400 in cash and Venmo payments.

And they’re not the only jugglers out on Denver’s streets. There’s one at South Sante Fe Drive and West Alameda Avenue and another at East Alameda and Colorado Boulevard. Weekly “flow arts” meetups happen on Sundays in Cheesman Park and can draw 10 to 80 jugglers.

It’s not a lifestyle that works for everyone, but all three jugglers like it.

After a day of juggling, they come home to a three-bedroom townhouse in RiNo. They’ve got a fourth juggling roommate, too, but Forrey said that roommate works a “real job” as a home improvement contractor.

Their other roommates, a pitbull named Ruger and a grey housecat called Diablo, are regrettably unable to juggle. (Now that would be something to see at a crosswalk, eh?)

“When you live with other circus folks, I can geek out with them on something that I’m doing,” Forrey said of the arrangement. “It’s just nice to have that all in one place.”

Out on the crosswalk, the job is grimy, and hecklers from the cars and sidewalks are commonplace. Forrey has been yelled at to “Get a real job!” before, but he doesn’t let it get to him. After all, he purposely left his “real job” in the cannabis industry for this life.

After performing for hours at a time under the hot summer sun, the three often come home dirty, sweaty and exhausted. And it’s not always worth it.

“I’ve definitely worked three hours before and made less than 40 bucks,” Forrey said.

Forrey, 28, moved to full-time juggling just under a year ago. Resch, 25, was laid off twice during the pandemic before deciding to pick up juggling full-time. Young, 33, started juggling in Denver immediately after his move from Seattle in January. Through their mutual passion and a few juggling meetups at the park, they decided to room together.

And so far, even if he may struggle to make ends meet, the ability to work for himself ultimately wins out, Forrey said. For Young, it’s the flexibility of performing on his own schedule that makes juggling for a living appealing.

For Resch, who is nonbinary and uses they/them pronouns, it’s the perfect form of self-expression, bright and visible to all.

“Not only is it something that has allowed me to get in touch with my creativity and my own personal artistic expression, but it’s also a medium in which I’m able to display a piece of me, a piece of soul, for others to enjoy,” they said.

When Resch isn’t performing, it’s common to find them out in the yard, practicing new tricks for as long as six hours a day.

“I recognize that I could work a part-time job, and live consistently more comfortably, but to me, sacrificing time that I could be putting into my art is not worthwhile in this current circumstance,” they said.

And besides, the trio is making do, paying about $2,100 in rent a month, divided between all four roommates.

Inside the apartment, the walls are lined with juggling clubs and other props, like poi (a ball attached to a short string) and contact staffs for spinning, all hung up on handmade wooden racks. A torn sectional couch in the living room is decorated with mismatched blankets and piles of Squishmallows (pillowy, all-too-collectible stuffed animals). An empty room in the unfinished basement is reserved for indoor practice.

Their only complaint? The apartment’s ceilings aren’t high enough.