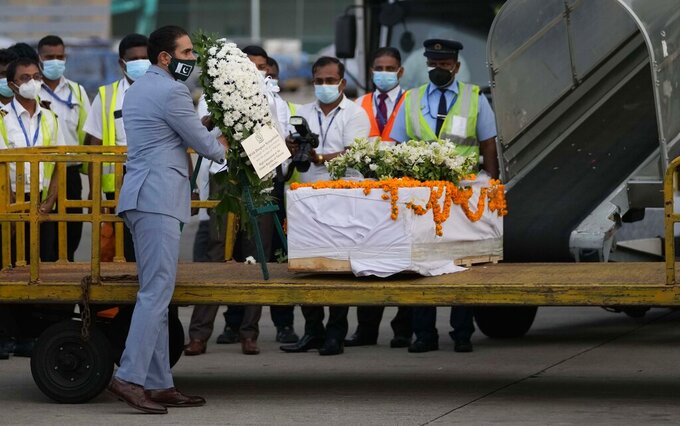 Eranga Jayawardena, ASSOCIATED PRESS
An unidentified Pakistani diplomatic official places wreath of flowers at the remains of Priyantha Kumara, a Sri Lankan employee who was lynched by a Muslim mob in Sialkot last week, after it was unloaded at an air port in Colombo, Sri Lanka, Monday, Dec. 6, 2021. (AP Photo/Eranga Jayawardena)

COLOMBO, Sri Lanka (AP) — The charred body of a factory manager who was lynched by a mob in Pakistan for alleged blasphemy was brought back to Sri Lanka on Monday.

Sri Lankan national Priyantha Kumara was assaulted by a mob of hundreds of people before being dragged into the streets and set on fire last Friday in Sialkot, Pakistan, where he helped run a sports equipment factory. Workers at the factory accused him of desecrating posters bearing the name of Islam's Prophet Muhammad.

Sir Lankan government officials received Kumara's remains in a wooden box decorated with flower garlands, before preparations to hand over the coffin to his family for his last rites.

Hours before the arrival of the remains, dozens of activist and religious groups gathered before Pakistan's mission in Sri Lanka's capital, Colombo, demanding justice for him.

“Pakistan will leave no stone unturned to apprehend those involved. They will be given very strong punishments," Pakistan's acting ambassador to Sri Lanka, Tanvir Ahmad, told Buddhist, Hindu, Muslim and Christian leaders who met him at the Pakistani mission.

Ahmad said Pakistan's prime minister had spoken with Sri Lankan President Gotabaya Rajapaksa to reassure him that Pakistani authorities were investigating the lynching.

Prime Minister Imran Khan in a phone call with Rajapaksa said Pakistani police had arrested more than 100 people in connection with the killing.