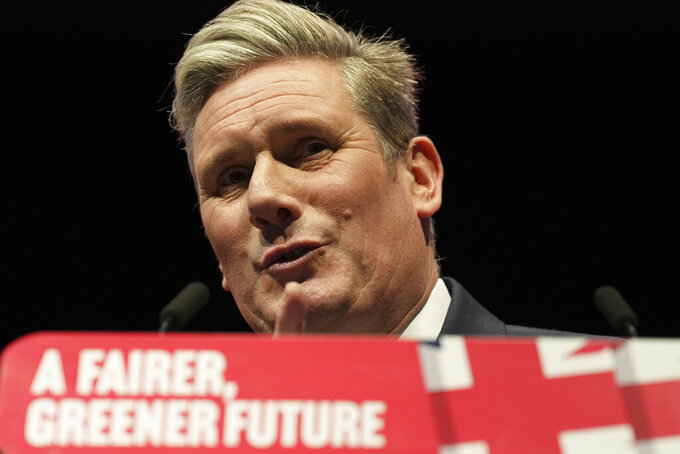 LIVERPOOL, England (AP) — The leader of Britain’s main opposition Labour Party accused the governing Conservatives on Tuesday of losing control of the economy, and promised to take the U.K. out of an “endless cycle of crisis” if his party regains power after more than a decade.

Labour leader Keir Starmer is seeking to persuade voters — and, crucially, businesses — that his left-of-center party can be trusted with the economy. The new Conservative government of Prime Minister Liz Truss made his campaign easier with one of its first acts.

The value of the British pound sank and the cost of U.K. government borrowing climbed after the government on Friday announced the biggest package of tax cuts in decades without providing a detailed breakdown of how much it would cost.

Financial markets reacted with alarm, sending sterling to a record low against the U.S. dollar of 1.0373. It later recovered to about $1.08 but still has lost about one-fifth of its value against the dollar in the past year.

“What we’ve seen in the past few days has no precedent,” Starmer said in a speech at the Labour Party’s annual conference, held in Liverpool, northwest England. “The government have lost control of the British economy — and for what? They have crashed the pound, and for what? … For tax cuts for the richest 1 percent in our society.”

Labour, one of Britain’s two main parties, has lost four straight elections, most recently a 2019 drubbing that was its worst performance since the 1930s. Britain has had four Conservative prime ministers since Labour was last in power in 2010: David Cameron, Theresa May, Boris Johnson and now Truss.

Starmer, who replaced hard-left Labour leader Jeremy Corbyn in 2020, is determined to end that run. The 60-year-old former public prosecutor aims to persuade voters that Labour is the “party of the center ground,” not the high-taxing party of urban left-wingers its detractors like to depict.

A risky set of Conservative economic policies with the stated goal of boosting economic growth by slashing regulation and cutting taxes for businesses and high-earners has helped Starmer portray Labour as the prudent choice. Opponents say the measures will send inflation, already close to 10%, even higher and worsen a cost-of-living crisis trigged by Russia’s invasion of Ukraine.

“Don’t forget. Don’t forgive,” Starmer said. He promised that under Labour, “every policy we announce will be fully costed.”

Starmer also presented a plan to stimulate the British economy by investing in alternative energy. Vowing to make the U.K. a “green growth superpower,” he said Labour would set up a publicly owned clean energy company to expand sun, wind and wave power and make Britain's electricity supply carbon-neutral by 2030.

Starmer’s speech was greeted enthusiastically by conference delegates who are in a buoyant mood as opinion polls put Labour ahead of the Tories by as much as 17%.

In one of the few negative notes at the conference, Labour lawmaker Rupa Huq was suspended by the party on Tuesday after saying about Conservative finance minister Kwasi Kwarteng: “Superficially he is a Black man.” She was discussing his elite, private-school background.

Huq later said she had contacted Kwarteng to offer "sincere and heartfelt apologies” for her “ill-judged” comments.

While the U.K.’s next general election is not due until 2024, Labour's current popularity has helped Starmer unite his often-fractious party, at least for now.

But there is still disquiet among some who want Labour to stick to the policies of nationalization and spending hikes promised by the socialist Corbyn.

Others want the party to reverse Britain’s decision to leave the European Union, but Starmer said Labour would “make Brexit work.” He also promised that a Labour government would continue Britain’s membership in NATO and support for Ukraine’s resistance to the Russian invasion.

In a gesture that symbolized Starmer’s determination to court the middle ground, Labour members held a minute’s silence in memory of Queen Elizabeth II and sang the national anthem, “God Save the King,” as the conference opened Sunday — a rebuff to opponents who accuse the party of lacking patriotism.

Starmer also made a point of quoting former Prime Minister Tony Blair’s maxim that Labour is “the political wing of the British people.”

Blair is a divisive figure within the party, vilified by many for taking Britain into the 2003 U.S.-led invasion of Iraq. But he is also the only Labour leader to have won three consecutive elections.

Former government minister Peter Mandelson, an architect of Blair’s first, landslide victory in 1997, said the Conservatives had “run out of steam” and the next election could bring “a sea change in attitudes among the electorate of the sort that we saw in 1997.”

Victoria Honeyman, associate professor of British politics at the University of Leeds, said a Labour victory in the next election “is absolutely not a done deal.”

“If the Conservatives lose, they will lose on the back of the fact that the economy has tanked,” Honeyman said. “If Labour win the next election, they are going to have to sit down and find a way to sort all this out.”