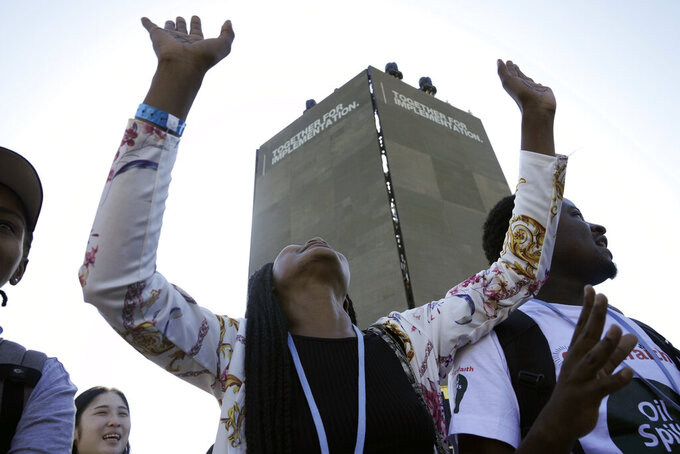 Countries’ negotiators and activists praised Biden’s speech but also noticed what was not mentioned: the issue of loss and damage. Loss and damage, where poorer nations hit by climate change driven extreme weather want reparations from the rich countries whose pollution caused global warming, is the No. 1 topic at climate talks with the U.S. in the past being reluctant to even discuss the issue.

U.S. Special Envoy John Kerry has mentioned the topic in sessions in Egypt, but Biden did not.

“We would like for the U.S. to step up their game on loss and damage,” Sierra Club President Ramon Cruz said minutes later in the room Biden spoke in. “We would of course like to see more commitment to that.”

Although she said she noticed it wasn’t mentioned, “I didn’t read anything into that,” said Jennifer Morgan, Germany’s special climate envoy and one of two national leaders tasked by the United Nations to come up with a deal on the contentious topic.

“U.S. President Biden made it very clear that the climate crisis is a major top priority for the United States domestically in getting laws passed, internationally in partnership with other countries,” Morgan told reporters minutes after the speech. “I think that is a very welcome speech, welcome presence by the President of the United States and that’s a positive energy coming into this conference.”

Campaigners at this year’s U.N. climate talks have awarded a handful of booby prizes to countries they said have hindered efforts in tackling climate change.

Recipients of Friday’s ‘Fossil of the Day’ award were the United States, Russia, Egypt and the United Arab Emirates.

Climate Action Network, an umbrella body of more than 1,000 environmental organizations, cited the United States for promoting a plan on corporate carbon offsets the group said would do little to reduce global greenhouse gas emissions. It called instead on the U.S. government to put up money it has already pledged to help poor nations cope with climate change.

Russia got the award for using the proceeds of its oil and gas sales to fund the invasion of Ukraine, the group said. CAN also noted the impact that the war has had on global energy security.

The group said Egypt and the UAE -- this year and next year’s climate talks hosts -- were getting the award for the second day in a row for using the meeting in Sharm el-Sheikh to organize events on the benefits of natural gas, a fossil fuel.

— UN to seek out methane emitters with data from space

— African nations push for funding to adapt to climate change

— In Egypt, host of COP27, a small step toward green energy

The United States, Germany and Egypt joined forces to accelerate the Middle Eastern nation’s green targets, declaring a faster expansion of renewable energy in the country.

The U.S., the European Union and Germany will provide a package of $500 million to finance and facilitate Egypt’s transition to clean energy, President Joe Biden announced in the Egyptian seaside resort of Sharm el-Sheikh where he attended the U.N. climate conference.

Biden also announced that they would work with Egypt to reduce green gas emissions through capturing “nearly 14 billion cubic meters of natural gas, which Egypt currently flares, vents or leaks from its oil and gas operations.”

“Because of this cooperation, Egypt has elevated its climate ambition,” Biden said, referring to the climate goals nations are required to submit to the United Nations in line with the Paris Agreement.

Egypt failed its previously-announced goal of producing 20% of its electricity from renewables and the country’s now-revised goal is to reach 42% of electricity generated by renewables in 2035. The new package projects Egypt will now reach the goal five years early.

The Arab world’s most populous country accounts for only 0.6% of global carbon dioxide emissions. But it is among the most vulnerable nations to climate change, especially rising sea levels which threatens the Nile Delta, the country’s breadbasket.

An initiative sponsored by the United States and the United Arab Emirates said it doubled its pledged investment to more than $8 billion in climate-smart agriculture and food system innovations.

“We’ve seen a significant increase,” said U.S. Agriculture Secretary Tom Vilsack. “It’s an opportunity for us to have a virtual platform, where folks can then exchange ideas, keep people informed about the various innovations sprints.”

He said the initiative now includes more than 275 government and non-government partners and focuses on the reduction of methane and the efficient use of fertilizers. Methane is one of the three main types of heat-trapping greenhouse gases, and is around 80 times more potent than carbon dioxide in the short term.

Vilsack also said they were working in southern Asia to help smallholder farmers by providing them with more data on weather patterns. The Agriculture Department were also working on using genetics, for example in rice cultivation.

“There’s an awful lot going on in this space. And we just got started. And over the course of the next couple of years, we’ll see more specific results,” he said.

The success of U.N. climate talks will be judged by whether commitments are made to set up a financial facility to help poorer countries pay for the effects of climate change, a negotiating group of developing countries said.

Aissatou Diouf, a spokesperson for the Least Developed Countries group, says funding from industrialized nations for countries who have suffered climate-related harms, known as loss and damage, are central to the success of the talks.

“We are urging the industrialized nations not to push the issue of loss and damage under the carpet,” Diouf said.

The influential group of some 46 countries is also demanding that industrialized nations to fulfill the Glasgow Pact pledge to double adaptation finance to $40 billion until 2025.

Protestors at the U.N. climate summit in Egypt on Friday condemned the proposed controversial East African Crude Oil Pipeline that runs through Uganda and Tanzania.

Philbert Aganyo, a protester with the group Green Faith Kenya who was at the COP27 protest called the pipeline “1,443 kilometers of pollution, pain and misery.”

“The reason we are protesting here at COP27 is because the main oil producers are here in this summit. Why are we inviting polluters to conversations of an issue they caused?” Aganyo asked.

The pipeline is owned by Total Energies, China National Offshore Oil Corporation and the Ugandan and Tanzania governments and has drawn criticism from international environmental groups and communities along the proposed route.

U.N.-appointed experts have joined growing calls for the release of a jailed Egyptian pro-democracy activist whose family says he escalated his hunger and water strike earlier this month.

The experts’ call on Friday comes after prison authorities informed the family of Alaa Abdel-Fattah that there was “a medical intervention” with the activist on Thursday. It also comes as Egypt hosts the U.N. conference on climate change, which has shed light on the country’s human rights record.

Abdel-Fattah is serving a five-year term on charges of spreading false news. The activist has spent much of the past decade in prison on what rights groups say are politically motivated charges.

The U.N.-appointed experts also called on the Egyptian government to review the cases of other jailed activists on similar charges.

Dozens of environmental activists have gathered inside the U.N. climate conference venue, protesting against the continued global investment in fossil fuels.

The protesters called for negotiators at the conference, known as COP27, particularly those from the world’s largest emitters to pay more to address the impacts of climate change in poorer countries in Africa.

Nigerian Activist Lucky Abeng, from the Pan-African Climate Justice Alliance, said they would continue pressure world leaders to do more for countries who “contribute nothing or less in changing the climate.”

Africa is responsible for just 4% of global emissions despite making up 17% of the world’s opulation, but is one of the regions most vulnerable to climate change.

“We will continue to make our voices loud,” Abeng said. “We will not be intimidated.”

Scores of countries including the United States, India, Australia, Kenya, and the European Commission have launched a 12-month plan to boost technologies that would help tackle global warming.

On the sidelines of the U.N. climate talks in Egypt, countries representing over half the world’s economy announced dozens of 'priority actions' in the areas of power generation, road transport, agriculture, and steel and hydrogen production.

Scientists say that in order to limit global warming to 1.5 degrees Celesius (2.7 Fahrenheit) by the end of the century, the world economy needs to decarbonize by 2050, meaning only as much greenhouse gas should be released as can be absorbed by natural or artificial means.

U.S. climate envoy John Kerry said in a statement that the plan would bring governments together to “scale critical technologies and create new markets.”