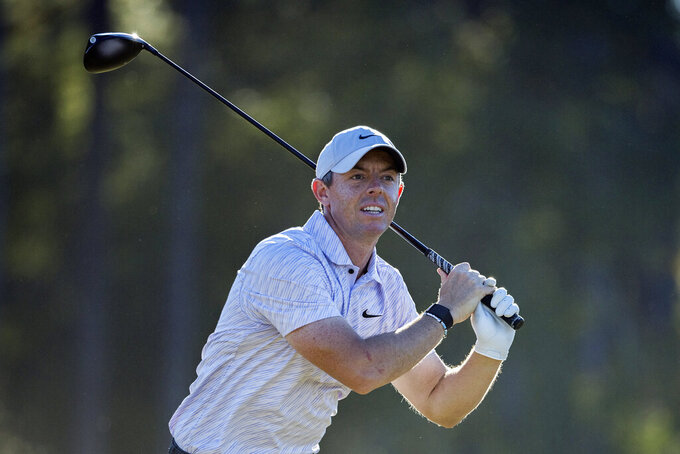 Stephen B. Morton, ASSOCIATED PRESS
Rory McIlroy, of Northern Ireland, reacts to his drive off the 17th tee during the final round of the CJ Cup golf tournament Sunday, Oct. 23, 2022, in Ridgeland, S.C. (AP Photo/Stephen B. Morton)

Notes: The $7 million purse includes $2 million to the winner, the richest prize in the history of women's golf. ... The winner's share is more than the entire purse at 15 tournaments on the LPGA Tour schedule. ... Lydia Ko leads the Race to CME Globe, but that means nothing at the CME Group Tour Championship. All 60 players in the field have an equal shot at the $2 million prize. ... Linn Grant, Inbee Park and Jessica Korda are eligible but not playing. Ariya Jutanugarn, who finished 63rd in points, got the final spot in the field. ... Nelly Korda returned to No. 1 in the world with her win last week. ... Lydia Ko has a one-point lead over Minjee Lee for LPGA player of the year. Atthaya Thitikul and Brooke Henderson would have to win this week to have any chance of winning the award. ... Ko has all but wrapped up the Vare Trophy for lowest scoring average. Thitikul would have to finish 35 strokes ahead of Ko to overtake her. ... Jin Young Ko has won the CME Group Tour Championship the last three times. She is struggling to recover from a left wrist injury.

Next week: End of season.

Notes: The final event of the European tour season is for the leading 50 players available from the DP World Tour rankings. ... Collin Morikawa, who became the first American to lead the European points list by winning last year, is not returning to defend his title. He is No. 35 in the ranking. ... Rory McIlroy will try to join Henrik Stenson (2013) as the only players to win the points title on the European tour and PGA Tour in the same season. ... Ryan Fox (No. 2), Adrian Meronk (No. 9) and Jordan Smith (No. 10) are the only players from the top 10 in the DP World Tour points who are not PGA Tour members. ... The European tour will not have a week off before starting the new season with tournaments in Australia and South Africa. ... McIlroy will be trying to become Europe's No. 1 for the fourth time. Colin Montgomerie won it eight times, including seven in a row. ... Three of the last four winners had won majors that year. U.S. Open champion Matt Fitzpatrick will have a chance to be the next.

Notes: This is the last official PGA Tour event of the year before the season resumes the first week of January at Kapalua. ... Patrick Rodgers is among 10 players who will have played eight of nine tournaments in the fall. ... For the second straight week, the defending champion is not playing because of the PGA Tour suspension for players joining LIV Golf. ... Houston Open winner Tony Finau withdrew. That leaves Brian Harman at No. 26 as the highest-ranked player in the field. Four other players from the top 50 are playing, including Mackenzie Hughes, a past champion at Sea Island. ... Jason Day is playing for the sixth time in nine weeks of the fall season. He has finished in the top 25 in his last four starts. ... Fourteen players in the field already have met criteria to be invited to the Masters. ... The leading eight players in the FedEx Cup have all won this season. At No. 9 is Thomas Detry, who has four finishes in the top 15, including a runner-up finish in Bermuda.