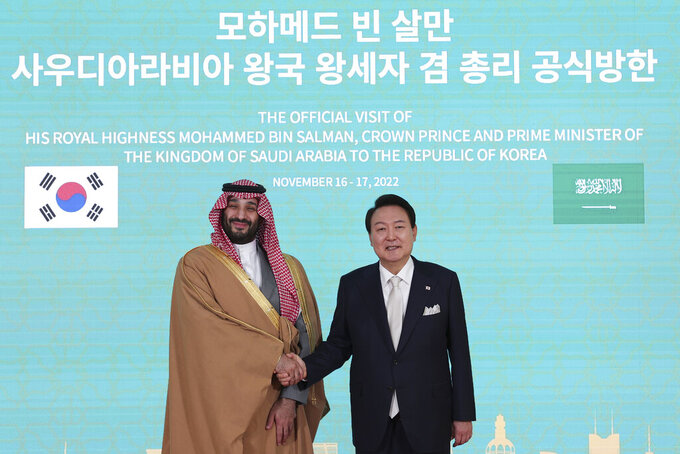 During talks attended by senior officials from both countries, Yoon said he hopes that South Korean companies will participate in megaprojects in Saudi Arabia such as Neom, a futuristic, carbon-free city planned along the kingdom’s Red Sea coast, Yoon’s office in a statement.

Yoon also wanted the two countries to cooperate on defense industries and the development of hydrogen and other new energies and promote tourism and cultural exchanges, the statement said. Prince Mohammed said he wants to drastically expand bilateral cooperation on the areas of infrastructure construction, energy and defense industries, Yoon’s office said.

The prince’s trip to South Korea spawned hopes that South Korean companies’ active participations in the Neom city project would greatly invigorate the country’s economy, like a previous construction boom in the Middle East backed up South Korea’s rapid economic rise in the 1970s.

“There are political and geopolitical risks in Middle East and it’s true that there are questions about the Neom city project. … But the Neom city can still be a new breakthrough for the South Korean economy,” the Maeil Business newspaper said Wednesday in an editorial. “The (South Korean) government must support a possible second Middle East boom by reforming regulations.”

The Neom project envisions flying cars and a 170-kilometer (105-mile) -long, zero-carbon emissions city that’s entirely enclosed and powered by Artificial Intelligence. In 2017, when Prince Mohammed announced plans to build the city, he said that “this will be a place for the dreamers of the world.”

Some observers say Prince Mohammed hopes the city will become a skyline-studded Saudi version of Dubai that will offer the kingdom jobs and cement a future beyond its vast crude oil reserves. It also would reframe a rule so far colored by the killing of Washington Post columnist Jamal Khashoggi and the kingdom’s ongoing intervention in the war in Yemen.

“Some people say the idea of the Neom city project is too utopian and doubt whether it can be really established,” said Paik Seunghoon, principal researcher at the Institute of Middle East Studies at Hankuk University of Foreign Studies in Seoul. “But it’s one of the projects that Prince (Mohammed) is pushing hard so that he will try to have (the Neom project) running to some extent.”

During the prince’s visit, South Korean companies signed more than 20 memorandums of understanding with their Saudi counterparts, non-binding contracts that are mostly about South Korean investments in Saudi Arabia, according to South Korean officials.

Paik said Saudi Arabia has signed similar non-binding deals with many other foreign companies and that the South Korean announcement Thursday lacked substance. But he still viewed them as a meaningful first step in the two countries' cooperation in such projects.

“I highly appraise (today's development). It’s like we just did our first shoveling" in a construction project, Paik said. “Most importantly, the leaders of the two countries met and agreed to push forward with something. And this shouldn’t be the end.”

Joo Won, deputy director at the Seoul-based Hyundai Research Institute, noted that there have been “more negative views toward the project” than positive ones.

“It’s a matter of financial resources. Saudi Arabia needs money to build such a city. During the period of high oil prices like these days, they can afford it. But oil prices would go down one day and the project could stop,” Joo said.