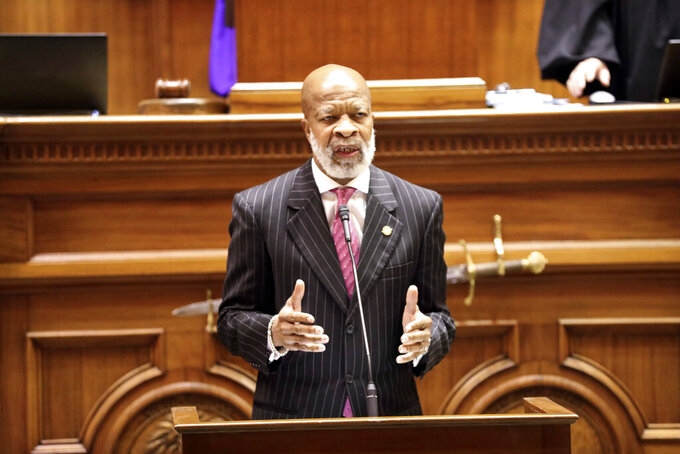 DENVER (AP) — The fliers piled up in mailboxes in central South Dakota like snow during a high-plains blizzard: “Transgender Sex Education in Schools?” one asked. “Vote Against Sex Ed Radical Mary Duvall for State Senate.”

The mailers were part of a $58,000 campaign against the five-term Republican lawmaker, an enormous sum of money in a place where the cost of running for a statehouse seat is typically in the low five figures. Despite the subject of the attack ads, Duvall was targeted not for her stance on sex education but for her opposition to a longshot bid by some conservatives to force a convention to amend the U.S. Constitution.

“I knew they were angry at me, but I had no idea this was going to be coming during my primary campaign,” said Duvall, who ended up losing her race by 176 votes.

Duvall opposed legislation that would have added South Dakota to 19 other states calling for a gathering known as a convention of states, following a plan mapped out by a conservative group that wants to change parts of the United States' foundational document. When that number hits two-thirds of the states — or 34 — under the procedure laid out in the Constitution, a convention would meet with the power to amend the 235-year-old document.

The campaign against Duvall was part of a more than $600,000 push in at least five states earlier this year by the group, Convention of States Action, and its affiliates in Republican primaries to elect sympathetic lawmakers who could add more states to its column. Much of the money comes from groups that do not have to disclose their donors, masking the identity of who is funding the push to change the Constitution.

Mark Meckler, the group's president and former head of Tea Party Patriots, issued a brief statement saying the group was committed to being active in the midterms “in a big way.”

For years, Convention of States Action has been a staple of the conservative political scene. But its engagement in primary campaigns marks an escalation at a time when parts of the conservative movement are testing the limits of the nation's political rulebook, pushing aggressive tactics from gerrymandering to voting restrictions.

The track record of the convention group's spending is spotty. In South Dakota, where the group and its affiliates spent more than $200,000 targeting four state Senate seats, Duvall was the only one of its targets to lose. And the challenger who beat her, Jim Mehlhaff, said in an interview that he thinks the group's intervention hurt him.

“I didn't appreciate the negative tone of their mailers. It probably cost me some votes,” said Mehlhaff, a former member of Pierre's city commission who had his own base of support in the district before the intervention of Convention of States. “This is South Dakota. People don't like negative campaigns.”

Mehlhaff was baffled at the notion that a possible constitutional convention factored so heavily in his race: “Convention of states is not my issue at all,” he said.

Backers argue that any amendments that emerge from the convention would have to be approved by even more states than required to call it — three-quarters, or 38 of them — ensuring that the only changes would be measures with broad support. The GOP would have the upper hand in that venue, though, as it controls the legislatures in 30 states.

One liberal group is pushing for a convention to change campaign finance laws that has won backing in four states, while another effort by conservatives seeks one to impose a balanced budget amendment. The Convention of States group is more vague on its goals, stating that it seeks a gathering that could pass amendments only to "limit the power and jurisdiction of the federal government, impose fiscal restraints, and place term limits on federal officials.”

That alarms many Democrats, who see the push as a partisan effort to write conservative goals into the Constitution. But several conservatives have also balked, fearing that a convention could open the document to changes they wouldn't favor, such as on gun control or campaign spending.

“Lots of things can happen that we can’t predict” if there’s a constitutional convention, said Walter Olson, a senior fellow at the conservative Cato Institute in Washington, D.C. “A lot of Republicans are temperamentally conservative and don’t like taking large leaps into the unknown, and they are going to be seen as dragging their heels."

The convention group has won some successes lately. Earlier this year, it persuaded South Carolina's GOP-controlled Legislature to approve a motion for a convention, making it the 19th state, all Republican-run, to sign on. But it has been stymied in some solidly conservative states such as South Dakota, whose state Senate has repeatedly voted down resolutions for a convention.

“The majority of my constituents I've talked to say ‘No, this is a bad idea and dangerous,’” Duvall said.

Robert Natelson, a retired law professor who formerly served as an advisor to Convention of States Action, said that's a result of fear-mongering. He has researched historical conventions of states and said they have clear procedures and limitations. They have occurred throughout the country's history with varied records of accomplishment, on subjects ranging from the war of 1812 to how certain Western states would share water from the Colorado River.

“This was a process designed for the people to use,” Natelson said. “If you think everything’s going well, if you’re part of the 15% of the population that has a favorable view of Congress, then you don’t want a convention.”

The movement is using money to combat skepticism. Convention of States Action and its affiliated foundation reported raising more than $10 million in 2020, according to IRS documents. As nonprofits, the organizations do not need to disclose most of their donors.

“They have gone out of their way to set up a web of dark money groups to obscure where the money is coming from and evade reporting requirements,” said Arn Pearson, executive director of the Center for Media and Democracy, which filed complaints with authorities in Arizona and Montana against the network's campaign apparatus.

In Montana, the network spent $126,000 on radio ads and mailers to support two state legislators and a candidate for a state House seat after failing multiple times to get a resolution through the Legislature. The state Commissioner of Political Practices found the group failed to register as a political organization and report its campaign spending.

According to a disclosure report it filed in Michigan, the group also spent more than $40,000 supporting statehouse candidates there. It spent $10,000 on statehouse races in North Carolina. A group it formed in Idaho reported spending more than $100,000 before the state's May 17 primary, including more than $75,000 against state Rep. Judy Boyle, a conservative who co-wrote a newspaper column with a liberal lawmaker about why a convention of states was a bad idea.

A seven-term lawmaker, Boyle said she'd been warned the group would target her and said their radio ads falsely claimed the local right-to-life group endorsed her opponent.

"I knew then that the group believes the ends justify the means and they would go to any length to smear me, which they did,” Boyle said via text message.

She eventually won her election — by six votes.