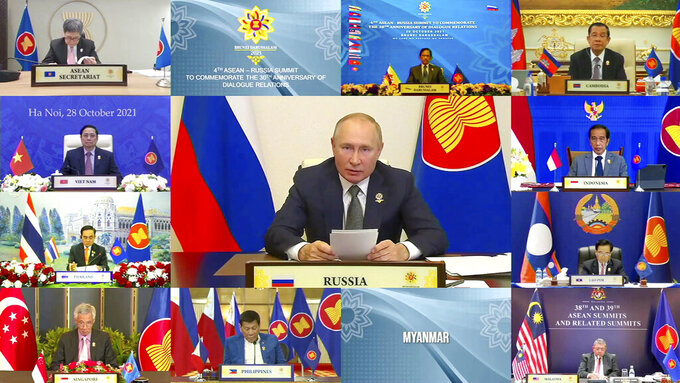 Uncredited, ASSOCIATED PRESS
In this image released by Brunei ASEAN Summit, Russian President Vladimir Putin speaks during ASEAN-Russian Summit on the sidelines of the Association of Southeast Asian Nations (ASEAN) summit with the leaders, Wednesday, Oct. 27, 2021. Southeast Asian leaders began their annual summit without Myanmar on Tuesday, Oct. 26, 2021, amid a diplomatic standoff over the exclusion of the leader of the military-ruled nation from the group's meetings. An empty box of Myanmar is seen at bottom second from right. (Brunei ASEAN Summit via AP)

KUALA LUMPUR, Malaysia (AP) — The sultan of Brunei said Thursday that Myanmar remains an integral part of the Association of Southeast Asian Nations and the bloc hopes its military government will work with an ASEAN envoy to defuse the political crisis triggered by its seizure of power in February.

Sultan Hassanal Bolkiah, who chaired a three-day online summit organized by ASEAN that also involved other world leaders, said the 10-member bloc will stand by Myanmar and continue to extend its help despite barring its military leader from the summit.

“Myanmar is an integral part of the ASEAN family and their membership has not been questioned,” he told reporters in Bandar Seri Begawan at the end of the summit, after being asked why ASEAN didn't take stronger action against Myanmar, including possible expulsion.

ASEAN barred Myanmar's military leader, Senior Gen. Min Aung Hlaing, from representing the country at the summit, in its harshest rebuke yet since the army ousted civilian leader Aung San Suu Kyi. The censure came after an ASEAN envoy was prevented from meeting Suu Kyi and other political detainees as part of a proposed dialogue on easing the crisis, in which security forces are estimated to have killed almost 1,200 civilians. The government has claimed a lower death toll.

ASEAN offered to accept a non-political representative from Myanmar at the summit, but the country decided not to participate.

“For this meeting, we have given Myanmar space while firmly upholding the principles enshrined in the ASEAN charter including that of non-interference. Only the people of Myanmar can fully resolve their internal situation,” the sultan said.

“ASEAN will always be there for Myanmar and we have continued to offer our help," he said.

The bloc has urged Myanmar to give its envoy, Brunei Second Foreign Minister Eryan Yusof, full access to all parties and to release political detainees. Myanmar insists the envoy cannot meet Suu Kyi and some others because they are facing criminal charges.

“If the current situation were prolonged into a stalemate and no progress can be made, then we should be looking at other ways into getting the desired outcome," he said in Kuala Lumpur, Malaysia.

Saifuddin said there was no discussion in ASEAN at the moment on engaging with Myanmar's political opposition, the National Unity Government, which views itself as a shadow government and met this week with U.S. officials.

President Joe Biden, who held a video meeting with ASEAN leaders and joined an 18-nation Asia meeting including his counterparts from China and Russia, has denounced “horrific violence” by Myanmar's military government and pledged that the U.S. will stand with Myanmar's people.

A regional diplomat told The Associated Press that Cambodian Prime Minister Hun Sen has hinted he may consider not inviting Myanmar's top general to a video summit of more than 50 Asian and European countries that Cambodia will host next month.

There have been concerns that European leaders may skip the summit and instead send lower-ranking representatives if Min Aung Hlaing is there, according to the diplomat, who spoke on condition of anonymity because he wasn't authorized to talk to the media.

ASEAN also agreed to deepen its ties with China and Australia to comprehensive strategic partnerships, Hassanal said. Despite concerns about an Australian nuclear submarine pact with the U.S. and the U.K., he expressed hope that any new security partnership would contribute constructively to regional peace and stability and compliment the regional architecture.

The deal will allow Australia to obtain nuclear-powered submarines, though they won't be nuclear armed. Some ASEAN members including Indonesia and Malaysia fear the pact could escalate tensions and spark an arms race, especially in the disputed South China Sea. China, which claims most of the sea, warned the pact would threaten regional stability.