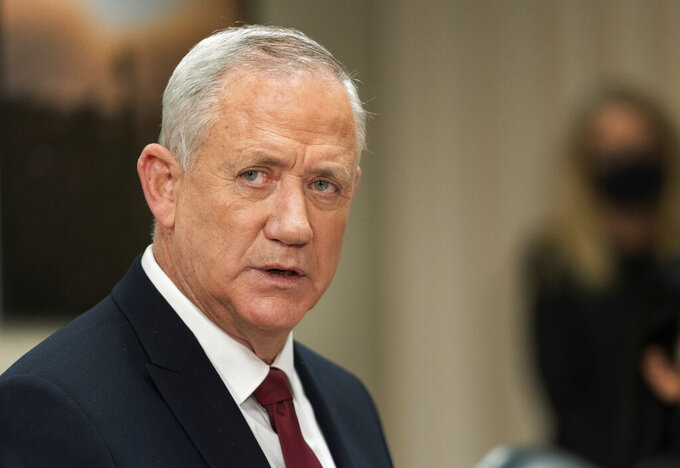 JERUSALEM (AP) — Israel’s defense minister on Monday said that Israel is helping build a U.S.-led regional air-defense alliance against Iran, and that the partnership has already thwarted attempted Iranian attacks.

Defense Minister Benny Gantz said he expected the upcoming visit by President Joe Biden to the region to further strengthen this fledgling alliance.

Israel considers Iran to be its greatest enemy, citing the country's suspect nuclear program and its support for anti-Israel proxies across the region as threats. In recent years, it has formed a series of partnerships, some in the open and others covert, with Gulf Arab countries threatened by Iran.

Monday's announcement by Gantz was the first time Israel has openly acknowledged a regionwide military alliance with Arab partners as part of its budding regional ties.

In testimony to parliament’s powerful Foreign Affairs and Defense Committee, Gantz gave few details about the “Middle East Air Defense Alliance,” or MEAD, including what other countries are members or what types of operations it has carried out.

He called it the “first element” of a shared vision “in the face of Iran’s attempts to attack the region’s countries using rockets, cruise missiles and UAVs” — unmanned aerial vehicles, or drones.

“This program is already operative and has already enabled the successful interception of Iranian attempts to attack Israel and other countries,” he said. Biden’s visit, which includes stops in Israel and Saudi Arabia in mid-July, “will support this process,” he added.

Two years ago, it established full diplomatic relations with the United Arab Emirates and Bahrain, two Gulf Arab countries that also feel threatened by Iran. It also is believed to have behind-the-scenes ties with Saudi Arabia, the most powerful Arab country in the Gulf, ties that Israel hopes the Biden visit could strengthen.

Israel last week issued a rare warning ordering citizens to avoid travel to Turkey and urging Israelis in Turkey to leave immediately, saying that Israeli citizens could be targets of Iranian attacks. Gantz said he has ordered the military to prepare a “powerful response” if Israeli citizens are harmed.

Israeli Prime Minister Naftali Bennett told reporters Monday that a joint operation with Turkey succeeded in thwarting several attacks and resulted in the arrest of several suspected operatives on Turkish soil in recent days. He said the aim was “to return the situation in Turkey and Israeli tourism to normal as quickly as possible.”

Israel's foreign minister, Yair Lapid, is expected to visit Turkey this week, in the latest sign of warming ties between the Mideast countries.

Israel's national security adviser Eyal Hulata returned Monday from an official visit to Jordan, a day before Saudi Crown Prince Mohammed bin Salman was to arrive for a meeting with the king in Amman. The Israeli Prime Minister's Office provided no additional details.

Yoel Guzansky, an expert on the Gulf at the Institute for National Security Studies, a Tel Aviv think tank, said the new partnership mentioned by Gantz is in its early stages and should not be compared to regional mutual-defense alliances like NATO.

He said “no one expects” Israelis and Arab countries to defend one another like NATO, he said. Instead, he said the countries have begun to share information, such as early warning radar intelligence, under the umbrella of the United States.

Guzansky said it was unlikely the Arab partners will be publicly identified due to the sensitivities around cooperating with Israel. Nonetheless, he said it was an “interesting development.”

He said the the U.S. decision to move Israel last year from its European Command to its Central Command, which includes Gulf Arab partners, played a key role in establishing the alliance.

“If we are looking at the bright side, it's the beginning, and from this many things can grow up," Guzansky said. "This is the first phase.”