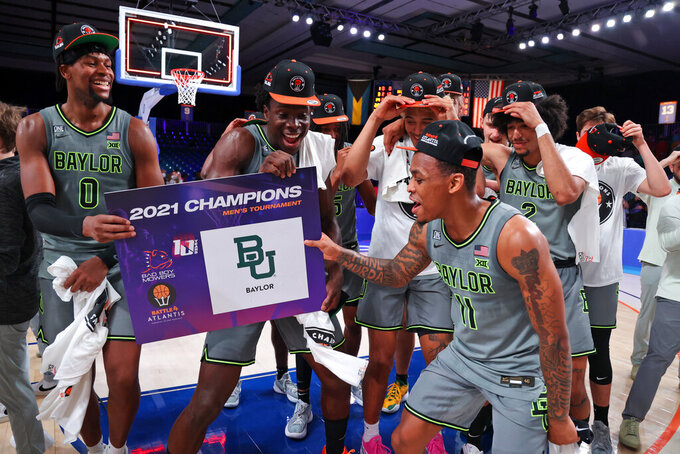 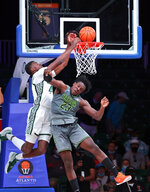 PARADISE ISLAND, Bahamas (AP) — James Akinjo held the MVP trophy as he danced on the court in a crowd of his new Baylor teammates. Around him bounced talented freshmen and multiple guys thriving in larger roles.

The sixth-ranked Bears have a different look from last year's national championship team, but the results seem familiar — down to Scott Drew's club celebrating another title-clinching victory.

Akinjo scored 15 points and Baylor beat Michigan State 75-58 on Friday for the Battle 4 Atlantis championship, using a balanced lineup to earn yet another lopsided win to start the season.

“There's no great NBA team with one player,” said Drew, his voice hoarse after three games in three days. “To win a championship, you've got to have a team, you've got to have a bench. We've had a rotation and then the big thing as coaches when you get new players, they start to trust each other.”

Look around the roster and there are plenty of examples. Akinjo went through Georgetown and Arizona before finding his way to Waco. There is a five-star freshman and McDonald's All-American in Kendall Brown, and another talented rookie forward in Jeremy Sochan.

Among the returnees, L.J. Cryer has gone from averaging 3.4 points last year to 15.8 entering Friday and forward Matthew Mayer is seeing a larger starting role after being a top sub.

It has been the right mix for Drew after losing four starters, including Davion Mitchell as the No. 9 overall NBA draft pick.

The Bears (7-0) looked dominant as they took control early in the second half, throwing some full-court defensive looks at the Spartans (5-2) and capitalizing on their mistakes.

By the end, Baylor had turned a 38-36 halftime lead into a romp, with four double-figure scorers and three others with eight points.

“We know how we want to play out there," said Adam Flagler, who scored 11 points. "So once we were able to assert ourselves, we knew we could get things going.”

Gabe Brown scored 13 points for the Spartans, who shot just 37% and missed all seven of their 3-pointers after halftime.

The Bears used an 8-0 run to stretch out to a double-digit lead, ending when Akinjo corralled a thrown-away inbounds pass against pressure by Tyson Walker and buried a 3-pointer to make it 55-42 with 13:57 left.

Baylor never let Michigan State within single digits again, improving to 6-0 all-time at Atlantis going back to its 2016 championship run.

“I was really impressed, as I was with UConn,” Michigan State coach Tom Izzo said. “But these guys seem to do it with a purpose. Nobody cared who scored. They all played pretty hard defensively. It was a nice team to watch. Unfortunately I had to watch them from the other side.”

Baylor: The Bears beat Arizona State 75-63 in Wednesday's first round, and then earned a 69-61 win against VCU in Thursday's semifinals, with that result marking their first game decided by a single-digit margin. They appeared to be headed for another close one, but their balance and athleticism allowed them to pounce when the Spartans made mistakes. Baylor has now won 13 straight dating to last year's title run in the Indianapolis bubble.

Michigan State: The Spartans hadn't lost since falling to fourth-ranked Kansas in the Champions Classic season opener. They had to grind their way through their first two games in the Bahamas by beating Loyola Chicago 63-61 on a last-second alley-oop dunk by Marcus Bingham Jr., and then beating No. 22 UConn 64-60 by closing the game on a 9-0 run. But they couldn't counter Baylor's depth after halftime.

Izzo is irked by Michigan State's season-long turnover trouble, with this marking the fourth time the Spartans have had at least 19 turnovers. That led to 22 points for the Bears. Overall, Izzo promised a “few changes” to get a better response from his team compared to its second-half performance Friday.

“As a coach, he harps on coming out, being aggressive, bringing back Michigan State basketball,” Brown said. “The second half, we didn't do that.”

If recent history is any indication, the Bears could have another title in their future.

Villanova won the 2017 Atlantis title and went on to claim a second NCAA championship in three seasons the following April in San Antonio. Then Virginia followed the same route, winning here in 2018 and then claiming the program's first national title in 2019 in Minneapolis.

But 2019 winner Michigan didn't get the chance to test the trend once the 2020 NCAA Tournament was canceled due to the COVID-19 pandemic, which ultimately put the Atlantis tournament on hiatus for a year.

Kansas headlines the 2022 field, announced during the final set of games Friday. It will be the Jayhawks' second appearance at Atlantis, the other coming in 2013. Butler, BYU, Dayton, North Carolina State, USC, Tennessee and Wisconsin round out the field.

Baylor: The Bears get a week off before hosting Arkansas-Pine Bluff on Dec. 4.

Michigan State: The Spartans host Louisville in the ACC/Big Ten Challenge on Wednesday.