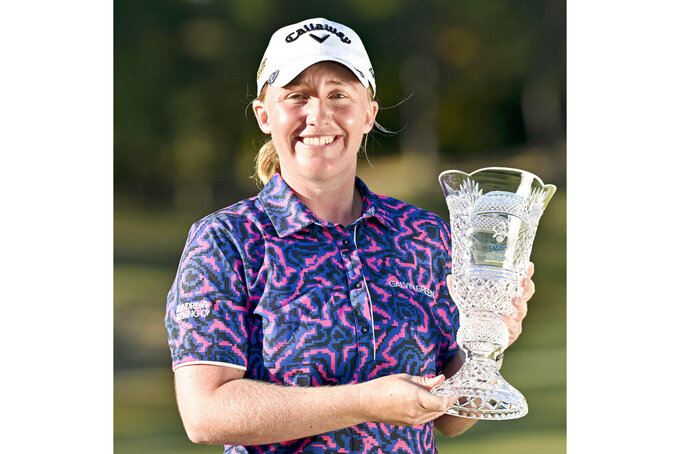 Gemma Dryburgh of Scotland is the latest example of how one good break can lead to places she never imagined.

She decided to go to Las Vegas as the first alternate for the Bank of Hope LPGA Match Play and received word at 9 p.m. on the eve of the first round that Anna Nordqvist had withdrawn because of illness.

Dryburgh, the No. 64 seed, advanced through her group by beating Gaby Lopez in a playoff, then beat Moriya Jutanugarn in 22 holes and eventually lost in the quarterfinals.

She did well enough to get into tournaments she wasn’t expecting, such as the Women’s British Open. Dryburgh thinks the result also helped her get into the Toto Japan Classic two weeks ago, which she won for her first LPGA Tour victory.

Along with the two-year exemption — she had never finished in the top 100 in four previous LPGA Tour seasons — she moved all the way up to No. 41 in the Race to CME Globe and earned a spot in the $7 million CME Group Tour Championship.

“The start of that week I wasn’t even thinking I was going to get in,” Dryburgh said. “I wasn’t even going to maybe travel because it’s such a limited field. It’s kind of unlikely that someone would pull out. I’m so glad I did.

“Might not even have been in Japan if I had not gone to Vegas. Who knows?”

And now she’s part of a 60-player field in Naples, Florida, that pays $2 million to the winner. That’s a great opportunity for someone whose career earnings on the LPGA Tour are $768,540.

Sometimes, it doesn’t take much. Consider the plight of Graeme McDowell in 2009. He was the alternate for the Chevron World Challenge when host Tiger Woods had to withdraw as his personal life was imploding.

It was the first year the holiday event was awarded world ranking points. McDowell was runner-up, and it kept him high enough in the world ranking to get in the U.S. Open at Pebble Beach, which he won. That got him into the Ryder Cup, where he delivered the cup-clinching putt.

As McDowell said back then, “It’s kind of weird how small things can shape a year.”

The PGA Tour is losing an instrumental board member with the retirement of Vic Ganzi.

Ganzi has been on the policy board since 1994. A renowned tax attorney, Ganzi was the tour’s tax advisory in the early 1980s when he and former Commissioner Deane Beman created the membership pension plan, considered one of the best retirement plans in professional sports.

“Victor has been a loyal, valued and trusted adviser to three commissioners during times of unprecedented growth and played an essential role in the financial strength of the PGA Tour,” Commissioner Jay Monahan said.

He is being replaced by Jimmy Dunne, the vice chairman and senior managing principal of the investment banking firm Piper Sandler. Dunne is president of Seminole, an Augusta National member, a regular at the AT&T Pebble Beach Pro-Am and well known to many of the top players on tour.

As expected, LIV Golf is headed to Australia as part of its second season, the home country of CEO and Commissioner Greg Norman. Instead of going to Melbourne or Sydney, the LIV event will be at The Grange Golf Club in Adelaide.

That's where Norman captured the first of his more than 75 worldwide titles, the 1976 West Lakes Classic, which he always considered his most important win. It was regarded as a big money event on the Australasian tour, and Norman's five-shot victory was worth about $8,200.

The rest of the LIV Golf schedule is expected to be announced by the end of the month.

Paul Casey is the fourth player from LIV Golf to have fallen out of the top 50 since joining the Saudi-funded league and being suspended by the PGA Tour.

Casey was at No. 31 in the world before playing his first LIV Golf event. He dropped this week to No. 51. The last time he was out of the top 50 was at the end of February 2015. He tied for third in the Honda Classic and had been there ever since.

Marc Leishman, Patrick Reed and Bryson DeChambeau previously fell out of the top 50. LIV Golf has applied for points with the OWGR and its next tournament is not until February. Next to go will be Louis Oosthuizen (48), Jason Kokrak (47), Harold Varner III (44) and Kevin Na (43).

Casey is not eligible to be exempt from any of the majors next year, depending on what the PGA Championship does with its criteria.

Justin Thomas and Nelly Korda are the latest major champions to join the PNC Championship field next month with their fathers.

Thomas and his father, Mike, a longtime club professional in Kentucky, won in 2020. Korda and her father, former Grand Slam tennis champion Petr, made their debut last year.

Still to be announced is Tiger Woods returning with his son, Charlie, after they finished runner-up last year to John Daly and his son. Woods is expected to play the PNC Championship on Dec. 17-18, two weeks after his Hero World Challenge in the Bahamas.

The PGA Tour and United Airlines have extended a marketing deal, which includes the airline awarding 55 golf teams at historically Black colleges and universities with more than $500,000 in grants for travel and recruiting. ... The Dunlop Phoenix typically attracts one of the strongest fields late in the Japan Golf Tour season, and this year it has snagged Tom Kim, Aaron Wise, Mito Pereira and Corey Conners. ... About 100 miles north of the LPGA Tour's season-ending championship, 178 players are gathered for the second stage of Q-school in Venice, Florida. The sectional was delayed a month because of Hurricane Ian. There is no cut and they will play in foursomes on two courses to make use of limited daylight. ... The PGA Tour Latinoamerica is adding a one-time tournament to the schedule next year to honor the 100-year anniversary of Roberto De Vicenzo's birth. The Roberto De Vicenzo Memorial 100 Years will be March 23-26 at Ranelagh GC in Buenos Aires, the home course of the late Argentine star. ... Grant Moir has been appointed executive director for governance of the R&A. David Rickman had been in that role since 1996 and will continue as chief of staff and chief referee for the men's and women's British Opens.

“Focusing on other people wasn't going to do me any good.” — Lexi Thompson, on why she didn't pay attention to the leaderboard at the Pelican Women's Championship. She finished one shot behind Nelly Korda.