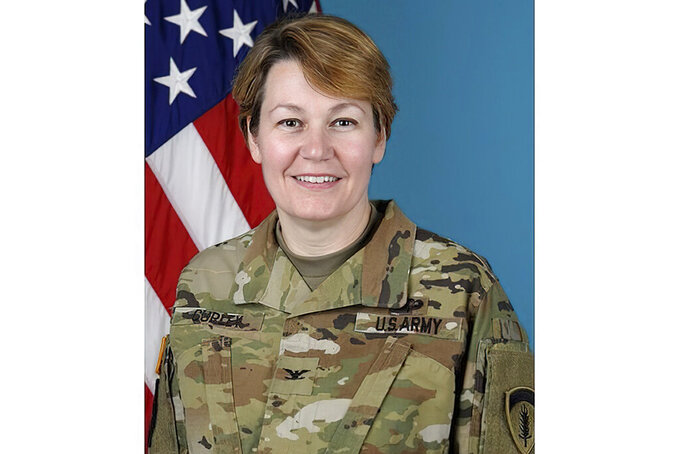 Uncredited, ASSOCIATED PRESS
This image provided by the U.S. Army shows Col. Gail Curley. When Gail Curley began her job as Marshal of the U.S. Supreme Court less than a year ago, she would have expected to work mostly behind the scenes: overseeing the court’s police force and the operations of the marble-columned building where the justices work. Earlier this month, however, Curley was handed a bombshell of an assignment, overseeing an investigation into the leak of a draft opinion and apparent votes in a major abortion case. People who know Curley described the former Army colonel, a military lawyer by training, as the right kind of person to be tasked with investigating a highly-charged leak: smart and unlikely to be intimidated but also apolitical and private. (U.S. Army via AP)

WASHINGTON (AP) — When Gail Curley began her job as Marshal of the U.S. Supreme Court less than a year ago, she would have expected to work mostly behind the scenes: overseeing the court's police force and the operations of the marble-columned building where the justices work.

Her most public role was supposed to be in the courtroom, where the Marshal bangs a gavel and announces the entrance of the court's nine justices. Her brief script includes “Oyez! Oyez! Oyez!” — meaning “hear ye” — and concludes, "God save the United States and this Honorable Court.”

Earlier this month, however, Curley was handed a bombshell of an assignment, overseeing an unprecedented breach of Supreme Court secrecy, the leak of a draft opinion and apparent votes in a major abortion case. Leaks to Politico suggest that the court seems ready to overturn Roe v. Wade, the 1973 decision that women have a constitutional right to abortion. That has sparked protests and round-the-clock security at justices' homes,demonstrations at the court and concerns about violence following the court's ultimate decision.

People who know Curley, 53, described the former Army colonel and military lawyer as possessing the right temperament for a highly charged leak investigation: smart, private, apolitical and unlikely to be intimidated.

“I’m confident that if the truth can be found out here, she’ll find it out and present it in an unbiased manner,” said retired Army Brig. Gen. Patrick Huston, her direct supervisor at the Pentagon in her last military job before the Supreme Court. Huston said he was incredibly impressed by Curley and that she had a tremendous reputation as a leader, but even as her boss of two years he didn't know if she had a spouse or children.

Through a court spokeswoman, Curley declined an interview request. She is the court's 11th Marshal and the second woman to hold the post. She is also in some ways constrained in her investigation by her position, which was created just after the Civil War, in 1867. Experts say leaking the draft opinion likely wasn’t a crime, and Curley’s investigative tools are limited. She could theoretically hire an outside law firm to assist, and in other judicial records cases the FBI has been called in. But it isn’t clear if she or others have the power to issue subpoenas to get material from journalists or the fewer than 100 people in the court — including justices — with access to a draft opinion.

The investigation doesn’t appear to have any real precedent. In 1973 the outcome in the Roe case leaked several hours ahead of its announcement. The chief justice at the time was furious and threatened lie detector tests, but the leaker quickly came forward and explained it had been an accident.

Even if the circumstances are different, overseeing an investigation isn't new to Curley. In her military career she routinely oversaw a dozen or more criminal and administrative investigations and supervised large numbers of attorneys and paralegals, Huston said. She was an authority on international law and laws surrounding armed conflict, but the investigations she oversaw throughout her career could range broadly, from criminal matters involving service members to contract issues. Huston described her as “not the sort of person who would ever be intimidated by anything."

Curley began her military career at West Point, where just under 10% of her 1991 graduating class was women. Lisa Freidel, a member of the same 25-member company as Curley, remembered her as kind and studious but also a “pretty serious person.”

“She didn't like the tomfoolery of some of the boys, some of the guys, in our company. They were young men. They do stupid stuff. She did not like that,” Freidel remembered, adding Curley “wanted to be surrounded with intellectuals, people that were smart to challenge her.”

Curley was dubbed “Swirlin’ Curl” in West Point’s yearbook, which listed her hometown as Baltimore. She was something of an introvert, Freidel said, adding that she never met Curley's parents, just an aunt and uncle, and couldn’t remember her talking about siblings.

In school, Curley was interested in American politics and government, an interest that coincided with one West Point requirement: being knowledgeable about current affairs. The New York Times was delivered every morning and cadets were supposed to be able to talk about four articles in the paper every day, Freidel remembered.

“You had to make sure your shoes were shined, your belt buckles were all shined and everything before formation and try to memorize the paper,” she said.

Still, Curley found time for extracurricular activities. A domestic affairs club she was a member of took a trip her senior year to Washington that included a meeting with Justice Sandra Day O'Connor. “See you in the White House someday!” her yearbook entry reads.

After graduating, she joined the Army's Signal Corps, which is responsible for setting up communication systems in the field.

“I’ve been very fortunate in my career,” Curley said of that time according to a 2017 news article. “As a young Army signal officer I was able to lead a large platoon in Europe during my first assignment ... that was at a time when women were not allowed to serve as platoon leaders in certain jobs.”

She eventually went on to earn a law degree from the University of Illinois College of Law and become an Army lawyer. Her career took her around the United States but also to Afghanistan for a year. Later, she spent three years in Germany as the chief legal adviser to the commander of U.S. Army Europe.

Lt. Gen. Charles Pede, the now-retired judge advocate general of the Army who chose her for that assignment, called it “a big deal.” In Germany, Curley was the senior Army attorney overseeing some 300 legal officials throughout Europe, a position Pede compared to running the European office of a large law firm. Pede called Curley a “powerhouse intellect” but also a practical problem solver and somebody who could quickly establish a good rapport with just about anybody. She also plays a good round of golf, he said.

In Europe, Curley's first boss was Lt. Gen. Ben Hodges, who is now retired, and then Lt. Gen. Christopher Cavoli. Cavoli, now a four-star general, who was nominated earlier this month to serve as the Supreme Allied Commander for NATO. Hodges described Curley's job as providing “legal review and advice on the millions of things we were doing."

“I don’t know if I’ve ever met anybody with more integrity,” Hodges said, adding that Curley also had a sense of humor and "a real dose of humility.”

The three-star general said because he liked and respected her so much, he would sometimes tease her. She had no problem holding her own, he said.

“She had the confidence of knowing that her IQ was about 40 points higher than mine," he said. "And so she could afford to be self-confident.”