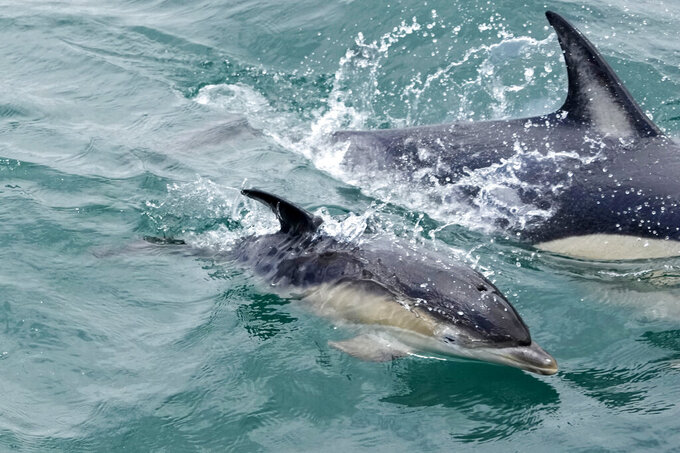 Armando Franca, ASSOCIATED PRESS
A dolphin calf swims near a boat at the mouth of the Tagus River in Lisbon, Friday, June 24, 2022. Starting Monday the United Nations is holding its five-day Oceans Conference in Lisbon hoping to bring fresh momentum for efforts to find an international agreement on protecting the world's oceans. (AP Photo/Armando Franca)

LISBON, Portugal (AP) — Delegates attending a U.N. conference in Lisbon next week might take inspiration for their efforts to protect the oceans by looking out of the venue’s windows at Portugal’s longest river, where frolicking dolphins nowadays delight locals and tourists.

The number of dolphins swimming from the Atlantic into the mouth of the River Tagus at Lisbon has increased significantly in recent times as pollution has dropped.

“In the past 10 years, with the water improvement, we started seeing wildlife much more frequently,” says local sailor and guide Bernardo Queiroz, who organizes trips to see bottlenose and common dolphins in the river.

Queiroz’s tour business aims to create awareness about the importance and the benefits of nature preservation.

Senior officials and scientists from more than 120 countries are due to attend the five-day U.N. Ocean Conference in Lisbon starting Monday.

The United Nations is hoping that a conference starting Monday will bring fresh momentum for protracted efforts to find an international agreement on protecting the world’s oceans.

No comprehensive legal framework covers the high seas. Oceans cover some 70% of the earth’s surface and provide food and livelihoods for billions of people. Some activists refer to them as the largest unregulated area on the planet.

The oceans face a “severe” threat from global warming, pollution, acidification and other problems, the U.N. says.

The conference is set to adopt a declaration that, although not binding on its signatories, could help implement and facilitate the protection and conservation of oceans and their resources, according to the U.N. The declaration is due to be endorsed on Friday.

But still beyond reach is a vital new international agreement on Biodiversity Beyond National Jurisdiction, also known as the Treaty of the High Seas.