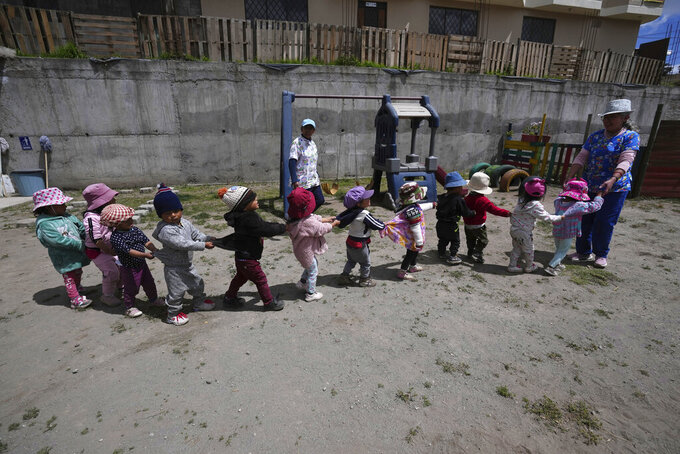 Dolores Ochoa, ASSOCIATED PRESS
Children play during recess at a government-run daycare where they are fed one meal at lunch time in Catzuqui de Velasco, a rural area without reliable basic services like water and sewage, on the outskirts of Quito, Ecuador, Thursday, Dec. 1, 2022. Child malnutrition is chronic among Ecuador's 18 million inhabitants, hitting hardest in rural areas and among the country's Indigenous, according to Erwin Ronquillo, secretary of the government program Ecuador Grows Without Malnutrition. (AP Photo/Dolores Ochoa)

QUITO, Ecuador (AP) — Sara Milena is barely 20 days old. Her mother, Tania Herrera, lives with her parents, who are the breadwinners of an Ecuadorian household where they earn $5 to $7 a day to feed five adults and support the new arrival.

That income is stretched in hopes of feeding the adults twice a day: coffee with bread, when there is any, in the morning and a plate of rice at night, or maybe not.

Originally from the Andean province of Cotopaxi, the family has lived in the capital for several years and only from time to time manages to buy chicken meat. The baby is breastfed.

Erwin Ronquillo, secretary of the government program Ecuador Grows Without Malnutrition, said child malnutrition is chronic among Ecuador's 18 million inhabitants. It is seen everywhere, but hits hardest in rural areas and among the country's Indigenous peoples, he said.

Ecuador has the second highest rate of chronic child malnutrition in Latin America, after Guatemala. According to the United Nations Children’s Fund, one in three Ecuadorian children suffers from malnutrition. Of those, 40.7% are Indigenous, though Indigenous make up only 7% of the population. In just over a fifth of the malnutrition cases, learning is affected.

Neiri Espinosa, a mother abandoned by her partner who lives in Quito's remote Pisulí neighborhood, said her children, 8 and 4 years old, do not usually eat meat. Both appear to be younger because of short stature and significant thinness of the youngest girl, telltale signs of malnutrition.

Sometimes they can afford a bit of chicken, but not often, Espinosa said.

“It is difficult to get any job (as a domestic worker), worse after the pandemic,” she said.

Monica Cabrera, a family educator with the Ministry of Social Inclusion, is assigned to the Camal Metropolitano neighborhood on the southern edge of Quito, a high-risk area where she has been robbed several times. Even so, she visits the homes of at least 25 young mothers, among whom there are two minors, aged 15 and 17. Her job is to support them while they are in their maternity process and then until the child reaches 1 year old.

Cabrera said the poorest in the city are generally Indigenous migrants from rural areas who eke out livings recycling trash, making bricks or working as street vendors.

“Those who have more have the luxury of eating twice a day,” she said, but adds that she knows of families that eat only once and sometimes not even that.

In its latest report, UNICEF says 50% of Ecuadorian households with children had difficulty obtaining the necessary food in 2021 due to the pandemic. As a result, 27% of children had their development compromised due to chronic malnutrition, the agency says.

In addition to the lack or scarcity of food, 72.3% of children lack basic services for child development, such as health and education, UNICEF says.

The government of President Guillermo Lasso, a conservative former banker, has pledged to combat chronic malnutrition by spending $350 million a year to improve health, family, education and counselling services.

Part of that support translates into a $50 monthly stipend for Tania Herrera, the mother of baby Sara Milena. To receive it, she committed to attend all child support activities to which she is summoned.

Motherhood has shelved, perhaps permanently, Herrera’s dream of becoming a soldier. Now she hopes of one day returning to her former tough job in an artisanal potato and fried banana factory.

Katherine Gualotuña lives in a home cobbled together from wood and plastic on the edge of a ravine in Zámbiza, a rural town northeast of Quito. Intense humidity fills the shack, which is no more than 25 square meters (270 square feet). There are no windows, just a doorway covered by a curtain.

“It’s that the ravine is receding and we are homeless, that’s why we are here,” she said, holding 4-month-old Arleth Paulette on her lap.

“It has been four very tired months, but beautiful. We are happy with the girl,” she added.

But the arrival of the baby has meant new expenses for an already strapped family. Her mother contributes what she can from selling street food at a park in central Quito. Her father works as a cleaner for the municipality.

Gualotuña is working on her thesis needed to graduate as a technologist in industrial mechanics. Sitting in the cramped home, she said her greatest desire is to have “money to get out of here and build a little house.”