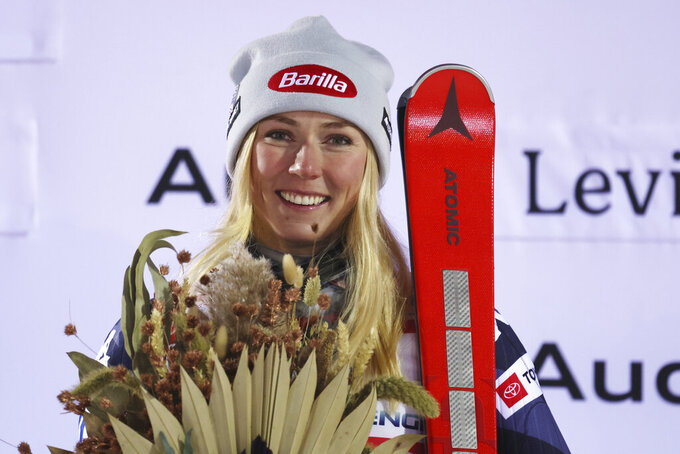 LEVI, Finland (AP) — A smiling Mikaela Shiffrin said it's hard to explain what her 75 World Cup victories mean to her because “it's a pretty big number, actually."

The American was clear about her most-recent one, though.

“I’m really happy with the feeling today,” she said Saturday after claiming the season-opening women’s World Cup race. “I’ve been racing for so many years now and every single race that I won had a special meaning."

Saturday's was her 48th slalom victory. No other skier has won more titles in a single competition than the 27-year-old Colorado native.

She reached her 67th slalom podium, also a record in women's single competition, one more than compatriot Lindsey Vonn in downhill races.

Shiffrin moved to the top with the fastest second run after placing third in the opening run in foggy conditions in Finnish Lapland to beat Anna Swenn Larsson of Sweden by .16 of a second.

With 75 World Cup wins, the four-time overall champion is only behind Swedish skiing great Ingemar Stenmark (86) and Vonn (82) have more.

Slalom Olympic champion and last season’s World Cup slalom winner Petra Vlhová of Slovakia was third, another four hundredths of a second back.

Vlhová took a lead after the first sections of the second run but made a mistake in the steep middle part, while Shiffrin accelerated toward the end for the win.

Vlhová and Shiffrin have dominated the field in this Finnish resort in recent years. Both skiers have won five slalom events, meaning the two rivals now have an equal herd of five reindeer — a traditional prize the winner receives in Levi.

No skier other than Vlhová or Shiffrin has won the traditional season-opening slalom since then-overall champion Tina Maze triumphed in 2014.

She said her battles with the Slovak rival remain wide open.

“When we both push our very very best skiing, you actually don’t know who’s going to win, it’s what makes it so exiting," she said.

Another American, Ava Sunshine, was 21st.

American skiers Paula Moltzan and AJ Hurt were among 13 skiers who didn’t finish the opening round.

Only a giant slalom that was slated to open the season in Sölden, Austria, on Oct. 22, was rescheduled for Semmering, Austria, in late December.

The organizers in Levi, which is located 110 miles north of the Arctic Circle, stored almost 60,000 cubic meters (almost 78,500 cubic yards) of snow on the resort’s Black slope in the spring to make sure the races take place.

Another slalom in Levi is scheduled for Sunday.