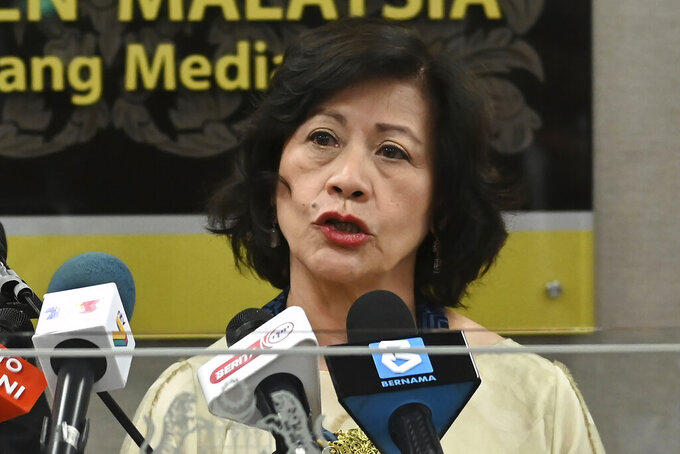 Uncredited, ASSOCIATED PRESS
FILE - U.N. Secretary-General's Special Envoy on Myanmar Noeleen Heyzer attends a press conference at the Parliament House in Kuala Lumpur, Tuesday, July 26, 2022. Heyzer arrived in Myanmar Tuesday, Aug. 16, 2022, on her first mission to Myanmar since her appointment last year, making her visit in the wake of a recent call by the world body's Security Council for an immediate end to all forms of violence and unimpeded humanitarian access in the strife-torn country. (Malaysia's Department of Information via AP, File)

BANGKOK (AP) — United Nations special envoy Noeleen Heyzer arrived in Myanmar on Tuesday on her first mission to the country since her appointment last year. Her visit follows a call by the U.N. Security Council for an immediate end to all forms of violence there and unimpeded humanitarian access to those affected by the strife.

Myanmar's MRTV state television on its evening news program showed Heyzer's initial arrival in the country’s largest city, Yangon, and then in the capital, Naypyitaw. It did not report on her agenda.

Heyzer “will focus on addressing the deteriorating situation and immediate concerns as well as other priority areas of her mandate,” U.N. spokesman Stephane Dujarric said in New York on Monday.

Her visit also comes in the wake of the military government’s recent executions of four political activists, which drew worldwide condemnation that added to concerns over reports of widespread human rights abuses.

It was not immediately known if Heyzer will meet the leader of Myanmar’s military government, Senior Gen. Min Aung Hlaing, or with the country's ousted civilian leader, Aung San Suu Kyi, who is being held in prison in Naypyitaw. She has been prosecuted in a string of criminal cases widely seen as being politically motivated by the ruling military. The government has refused to allow her to meet with any outsiders, including a special envoy from the Association of Southeast Asian Nations, to which Myanmar belongs.

Myanmar has been in turmoil since the military overthrew Suu Kyi's elected government last year and detained her with other top members of her government. The army seized power on Feb. 1, 2021, the day when her party would have started a second five-year term in office after it won a landslide victory in a November 2020 general election.

Heyzer’s predecessor as the U.N. secretary-general's special envoy on Myanmar, Christine Schraner Burgener, said last October at the end of her 3 1/2-year term that “civil war” has spread throughout the country and that the international community should consider measures aimed at replacing the military leaders of the government with people who are more constructive and want to find a peaceful solution to the army’s ouster of the elected government. She was not allowed to visit Myanmar after the army’s takeover.

Heyzer has taken a softer line so far, declaring that she seeks to engage all parties in the conflict to seek a return to peace.

“In line with my all-stakeholder approach, I have engaged with hundreds of domestic stakeholders such as the National Unity Government (NUG), the Committee Representing Pyidaungsu Hluttaw (CRPH), the National League for Democracy (NLD), ethnic armed organizations, civil society, women and youth from communities, including in hard-to-reach areas,” she told the U.N. General Assembly in June. The NUG and the CRPH are leading opposition organizations and have been officially declared “terrorist" groups by the military government, which denounces any contact with them.

Moe Zaw Oo, deputy foreign minister of the National Unity Government, said in a text message sent to journalists that it is not the right time for the U.N. special envoy to visit.

“We understand that the U.N. special envoy is fulfilling her duty, but I would like to say that it is not the right time for her. It is also uncertain how much it will benefit the country. This is the time to be very careful not to recognize the military group,” Moe Zaw Oo said. “It also needs to learn from the fact that the ASEAN’s special envoy has visited Myanmar twice, but nothing has been achieved. We are watching her trip carefully.”

Earlier this year, Heyzer drew harsh criticism for appearing to suggest in an interview with Singapore’s television news channel CNA that the pro-democracy forces in Myanmar should negotiate a power-sharing agreement with the ruling generals. Her office later said her remarks had been misinterpreted.

However, about 250 local and national civil society groups in Myanmar issued a statement saying the military could have been encouraged by her remarks to continue its violent repression.

“These statements could set a dangerous precedent, that those who take control through brutal means -– massacring, killing, raping, arresting, torturing, burning villages and people, targeting civilians using airstrikes and shelling -– be welcomed to share power,” it said.

Heyzer headed UNIFEM, a U.N. development organization that focuses on promoting women’s economic advancement, in 1994-2007. She was the first woman to serve as executive secretary of the U.N. Economic and Social Commission for Asia and the Pacific, in 2007-2014.

She also has visited Myanmar for rehabilitation programs and providing aid. In 2008-2009, as a U.N. under-secretary-general, she worked closely with a previous military government and ASEAN in recovery efforts after Myanmar was hit by Cyclone Nargis, which killed more than 138,000 people.

Associated Press writer Edie Lederer at the United Nations contributed to this report.