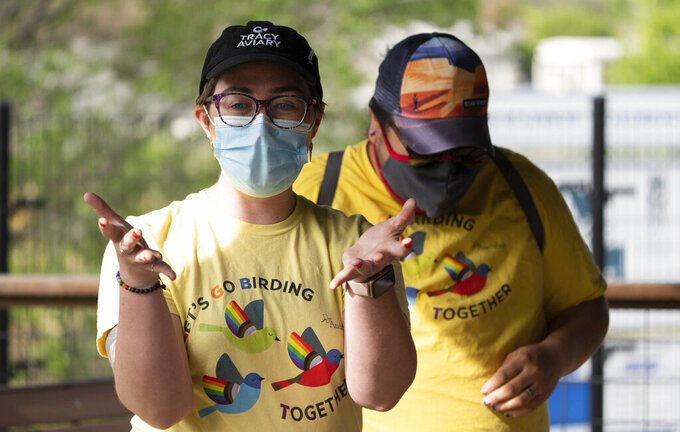 SALT LAKE CITY (AP) — As folks drank coffee and munched on doughnuts on the patio outside the Jordan River Nature Center, Kylie Jones-Greenwood gave a simple directive. Jones-Greenwood, who uses they/them pronouns, wanted each of the dozen or so guests to introduce themselves, including their name, pronouns and one word to describe how they felt that morning.

This is the sort of group where people can — and do — describe their state of mind by comparing themselves to a particular species of bird, the Salt Lake Tribune reports. Anna Swenson, who uses she/her and they/them pronouns, chose the pigeon. Another picked the spoonbill. Micah Schow, who described himself as “sleepy, perpetually,” only half-listened to introductions while looking through a set of binoculars at a hummingbird darting around nearby feeders.

This is a gathering of total “bird nerds,” as attendee Cameron Brierley put it, along with those who aspire to be. The group’s members also identify as queer or as an ally to the LGBTQ community, and this spot along the Jordan River has become a safe space to do what they love.

The Let’s Go Birding Together — yes, the acronym is LGBT — group meets on the third Saturday of the month at Tracy Aviary’s Jordan River center and mimics a group that began in New York City in 2016. The group is co-run by the Utah Pride Center and the Tracy Aviary and, like its NYC counterpart, it aims to get LGBTQ folks outdoors in a space they can feel safe — and teach them a little something about the ubiquitous and relatively unknown critters that fly over our heads.

At first, group members in New York were nervous to attract attention to themselves by being outside and queer in a big group, said Jones-Greenwood, who is the community and outreach programs coordinator for Tracy Aviary and learned about the NYC birding group through the National Audubon Society. But that anxiety went away as the group continued meeting.

“It became kind of liberating, that we can be in nature and own this space and get to know the world around us without being afraid of showing who we are,” Jones-Greenwood said, “and so I wanted to bring that here to the intermountain west. No one was really doing anything like that.”

It’s true. Salt Lake City is known as a pretty queer city. The towering nearby Wasatch mountains also mean it’s an outdoorsy city, full of climbers, bikers, hikers, skiers and so on. But it can still be challenging for LGBTQ people find places in Salt Lake City, much less in the outdoors, where they can feel safe, Jones-Greenwood said.

The tension between LGBTQ folks and the outdoors exists because of the “cultural idea” of who recreates outdoors. These people are “sturdy” and “cishet” and appear “fit and capable,” Jones-Greenwood said.

That idea doesn’t match a lot of the queer community, who find themselves getting looks or worse from others when they go outside to recreate, they said.

Nick Arteaga, who works as the Adult Programs Manager at the Utah Pride Center, added that for transgender people, access to bathrooms can also stop people from getting outdoors.

Jones-Greenwood and Arteaga hoped to address some of those issues with this birding group, created by LGBTQ folks for LGBTQ folks.

Arteaga had never birded before he helped found this group last fall during the coronavirus pandemic, but he loved the idea of getting a group of LGBTQ folks and allies together in a safer way (as in, somewhere outside) when so many of the other communal spaces for LGBTQ folks were shut down.

His experience with birding at the time was limited to liking birds and thinking they were cool. “And really cute,” he added.

Now, he’s a “baby birder,” who finds himself waking up early on some Saturday mornings to try and spot some through the pair of binoculars he’s slowly and surely learning to use.

Most people in the group start with the same level of experience as Arteaga, Jones-Greenwood said.

The center provides everyone who shows up with binoculars and a pamphlet of Utah birds. Tracy Aviary staff is also on hand to give out advice, identify a bird or bird call and generally nerd out when someone spots something cool.

On this Saturday in May, the group found redwing blackbirds (“Where does it’s name come from?” Arteaga joked as it flew by, a flash of red feathers peeking through from the mostly black ones) and some pine siskins. Also some house finches and song sparrows. The big find of the day was a black-throated gray warbler, among the first to get to Salt Lake City on its way to breed this season and one of three species of warbler the group saw that Saturday.

Learning about birds is beneficial in numerous ways, Jones-Greenwood said. First, it just feels good. You get a “serotonin hit” when you find the birds you hear chirping nearby, they said. And as you cultivate the patience and attention that birding requires, you develop the “near-superpower” of better knowing the world around you.

Plus, it’s a “mindfulness exercise.”

“You have to slow down. You have to focus in a different way,” they said, “and while you’re building that skill, you’re learning more about yourself as well.”

This particular Saturday was Swenson’s third time with the Let’s Go Birding Together group. She has to wake up and leave Provo around 8 a.m. to make it in time, but the early morning is worth it — especially when she finds a bird she hasn’t seen before. Spotting the black-throated grey warbler was a highlight, along with the chipping sparrow.

“It’s nice to add a new sparrow to the list,” she said, but the real draw has been discovering her “dream” community: other LGBTQ folks who like being in nature.