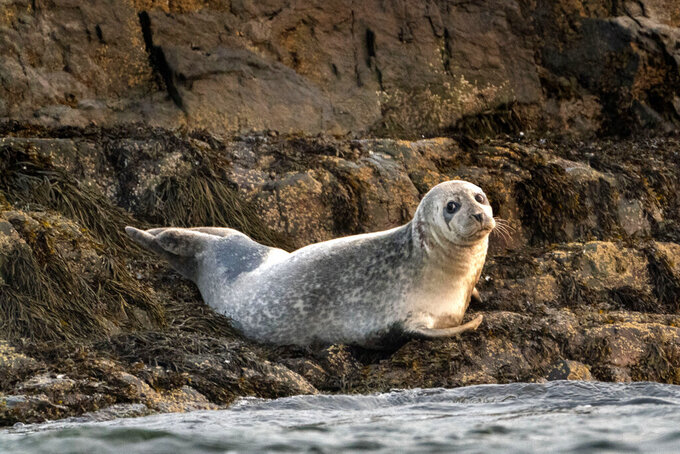 Robert F. Bukaty, ASSOCIATED PRESS
A grey seal lounges on a small island in Casco Bay, Tuesday, Sept. 15, 2020, off Portland, Maine. The federal government announced Wednesday, July 20, 2022 it is conducting a special investigation into seal deaths in Maine. About 150 of the animals have been stranded this summer, and avian flu appears to be the key reason. (AP Photo/Robert F. Bukaty, File)

PORTLAND, Maine (AP) — The deaths of dozens of seals off the coast of Maine has been deemed an “unusual mortality event,” sparking a federal investigation into strandings that appear linked to avian influenza.

The seal strandings began in June and 159 have been reported through Tuesday, the National Oceanic and Atmospheric Administration said. Most of the seals were found dead.

NOAA gave the strandings, which have affected harbor and gray seals, the “unusual” designation on Friday. That authorizes a federal investigation to try to determine the cause and minimize deaths.

The U.S. Department of Agriculture has already confirmed that samples from four stranded seals tested positive for avian flu, which has been found in more than 40 states since it was detected in winter 2021.

The risk to the public from the occurrence of avian flu in seals is low, but beachgoers should take precautions anyway, NOAA representatives said.

“We continue to ask the public not to touch ill, stranded or floating dead seals, to keep pets far away from seals, and to call their local stranding network organization to report live or dead stranded seals,” the agency said in a statement.

Most strandings have happened in the southern and central coast of the state from Biddeford to Boothbay, NOAA said. Neither animal is listed under the Endangered Species Act, but both are protected by the Marine Mammal Protection Act.

The avian flu outbreak has killed tens of million of chickens and turkeys on farms, and the virus is able to jump to mammals. It rarely affects humans.

NOAA said it's working with local, state, tribal, federal and international groups on its investigation. Marine Mammals of Maine, a rescue agency, has reported responding to dozens of seal strandings since the beginning of June.

“Strandings have continued to increase,” said Lynda Doughty, founding executive director of the group. “It has been a really busy season of strandings for us. Our groups are trying to catch all the reports, as much as possible.”

Avian influenza has also been detected in dozens of species of wild birds as well as eight species of scavenging mammals, NOAA said. The virus is also affecting Canada, where it has been found in 11 provinces, the agency said.