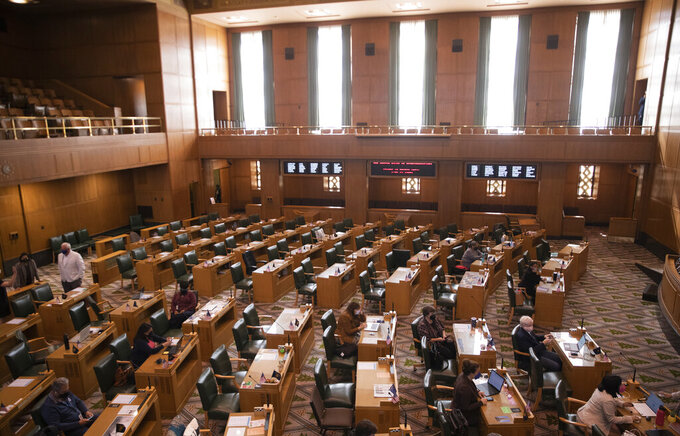 BRIAN HAYES, ASSOCIATED PRESS
Oregon State Representatives congregate in the House, prior to the meeting being adjourned due to a COVID-19 exposure, during a special legislative session for redistricting congressional maps, Tuesday, Sept. 21, 2021 at the Oregon State Capitol in Salem, Ore.(Brian Hayes/Statesman-Journal via AP)

SALEM, Ore. (AP) — Republicans in the Oregon House failed to show up for a floor session on Saturday, thwarting majority Democrats’ attempts to pass new political maps before a looming deadline.

The absence of GOP lawmakers denied the House a quorum, meaning there weren't enough members present to formally begin work. As the day drew to a close, Democratic House Speaker Tina Kotek announced that the House would adjourn until 9 a.m. Monday. If enough Republican's haven't shown up by 9:30 a.m., Kotek said, the session will end.

The Legislature has until the end of the day on Monday to participate in the once-a-decade job of redrawing the state's congressional and legislative districts in accordance with new U.S. Census numbers. This year, the redistricting includes a new, sixth U.S. House seat for Oregon, which gained political clout in the latest census.

If they miss the deadline, the job of redrawing congressional maps will fall to a panel of five retired judges appointed by the Oregon Supreme Court, and Democratic Secretary of State Shemia Fagan will be tasked with redrawing the state's legislative districts.

Republicans are upset that Democratic House Speaker Tina Kotek earlier this week rescinded a deal she made with them to split power in the redistricting debate, even though Democrats have large majorities in the Senate and House.

Saturday’s planned session followed a three-day pause due to a COVID-19 case in the Capitol in Salem.

But it wasn’t enough for the House to reach the 40-member quorum required to vote on the matter.

Though Democrats hold the majority in the state House, they don’t have enough seats to convene without a few Republicans present. Quorum rules say there must be two-thirds of lawmakers — 40 representatives on the House floor – for votes to take place. Oregon is one of the few states that require two-thirds of lawmakers to be present for any work to be done, instead of a simple majority.

Both parties have used walkouts — a tool made available by the Oregon Constitution — in the past, with Republicans relying on it in recent years. Most notably in 2019, when Republicans used it to stop a cap-and-trade bill designed.