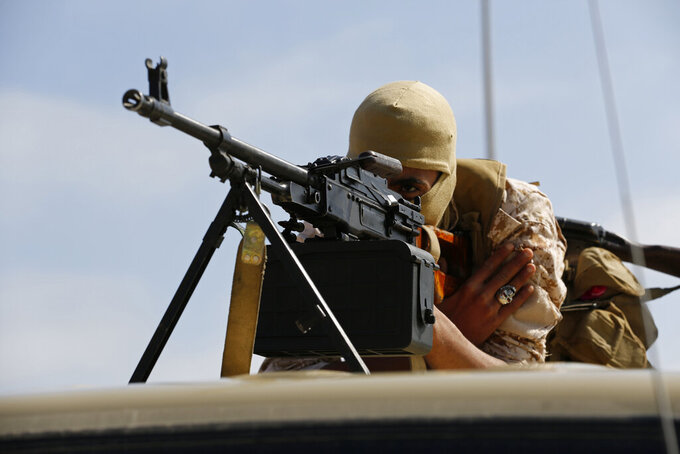 Yousef Murad, ASSOCIATED PRESS
A soldier loyal to Abdul Hamid Dbeibah, one of Libya’s two rival prime ministers, patrols a street of the capital, Tripoli, Tuesday May, 17, 2022. Clashes broke out in Tripoli after Dbeibah’s rival, Prime Minister Fathi Bashagha, announced his arrival in the city on Tuesday morning. But Bashagha left soon after the fighting started. (AP Photo/Yousef Murad)

CAIRO (AP) — An attempt by one of Libya’s rival prime ministers to seat his government in the capital of Tripoli triggered clashes Tuesday between competing militias, forcing the newly appointed premier to leave the city.

The development underscored the fragility of the situation in the war-wracked country while the two rival prime ministers blamed each other for the escalation.

Prime Minister Fathi Bashagha’s office said he had arrived in Tripoli with a number of Cabinet ministers early Tuesday — three months after his appointment to lead an interim government.

The move was likely to fuel more tensions between Libya’s rival administrations and in the morning, local media reported clashes between different militias and rival forces in central Tripoli and elsewhere in the city.

Debeibah was seen inspecting damage caused by the fighting in Tripoli and chatting with residents in the streets, according to videos broadcast by local media.

Bashagha's office said he and his ministers later left Tripoli “for the sake of the security and safety of citizens and to stop the bloodshed.” Bashagha tweeted that they had entered the city “peacefully, without using violence” but were met with a “dangerous military escalation” from armed groups loyal to his rival.

Both governments reported that at least one man was killed by gunfire and five others were wounded in the clashes.

A Western diplomat in Tripoli said Bashagha entered the city accompanied by the Nawasi Brigade militia but they faced stiff resistance from militias loyal to Dbeibah.

Another militia, known as the 444 Brigades, mediated between the rivals and facilitated the withdrawal of Bashagha, according to the diplomat, who demanded anonymity to speak about the events.

The U.N. special adviser on Libya, Stephanie Williams, urged calm and for rival parties to engage in talks to resolve their disputes.

“Conflict cannot be solved with violence, but with dialogue and mediation,” she tweeted, adding that the United Nations is ready to host all parties “in helping Libya find a genuine, consensual way forward towards stability and elections.”

In Washington, U.S. State Department spokesman Ned Price said to reporters that the U.S. was “highly concerned” by the violence in Libya and appealed for all sides to “recognize that trying to seize or retain power through force will only hurt the people of Libya.”

“It’s critical for Libyan leaders to find consensus to avoid clashes, like the ones we saw yesterday. We continue to believe that the only viable path to legitimate leadership is by allowing Libyans to choose their leaders through free and fair elections,'' Price said.

Bashagha, a former interior minister, was named prime minister by the country’s east-based parliament in February. But Dbeibah, a wealthy businessman, has refused to step down, insisting he will hand over power only to an elected government. Dbeibah was appointed last year in a U.N.-led process, mired with alleged corruption and bribery, to lead the country through elections in December that never took place. Both men hail from the powerful western city of Misrata.

Jalel Harchaoui, a Libya researcher, said the violence that unfolded during Bashagha's brief presence inside Tripoli reflected his “clear failure." Dbeibah enjoys the support of well-financed armed groups — not only in the capital but also in Misrata — that are fierce opponents of east-based military commander Khalifa Hifter, with whom Bashagha is now aligned, said Harchaoui.

The latest violence is likely to undermine ongoing talks in the Egyptian capital between the east-based parliament and the High Council of State, an advisory body from western Libya, on constitutional amendments for elections.

Over the weekend, rival militias clashed in Tripoli’s Janzour neighborhood. No casualties were reported but local authorities said there was damage to infrastructure, including a power plant. The U.N. mission in Libya condemned the clashes and said they involved indiscriminate fire and reports of heavy weapons use in the densely populated neighborhood.

Lawmakers have argued that Dbeibah’s mandate expired after Libya failed to hold presidential elections in December. The failure was a major blow to international efforts to end decade of chaos in Libya. It opened a new chapter in Libya's long-running political impasse, with rival governments claiming power after tentative steps toward unity past year.

The impasse worsened over the past two months and the closure of oil facilities, including Libya’s largest oil field, in areas controlled by Hifter’s forces was likely a move to deprive Debeibah’s government of funds and boost his rival.

The oil-rich country has been wrecked by conflict since the NATO-backed uprising toppled and killed longtime dictator Moammar Gadhafi in 2011. Libya has since been split between rival administrations in the east and west, each supported by different militias and foreign governments.