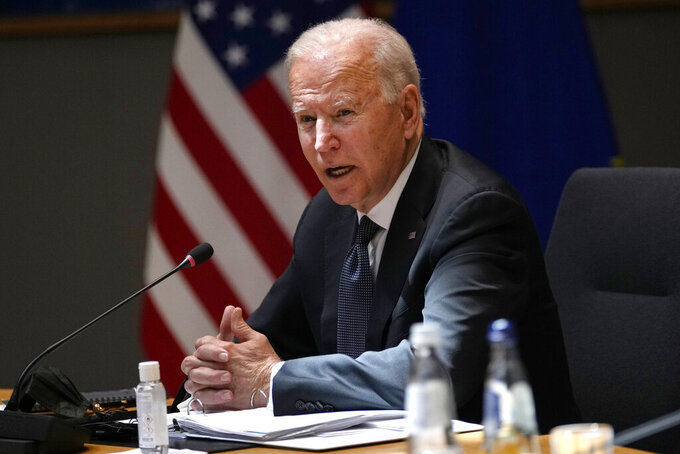 The Latest on U.S. President Joe Biden's trip to Europe:

GENEVA — A few dozen supporters of jailed Russian opposition leader Alexey Navalny have staged a colorful, cheeky rally in Geneva, in the hope of sending a message to Russian President Vladimir Putin ahead of his summit with U.S. President Joe Biden.

The rally, on a square that Swiss police have authorized for protests during Wednesday’s meeting, marked one effort to leverage public attention on some of the more hot-button issues Putin and Biden are likely to address — human rights and arms control among them.

Despite the tiny turnout — with possibly more journalists than demonstrators — Tuesday’s protest was well-orchestrated, in a show of dissent that participants said might have garnered a crackdown by security forces in Russia.

Banners called for the liberation of political prisoners generally and of Navalny himself. Protesters chanted for a “Free Russia!”

BRUSSELS — The United States and the European Union have agreed to set up a “high-level dialogue” about Russia as part of “a renewed trans-Atlantic partnership” between the U.S. and the 27-nation bloc.

A summit statement released Tuesday after talks in Brussels between U.S. President Joe Biden and the heads of two of the EU’s main institutions said they “stand united in our principled approach towards Russia" and "are ready to respond decisively to its repeating pattern of negative behavior and harmful activities.”

They also agreed to “urge Russia to stop its continuous crackdown on civil society, the opposition and independent media and release all political prisoners.”

The statement was issued as Biden prepares for a Wednesday summit with Russian President Vladimir Putin in Geneva.

The president and the EU leaders said the U.S. and EU also aim to “keep channels of communication open” with Russia for cooperation “in areas of common interest.”

They offered support for the “sovereignty, independence, and territorial integrity” of Ukraine, Georgia and Moldova in the face of Russia's attempts to expand its influence. The leaders said they also by the people of Belarus and back their demands for human rights and democracy.

GENEVA — President Joe Biden arrived in Geneva Tuesday for a high-pressure meeting with Russian President Vladimir Putin. That’s after a week-long series of confidence-building meetings between the U.S. leader and his European allies.

Biden held long days of meetings at summits of Group of Seven, NATO and European Union leaders, and he helped secure communiques expressing concern over Russia and China. On Tuesday, he presided over a tension-easing breakthrough in a long-running U.S.-EU trade dispute involving airplane subsidies.

But Biden’s Wednesday meeting with the Russian president is his most highly anticipated.

Biden plans to confront Putin on everything from Moscow’s cyberattacks to its election interference efforts and human rights abuses,. He's said he also hopes to look for areas where the United States and Russia can cooperate and to normalize the historically icy relationship between the two nations.

BRUSSELS — The trade association for producers and marketers of distilled spirits sold in the United States said the five-year suspension of tariffs outlined in deal between the U.S. and the European Union to end their 17-year dispute over aircraft subsidies will be critical to helping the industry recover from the coronavirus pandemic.

The dispute over subsidies for Boeing and Airbus saw tit-for-tat duties slapped on a range of companies that have nothing to do with aircraft production. The Distilled Spirits Council said the agreement announced Tuesday will end the EU's 25% tariff on U.S. rum, brandy and vodka, as well as the 25% U.S. tariff on liqueurs and cordials from Germany, Ireland, Italy and Spain, and on certain cognacs and other grape brandies from France and Germany.

The council said that removing the tariffs will benefit restaurants, bars and small craft distilleries that had to close during the pandemic. But it noted that the EU and the United Kingdom still have a 25% tariff on American whiskey as part of a steel and aluminum trade dispute stemming from the Trump administration.

“Until steps are taken to permanently remove these tariffs on American whiskeys, the United States’ largest spirits export category will remain at a serious competitive disadvantage in our two most important export markets,” the trade group said.

BRUSSELS — The United States and the European Union reached a deal Tuesday to end a damaging dispute over subsidies to rival plane makers Boeing and Airbus and phase out billions of dollars in punitive tariffs, the U.S. trade envoy said.

U.S. Trade Representative Katherine Tai said the two sides have come to terms on a five-year agreement to suspend the tariffs at the center of the dispute. She said they could be reimplemented if the U.S. companies are not able to “compete fairly” with those in Europe.

“Today’s announcement resolves a long-standing irritant in the U.S.-EU relationship,” Tai said, as President Joe Biden met with EU leaders in Brussels. “Instead of fighting with one of our closest allies, we are finally coming together against a common threat.”

The dispute saw tit-for-tat duties slapped on a range of companies that have nothing to do with aircraft production, from French winemakers to German cookie bakers in Europe and U.S. spirits producers in the United States, among many others.

BRUSSELS — The United States and the European Union appear close to reaching a deal to end a damaging dispute over subsidies to rival plane makers Boeing and Airbus and lift billions of dollars in punitive tariffs.

A person familiar with the discussions said U.S. and EU officials have reached principles of an agreement to end their 17-year dispute over the aircraft subsidies. The person was not authorized to discuss the matter and spoke on the condition of anonymity.

The trade dispute skyrocketed under the Trump administration, and saw tit-for-tat duties slapped on a range of companies that have nothing to do with aircraft production, from French winemakers to U.S. spirits producers.

The U.S. imposed $7.5 billion in tariffs on European exports in 2019 after the World Trade Organization ruled that the EU had not complied with its rulings on subsidies for Airbus, which is based in France. The EU retaliated last November with $4 billion in punitive duties after the WTO ruled that the U.S. had provided illegal subsidies to Boeing.

In March, weeks after Biden had taken office, the two sides agreed to suspend the tariffs.

BRUSSELS — President Joe Biden is seeking to tamp down trade tensions with European allies as he spends one last day consulting with Western democracies ahead of his highly anticipated meeting with Russian President Vladimir Putin.

After a pair of summits with Group of Seven world leaders in the U.K. and then NATO allies in Brussels, Biden meets Tuesday with European Council President Charles Michel and European Commission President Ursula von der Leyen.

The president has sought to marshal widespread European support for his efforts to counter Russia prior to his Wednesday meeting in Geneva with Putin. But the U.S.-EU relationship is not without some tensions.

Biden will meet with the top EU officials as the continent’s leaders are becoming impatient that the American president has not yet addressed Donald Trump’s 2018 decision to impose import taxes on foreign steel and aluminum.

There’s also a longstanding dispute over how much of a government subsidy each side unfairly provides for its aircraft manufacturing giant — Boeing in the United States and Airbus in the EU.