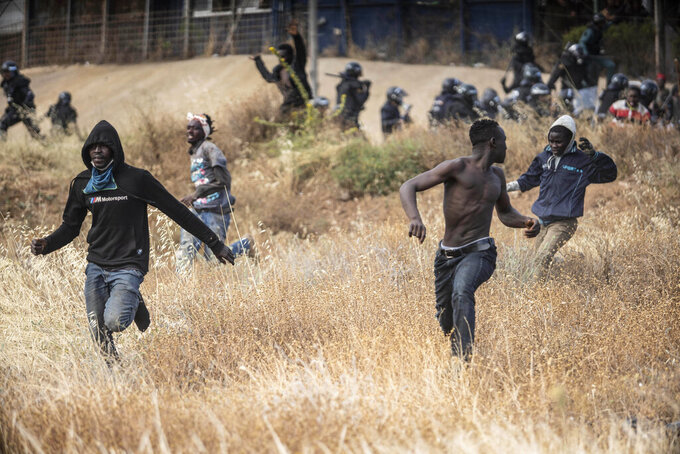 Javier Bernardo, ASSOCIATED PRESS
FILE - Migrants run on Spanish soil after crossing the fences separating the Spanish enclave of Melilla from Morocco in Melilla, Spain, Friday, June 24, 2022. Two weeks after 23 people died at the border between Morocco and the Spanish enclave of Melilla, the European Commission vowed to step up its work with Morocco on Friday to fight human smugglers using “new, extremely violent methods" and combat irregular migration into Spain. (AP Photo/Javier Bernardo, File)

RABAT, Morocco (AP) — Morocco’s state-affiliated human rights council released a report Wednesday depicting last month’s attempt by hundreds of migrants to storm the border between the North African kingdom and the Spanish enclave of Melilla as “unprecedented in nature, tactics used and scope.”

At least 23 people, mostly from Sudan and Chad, died in the attempt. The National Council on Human Rights, or CNDH, concluded that most died of asphyxiation in what authorities called a stampede, although autopsies have not yet been carried out. In addition to the deaths, 200 Moroccan and Spanish law enforcement officers and more than 70 civilians were injured in the melee.

The CNDH released a 30-page preliminary report Wednesday on the events of June 24, following a fact-finding mission to the shared border between Morocco and Spain and surrounding areas.

A leading non-governmental human rights watchdog, AMDH, said the report is incomplete, and reiterated its calls for an impartial investigation into what happened. Several rights organizations have called for an independent probe and condemned authorities on both sides of the border for excessive use of force. Spanish prosecutors also launched an investigation.

The report said 2,000 migrants attempted a massive crossing to Melilla, mainly via the BarrioChino crossing area. It described the attempt as abrupt, well-organized and unusually massive, and took place in broad daylight in a concentrated area at the crossing station instead of all along the fence as in the past.

When they reached the crossing station, the migrants jostled in a very narrow and tightly secured space. The turnstile gates remained firmly closed, “probably contributing to the high death toll and number of injuries,” the report said.

It said the mission gathered from authorities, NGOs, and injured migrants at the hospital that Moroccan law enforcement officers did not use lethal weapons but used tear gas and truncheons to block the storming. It said it saw videos showing Moroccan policemen poking migrants lying on the ground with batons, and was told by authorities they were “isolated and individual cases.” CNDH said these actions were “unjustified.”

Videos showing Black men lying on the ground that day, some motionless and bleeding as Moroccan officers stood over them, sparked public outrage and condemnation from the United Nations chief. Other images showed groups of men climbing a fence while hurling rocks at Moroccan anti-riot police and then collapsing on the ground.

The CNDH concluded that asphyxia was the main cause in the deaths. However, the report said that “only an autopsy can accurately determine the exact individual causes of death.” The report said the bodies of the deceased remain in the morgue awaiting autopsies and DNA testing.

The fact-finding mission said a large number of Sudanese migrants started entering Moroccoin early 2021, which it described as a significant change in migrant communities in Nador.

Omar Naji, from the non-governmental human rights watchdog AMDH in Nador, described the report as “inaccurate and incomplete,” saying that it “reflects the official viewpoint of a complex problem."

He told The Associated Press that the report cannot be a substitute for the AMDH’s demand for an independent investigation, adding that the group will soon release its own report “in order to show the truth.”

The European Commission last week vowed to step up its work with Morocco to fight human smugglers who are using “new, extremely violent methods."