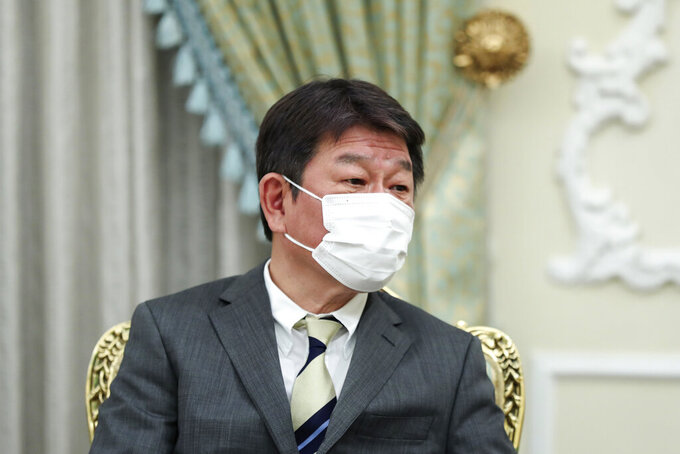 Uncredited, ASSOCIATED PRESS
In this photo released by the official website of the office of the Iranian Presidency, Japanese Foreign Minister Toshimitsu Motegi listens to Iranian President Ebrahim Raisi during their meeting at the presidency office, in Tehran, Iran, Sunday, Aug. 22, 2021. (Iranian Presidency Office via AP)

TEHRAN, Iran (AP) — Iranian president met Sunday with Japan's foreign minister in the capital of Tehran and the two discussed de-escalation of tensions in the region, Iranian news agencies reported.

The two-day visit is the first by a Japanese official since Raisi became Iran’s new president and the first since the Japanese prime minister visited Iran in 2019. ISNA said Motegi is in Tehran at the official invitation of Iranian Foreign Minister Mohammad Javad Zarif.

The report said Motegi would meet with other Iranian officials, including Raisi's nominated foreign minister, Hossein Amirabdollahian and other high-ranking officials during his two-day visit.

Raisi said he is opposed to the creation of insecurity in the region, adding: “The presence of Americans in the region, including Afghanistan, has not provided security.”

Motegi said Tokyo also supports diplomatic efforts by regional countries to achieve peace and stability in the region. He said Japan believes problems should be resolved peacefully and through dialogue.

Earlier on Sunday, Motegi met with Zarif and the two also discussed de-escalation of tensions in the region.

In 2019, former Japanese Prime Minister Shinzo Abe visited Iran’s top leader Ayatollah Ali Khamenei as an interlocutor for former U.S. President Donald Trump, hoping to ease tensions between Washington and Tehran. But Khamenei did not consider Trump worthy of an exchange of messages.

Recently, Japan donated some 3 million doses of AstraZeneca vaccine to Iran, which has suffered the worst virus outbreak in the Middle East.