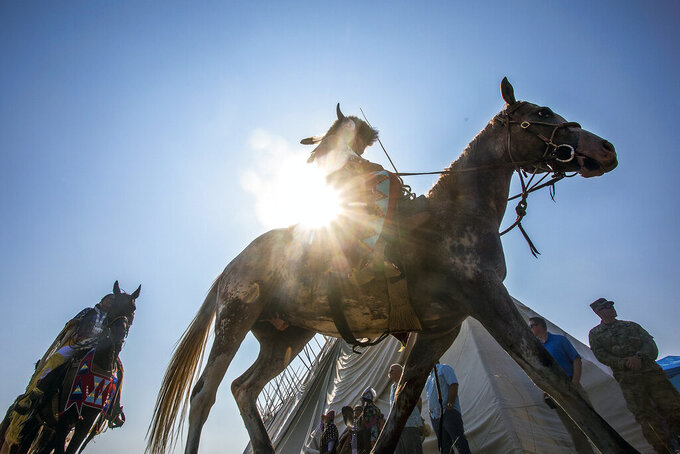 August Frank, ASSOCIATED PRESS
Horseback riders circle the longhouse prior to the Nez Perce Tribe Land Blessing in Joseph, Ore. on Thursday, July 29, 2021. A special ceremony will occur in Idaho on Saturday to rename a historic collection of artifacts owned by the Nez Perce Tribe. (August Frank/Lewiston Tribune via AP)

Their pace — slow and steady — quickened without warning. Soon the two men, one shirtless and the other wearing a beaded vest, raced across the grassy slope.

"There they go, look at them. They get to do that now,” said Ellenwood as he fanned himself with an eagle wing. “Can you imagine how a whole camp was here and boys and young men and young ladies would ride their horses all around. It was like that all day, every day.”

As he spoke, other Nimiipuu people sang, danced and drummed in a longhouse, celebrating and blessing the 148-acre property the tribe purchased last December.

“The people are excited to come back home,” said Casey Mitchell, a member of the tribe’s executive committee. “When we sing our songs and we dance, we are letting our ancestors know we are back and that our love for this land will never die.”

Known as Am’sáaxpa, or place of the boulders, the land is a traditional campsite and one of the last places occupied by Chief Joseph and his band before they left the Wallowa Valley and their northeastern Oregon homeland under threat of military force in the spring of 1877.

The Army was forcing them to live in Idaho and within the boundaries of a reservation defined by the 1863 Treaty. At just 770,000 acres, it was a fraction of the territory they were promised in the Treaty of 1855 and smaller yet than the tribe’s 17 million acre traditional homeland.

Tribal Chairman Samuel Penney said to this day Nez Perce people call it the “Steal Treaty” because few of the tribe’s bands signed on to the rushed agreement precipitated by pressure from settlers and the discovery of gold near Pierce. But in the government’s eyes, the treaty was valid and Nez Perce from places like the Wallowas, the Salmon River, White Bird and the Palouse were forced to relocate.

Later that summer, friction over the treaty and the forced exile led to war. A faction of the tribe engaged with the army in a series of battles that stretched nearly 1,200 miles across Idaho and Montana. Chief Joseph eventually surrendered in the Bear Paw Mountains. He and many of his people were never allowed to return to the Wallowa Valley.

Despite the official exile, other Nez Perce people have been coming to the valley for more than a century to practice their religion, visit grave sites, hunt, fish, dig roots and pick berries. For decades they have participated in the Chief Joseph Days Rodeo that is being held this week. But the purchase gives them a place to stay, to be more than visitors in their own homeland.

“We are resilient people. We were forced out of here, but now look, we’ve come back,” said Ellenwood, also a member of the tribe’s executive committee. “We never really left but now it’s in black and white. It’s ours.”

A few hours earlier, tribal leaders on horseback headed a procession of riders and walkers from Joseph High School west along Wallowa Avenue, following the tribe’s traditional Imnaha Route to the property. Some wore traditional dress while others stuck with modern outfits. Among the crowd were elders, toddlers and every age between.

“I think it’s realy cool seeing all of us come together and being able to walk on our homelands and take back our culture,” said Gabby Lewis, 23, of Spokane.

The short, 1-mile ride and walk was a symbolic nod to the heartbreaking trip Joseph and his people made as they left the scenic valley framed by towering peaks.

“There was a point where our elders turned back and thought they would never come back to this place and many never did,” said Nakia Williamson, director of the tribe’s cultural resource program. “As our people left on horses, we wanted to return on horseback.”

It was also a day for healing. Some of the differences and rifts — brought on by those who signed onto the 1863 Treaty and those who didn’t, those who practice traditional religion and those who follow Chrstianity — have persisted. The nontreaty Nez Perce were sent to Oklahoma and later to the Colville Reservation in northeastern Washington.

“Our people are buried in different areas, but this is where they are from,” said Jewie Davis, a Nez Perce man who lives at Nespelem on the Colville Reservation. “Those of us descended from Nespelem and those from Lapwai and those from Pendleton — there needs to come a time and a day when there is healing between all of us.”

Shannon Wheeler, vice chairman and a descendant of Chief Joseph’s sister, said the Place of the Boulders belongs to everyone.

“We are all the same people. We are no different,” he said. “We can point to the things that separated our people. That is behind us.

It’s also a chance to strengthen relationships with the land that Williamson said are central to the Nez Perce. The land is more than just crops it can grow or animals it can support.

“The land and us is the same,” he said. “What you call resources is a part of our life, and so when we advocate for these resources we not only advocate for our life but all of humanity, all of you and for us to continue this life that has been carried on for thousands of years, thousands of generations.”