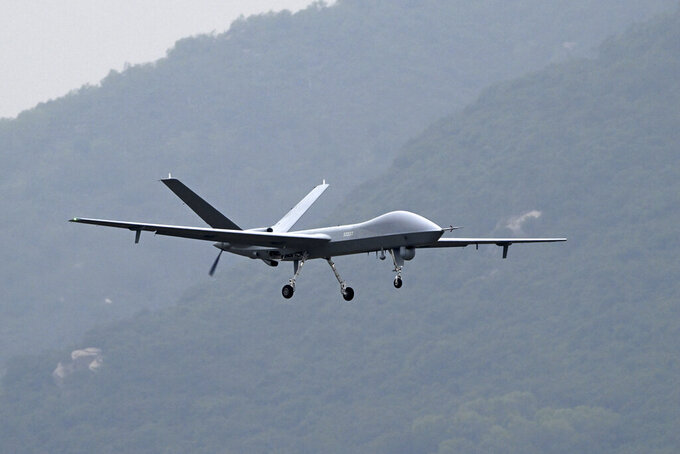 Yu Hongchun, ASSOCIATED PRESS
In this photo released by Xinhua News Agency, an Attack-2 drone flies during a training for the upcoming 14th China International Aviation and Aerospace Exhibition in Zhuhai in southern China's Guangdong province on Nov. 5, 2022. China is displaying its latest generation fighter jets and civilian aircraft this week as it looks to carve a larger role for itself in the global arms trade and compete with Boeing and Airbus. (Yu Hongchun/Xinhua via AP)

BEIJING (AP) — China is displaying its latest generation fighter jets and civilian aircraft this week as it looks to carve a larger role for itself in the global arms trade and compete with Boeing and Airbus.

China is currently the world’s fourth-largest arms exporter and an expanding domestic industry has allowed itself to cut off former dependence on Russia. With heavy state backing, it now competes to sell drones, warplanes and missile defense systems, as well as its staple Cold War-era ground weapons and ammunition.

The air show in the southern city of Zhuhai comes as Russia’s war on Ukraine has reduced stocks to the point that the United States has accused North Korea of supplying Soviet-era ammunition such as artillery shells to replenish Russian stockpiles.

Between 2017 and 2021, China made up 4.6% of total global arms exports, placing it fourth behind the U.S., Russia and France, according to the Stockholm International Peace Research Institute. The bulk of its exports went to Pakistan, a long-time ally that shares a mutual rival in the other regional giant, India.

On the civilian side, state airplane maker The Commercial Aircraft Corporation of China plans 15-minute display flights of its C919 jet that it hopes will compete with Boeing's 737 and the Airbus A320. The project is long overdue and reportedly over budget, while a drastic reduction in air travel due to China's strict anti-COVID-19 policies have delayed plans for domestic carriers to add the planes to their fleets.