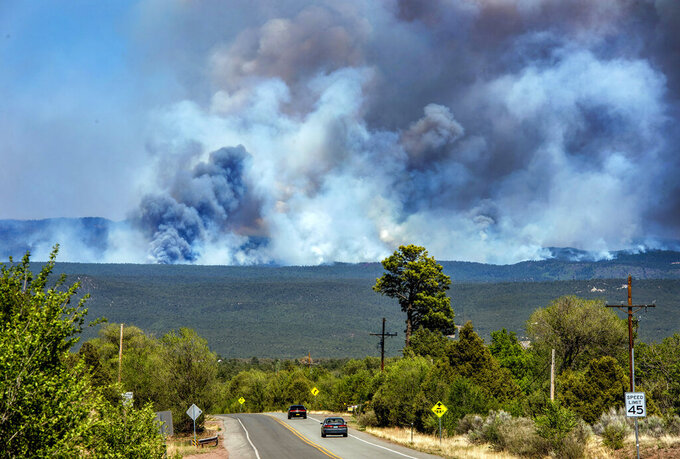 Eddie Moore, ASSOCIATED PRESS
FILE - The Calf Canyon/Hermit Peak Fire burns in the mountains near Pecos, N.M., on Thursday May 25, 2022. The supervisor who was in charge of the Santa Fe National Forest when the federal government sparked what became the largest wildfire in New Mexico's recorded history has been temporarily assigned to a post in Washington, D.C. Her replacement was named Friday, July 8, but some have questioned the timing given an ongoing suppression effort that now totals about $275 million. (Eddie Moore/The Albuquerque Journal via AP, File)

ALBUQUERQUE, N.M. (AP) — Commissioners in a northern New Mexico county urged U.S. forest managers on Tuesday to do a more comprehensive environmental review of plans to restore large swaths of forest that border the capital city, passing a resolution fueled by frustrations that have been mounting in the wake of a devastating wildfire sparked by the government's planned burns.

The Santa Fe County Commission unanimously approved the resolution, but not before some of the elected officials and members of the public blasted the U.S. Forest Service for not taking into consideration the exceptionally dry conditions that have plagued many parts of the West for the last two decades.

Numerous missteps by the agency resulted in prescribed fires erupting this spring into the largest wildfire in New Mexico’s recorded history. The blaze has yet to be fully contained after more than three months, and firefighters most recently have been focused on reseeding some of the blackened areas and trying to mitigate post-fire flooding.

Santa Fe resident Valerie Gremillion told the county commissioners that she has been reviewing the report that outlines mistakes made by the agency, including its failure to use updated fuel models, to take into account the extreme drought conditions or to follow through with other protocols.

“I would not let them run a carnival in my backyard, much less set a fire to the back of the Santa Fe National Forest,” she said.

U.S. Forest Service Chief Randy Moore in a statement released along with the report acknowledged the heartbreak among New Mexico families and communities. Several hundred homes were burned, thousands of people were forced to evacuate and farmers, ranchers and municipal officials are worried about the environmental and social consequences that will be felt over the coming decades.

“Fires are outpacing our models and, as the final report notes, we need to better understand how megadrought and climate change are affecting our actions on the ground,” Moore wrote, adding that the agency must learn from the fire.

The resolution aims to push the agency further in that direction, specifically calling for forest officials to respond to “a full and fair discussion” of significant environmental impacts, examine alternatives that include preserving forests in their natural condition and document unavoidable adverse effects prior to starting any project aimed at clearing out overgrown and dead vegetation.

“I think it's very timely that we bring this forward and encourage the Forest Service to rethink its practices in a big way,” said Commissioner Hank Hughes.

Moore halted his agency's prescribed burn operations pending a formal review, but Commissioner Anna Hansen, who introduced the resolution, said prescribed burns should be ceased until federal officials address the concerns of both community members and independent scientists.