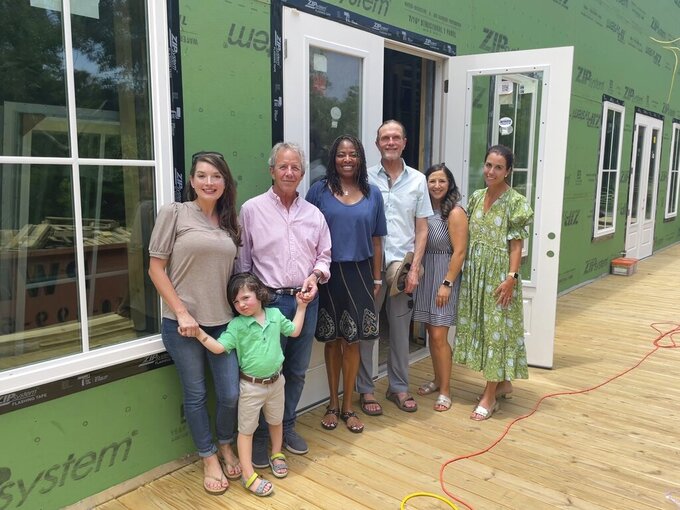 Home to over 10,000 acres of preserved land, encompassing marshes, beaches and maritime forests, the island is an ecological paradise for its roughly 260 permanent residents.

Accessible only by boat, the remote island is about to look a little more like the mainland.

Bald Head Island Academy, the island’s first school, will be opening at the end of August. A private K-8 school for residents and the children of those who work on the island, the academy’s founders are optimistic that it will make life on the island easier for those with young children.

Millicent O’Connor has been living on Bald Head Island for three years. She works as a real estate agent for Pirate Places, LLC., a rental company she owns with her husband, Robert, that provides housing near East Carolina University.

A mother of two young children, O’Connor said she’s long hoped a school would open on the island.

To get her children to preschool in Southport twice a week, O’Connor currently takes the ferry, a commute she said is challenging. Each day of school requires at least two ferry trips.

“It’s very tough. That’s one thing we were really dreading, if they were going to have to go to school because especially with young children it’s really difficult for them to behave on the ferry,” she said.

O’Connor is happy that her children can finally stay in the community for their education, and will be able to spend most of their time on the island. Her 5-year-old daughter will be starting kindergarten at Bald Head Island Academy this fall.

Co-founder of the academy, Sheree Vaickus, knows getting children to school every day is difficult for islanders.

When Sheree Vaickus pitched the idea for the school to now-head teacher Sarah Tennant, they were excited to explore how Bald Head Island Academy could be different from a traditional public school.

After working as an educator for over a decade, Tennant believes the academy can have a positive impact on the education system.

Originally from West Virginia, Tennant worked in Ohio before moving to Raleigh, where she met Vaickus, who also serves as the academy’s curriculum operations solutions and marketing officer. Prior to her work with the academy, she was chief operating officer of akta Pharmaceutical Development, which was founded by her husband, Dr. Louis Vaickus.

Tennant said the academy will be a “student-centered school” and that small class sizes made up of multiple grade levels will allow teachers to spend more time working individually with students.

Tennant currently resides at the academy’s “teacher headquarters,” a recently renovated home in Southport, where teachers are housed free of charge.

Bald Head Island Academy’s director of life sciences curriculum, Dr. Louis Vaickus, said the academy has heard from families in Southport interested in enrolling their children. For the time being, the board has decided to only accept students who live on the island or are the children of those who work there.

Louis Vaickus also volunteers as chairman of Bald Head Island Academy’s board. Founder and CEO of akta Pharmaceutical Development, he is a researcher, doctor and immunologist. He expects to continue to be involved in his company moving forward.

He hopes that the academy’s individualized approach to learning will allow kids to realize what they gravitate toward at a young age, setting them up for success on a future career path.

From idea to school

About seven months ago, Sheree Vaickus began planning to start Bald Head Island Academy, quickly discovering that building a school on the island would be no easy task.

Originally, there was no land on the island zoned for a school. In late June, the Village of Bald Head Island changed its zoning laws to allow schools on land that is zoned as commercial property.

Complying with building codes set by the North Carolina Department of Public Instruction was another challenge.

The Department of Public Instruction requires kindergarten and first grade classrooms to be located on the first floor of a school.

On Bald Head Island, where flooding can happen, structures have to be raised. Vaickus said that it took some back and forth with the Department of Public Institution to explain the issue, but that the current building was ultimately approved.

The academy had to wait for the village to change the zoning laws before it could enroll students, so Vaickus is unsure how many students are currently enrolled. She said many families have expressed interest.

Her daughter, who is starting sixth grade this fall, will be attending the academy.

Learning from the island

On the ride from town to the ferry terminal, no less than three butterflies floated across the road in front of Sheree Vaickus’ golf cart.

A sight like this might be unusual to some, but frequent visits from local wildlife are part of everyday life for those who call Bald Head Island home. Lou Vaickus recently saw a 7-foot-long snake climb up the railing on the family’s porch.

Such encounters with nature are part of what school founders are aiming to incorporate into the academy’s curriculum.

Dr. Sabina Bragg, who is developing the curriculum for the academy’s summer enrichment program, holds a doctorate in educational psychology from the City University of New York Graduate Center.

Spending most of the year at her primary residence in Charlotte, Bragg loves watching her three children learn from the nature each summer during the family’s annual trip to their second home on Bald Head.

On a recent biking trip, Bragg and her daughter found a bird that had fallen out of its nest. After a quick phone call, nature conservancy members were there helping the bird and explaining the situation to her daughter.

For the summer program, Bragg is aiming to integrate hands-on activities like this with a rigorous metrics-based academic curriculum. Her goal is for children to experience the island, while having measured academic growth.

Mayor of the Village of Bald Head Island, Peter Quinn, is optimistic that the addition of a school will draw more families to the island. He said the school will help answer the questions of many vacationers wondering how they can live on the island full-time.

Quinn said that despite the island’s 400-year history, the community is just getting started. In 1985, a municipality was formed with the establishment of the Village of Bald Head Island.

He said that he knew the island would eventually need a school, and is supportive of community members’ push to build one.

“I can’t imagine a community without a school. For a community to keep on developing and investing in themselves, you need education,” he said

O’Connor, who is also the director of the academy’s parent teacher organization, said she’s noticed great interest from the community in volunteering at the school.

Sheree Vaickus also hopes the school will change the demographic of the island, shifting it from a seasonal vacation destination to a place where young families can easily raise kids. She said it’s possible for anyone to move to Bald Head Island, and that it is a community, not a place of elites.

Still, if an equitable experience for students is the goal, why not start a public school?

Quinn said that the island’s tax base most likely wouldn’t support a public school. According to data from the U.S. Census, 76.6% of the island’s inhabitants are estimated to be age 65 or older.

Bald Head Island Academy has a uniform policy, which Sheree Vaickus said was designed to level the playing field for students.

Through the school’s philanthropic efforts, the academy is working to welcome students from various socio-economic backgrounds, encouraging a diverse learning environment.

Vaickus said the school’s nonprofit fundraising arm, the Bald Head Island Academy Foundation, recently obtained 501(c)(3) status, so donors are eligible to receive tax benefits. She added that the Foundation is important for all students, even those whose families are currently able to afford tuition.

Through the Foundation, the school plans to provide scholarships to those with financial need. According to the academy’s website, tuition for one year is $11,600.

Future of the academy

The academy is being built in two phases. Phase 1, which is currently in construction, is a new commercial property located at 2 Maritime Way where the academy will lease space.

The academy is exploring plans for phase 2, which would be to build a school on what is now a vacant lot adjoining the property where the academy is leasing space.

The academy will be accredited through its partner institution, Charlotte Lab School. For legal reasons, Vaickus couldn’t comment on the partnership.

Vaickus said construction is on track for Bald Head Island Academy to welcome students on Aug. 29, the first day of school.