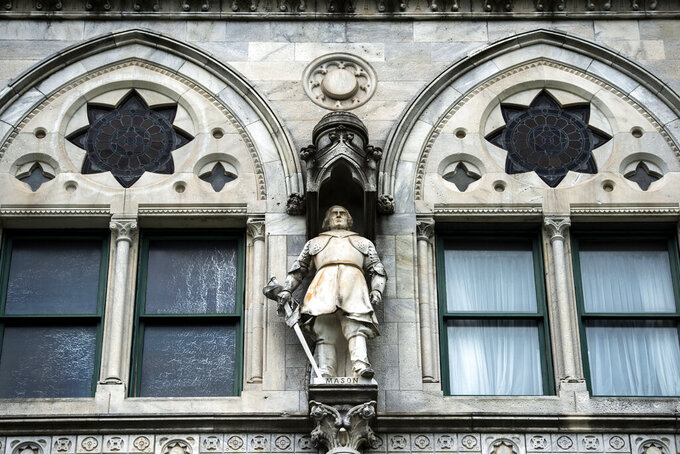 HARTFORD, Conn. (AP) — The idea of relocating a 1.5-ton (1,500 kg) statue of Capt. John Mason, located on the Connecticut State Capitol building, sparked strong opinions Thursday, with tribal leaders saying it's an affront to still have a marble figure of the man who led the 1637 massacre of the Pequot Tribe.

“Our people are ready for this healing. We have open wounds,” Marjorie Colebut Jackson, chair of the Mashantucket Pequot Elders Council, told the Connecticut State Capitol Preservation and Restoration Commission, which held an informational forum on the issue.

But State Historian Walter Woodward warned “historical amnesia” might be “the ultimate byproduct of the statue’s removal," urging the state to instead add statues of Native Americans and historical information for visitors. And Marcus Mason Maronn, an Old Lyme resident who said he's a descendant of Mason, argued the “sensitivities of a small minority of unhappy people in no way shape or form” warrants the statue's removal, calling it “a frivolous waste of time.”

It's unclear what will happen to the statue, located in one of 26 niches which ring the Capitol building. The little-known preservation commission, which was not originally consulted about a provision tucked into the state budget to remove the statue, is expected to make a recommendation next month to the Office of Legislative Management. The office oversees the state Capitol complex. It may ultimately be up to legislative leaders to decide what happens afterward.

Mason is known for leading the raid on a settlement of Pequot Indians, which historians said killed more than 400 men, women and children in an hour. There have been efforts to remove his likeness elsewhere in Connecticut in recent years, including a 2-ton statue in Windsor that was first erected in 1889 in Groton but eventually relocated to Windsor in 1996. A member of the Pequot tribe had campaigned to have it removed from Groton because he said it glorified the killing of his ancestors.

The massacre should shock everyone, Woodward said, noting that Mason's acts “represented an extreme departure from the norms of indigenous warfare." But he said the story is more complicated, noting the aggression of the Pequots as well as the actions of other tribes that received hundreds of Pequot captives in servitude and who supported the Treaty of Hartford, which divided up Pequot territory.

“The realities of the Pequot War and its aftermath are difficult, they're complex and they're often untold,” he said.

Daniel Menihan Jr., a member of the Mashantucket Tribal Council, said giving the statue such a place of honor makes it appear to be like a trophy to the winners of the war. He said the tribe doesn't want to rewrite history, but rather wants the statue moved somewhere so people can learn the “whole story” of what happened.

“It's been there for a very long time and it hasn't educated many people at all,” he said.