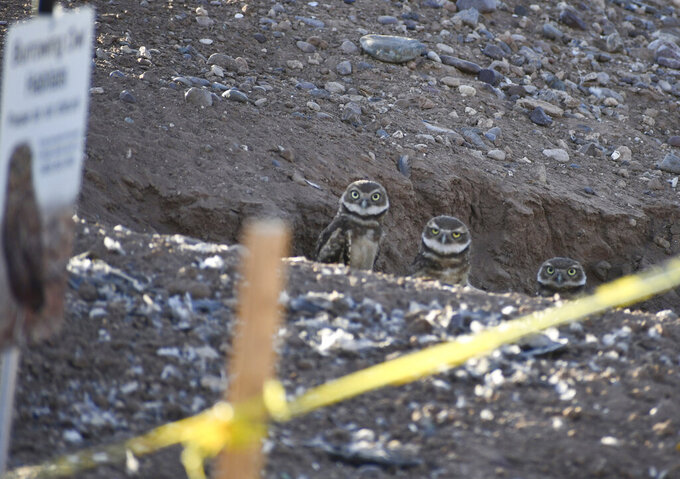 Jodie Newell, ASSOCIATED PRESS
A colony of burrowing owls stand in their habitat across the street from a high school in Casa Grande, Ariz., on Friday, June 10, 2022. Quick thinking by Nancy Wood saved several colonies of burrowing owls from being entombed as vehicles were parked near habitats on the day of a school graduation ceremony. (Jodie Newell/Casa Grande Dispatch/PinalCentral.com via AP)

CASA GRANDE, Ariz. (AP) — Call it a “hoot” done it. Quick thinking by a Casa Grande woman saved several colonies of burrowing owls from being entombed as vehicles were parked near habitats across the street from Vista Grande High School during the recent graduation ceremony.

Nancy Wood contacted attending police officers, who were able to divert and inform people of the owls’ presence.

PinalCentral.com reported that one burrow was slightly damaged, but the owls were kept safe as Wood erected safety barriers with accompanying signs letting the public know of the presence of the hardy birds.

“I had just been driving by because I go out and check on the owls occasionally during the week and see what’s happening,” she said. “I saw what was happening. It was like, ‘Oh, my gosh, they’re going to drive over the burrows or walk over the burrows and then the owls will be trapped in their holes.’”

A resident of the Casa Grande area for three years, Wood is actively involved in keeping an eye on local bird life and has gone before the city’s Planning and Zoning Commission advocating and raising awareness for the burrowing owls, whose habitat has come under pressure from new development projects.

The western burrowing owl is protected under the Federal Migratory Bird Treaty Act of 1918. All migratory birds and their parts are fully protected. The owls are also protected under Arizona state law.

The birds can harbor several inhabitants in a burrow.

“Most people think birds live in nests and trees and stuff like that but the burrowing owls are the only owl that actually lives in the ground,” Wood said. “They nest in the ground, they have their offspring in the ground, their babies are raised in the ground. At this time of year, it’s nesting season so one burrow can have eight owls that would be compromised if something happens to the burrow.

“We have a lot of them that are in the area, which is surprising because they live in the burrows in the ground so you just drive by a hole and you don’t even see them until they happen to show up and pop out and sit on a branch. A lot of times you don’t know that they’re even there.”

Wood said that while she isn’t against development or new housing projects for the Casa Grande area, she hopes that by creating awareness of the owls and their habitats, developers can help provide solutions to problems that arise.

She hopes builders become educated in how to spot a burrow, and who to contact at a rescue so they can be safely handled.

“I don’t have any problems with their development,” Wood said. “It’s their land and we need the development for the city. People need places to live. It’s just that we don’t want to take the owls’ homes away from them and have no place to go. Eventually even the city or the developers might say set aside some habitat that would allow them to stay. Otherwise if they just get relocated, we’ll end up with no owls.”