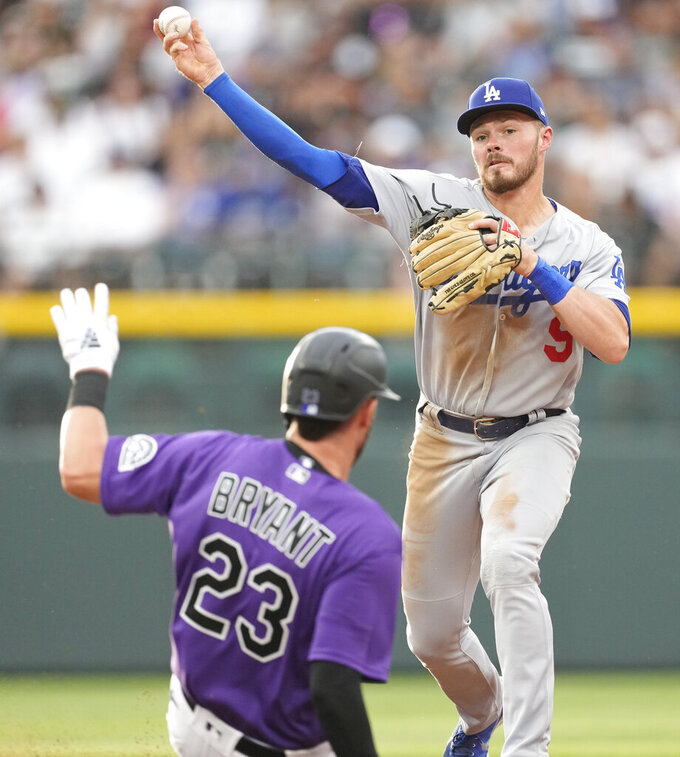 DENVER (AP) — Chad Kuhl crouched in a tunnel at Coors Field, sharing the moment with his parents on a FaceTime call as his phone kept buzzing with other messages of congratulations.

The fact that the best start of his career came against the powerful Los Angeles Dodgers only made the night even more special.

Kuhl pitched a three-hitter for his first major league shutout and the Colorado Rockies beat Los Angeles 4-0 on Monday.

“We all want to win, but it’s just been one of those personal goals for me,” Kuhl said. “And not just a complete game, but just going long time in, time out.”

José Iglesias hit a two-run homer and the Rockies handed Tyler Anderson (8-1) his first loss in 12 starts and two relief appearances this season. Kris Bryant went 1 for 4 in his return to the lineup after missing more than a month with a lower back strain.

Kuhl (5-5) was sharp after giving up 11 runs over 14 1/3 innings in his previous three starts. He struck out five and didn’t walk a batter in the longest outing of his career.

His previous best was 7 1/3 innings against Cincinnati on April 30.

“It was amazing,” Iglesias said. “Him and (catcher Elías) Díaz were connected. He threw the ball really well against a good lineup.”

Kuhl allowed just two singles through eight innings — and one was erased on a double play. Gavin Lux led off the ninth with a double but was stranded at second.

“It’s finally the time to celebrate the accomplishment,” he said.

It was the 27th individual shutout in the history of hitter-friendly Coors Field.

“You don’t see that every game,” Colorado manager Bud Black said. “It doesn’t happen. So, impressive.”

Bryant, who hadn’t played since May 22, finished with a single in four at-bats. He flied out to the warning track in right field his first time to the plate and singled his next time up.

The Rockies scored in the first on C.J. Cron’s RBI single and added another run in the second on a single by Díaz.

Iglesias doubled the lead with his first home run of the season in the sixth.

Dodgers: Manager Dave Roberts said OF/INF Zach McKinstry (stiff neck) will likely remain out for a little while. “I talked with him earlier today and he still didn’t have much range of motion,” Roberts said. “We’ll probably give it another couple of days.” ... OF Mookie Betts (right rib fracture) has not begun baseball activities yet.

Rockies: Activated LHP Ty Blach from the 15-day injured list and placed INF/OF Sean Bouchard on the 10-day IL with an oblique strain.

Roberts was picked to be a coach for NL All-Star manager Brian Snitker of the Atlanta Braves at next month’s showcase in Los Angeles. Roberts, the NL manager for the past three All-Star Games, is excited about the role.

“There’s no stress. I’m looking forward to it. Even if we don’t win the game, National League, it’s not on my shoulders,” he said. “I’m 0-3. I think it’s just basically you can be a fan. You have the opportunity to be around the game’s best and watch the game’s best perform. So it’s something I don’t take for granted and I’m going to enjoy it as a coach and as a fan.”

A cheer went up through the crowd of 38,706 at Coors Field when the big screen showed pictures of Colorado Avalanche players skating with the Stanley Cup on Sunday night in Tampa, Fla.

Colorado beat the Lightning 2-1 in Game 6 to capture the third Stanley Cup title in franchise history and the first since 2001.