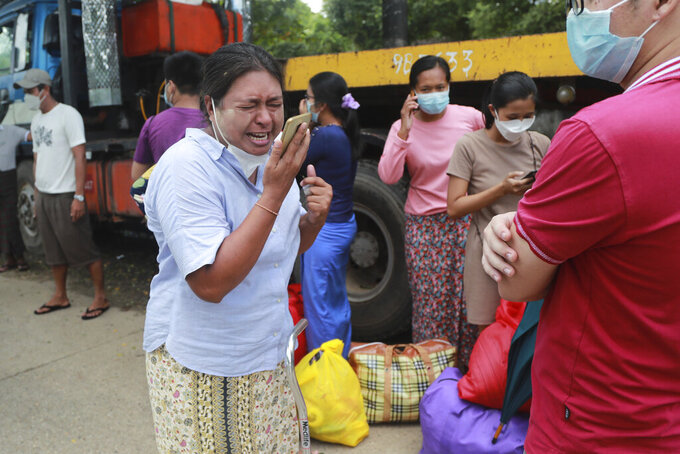 Uncredited, ASSOCIATED PRESS
A woman talks to her family members on a phone after she was released from the Insein Prison Tuesday, Oct. 19, 2021, in Yangon, Myanmar. Myanmar's government on Monday announced an amnesty for thousands of prisoners arrested for taking part in anti-government activities following February's seizure of power by the military. (AP Photo)

BANGKOK (AP) — Crowds gathered Tuesday outside prisons around Myanmar, waiting for at least a glimpse of friends and relatives who were being freed under an amnesty for people arrested for protesting against military rule.

The head of the army-installed government, Senior Gen. Min Aung Hlaing, announced the amnesty covering more than 5,600 people on Monday. State television said it included 1,316 convicts who would be freed from prisons around the country and 4,320 others pending trial whose charges would be suspended.

The announcement came three days after the Association of Southeast Asian Nations delivered a rare snub by declining to invite Min Aung Hlaing to an upcoming summit, even though Myanmar is part of the 10-member bloc.

The move reflected ASEAN’s frustration with the continued stalling of a visit to the country by its special envoy, who was appointed as part of an initiative to find a way out of the violent crisis that has gripped Myanmar since the army overthrew Aung San Suu Kyi’s elected government in February.

The government had refused to grant the request of the special envoy, Brunei Second Foreign Minister Erywan Yusof, to meet with Suu Kyi. She has been detained since the military takeover and is being tried on several charges that her supporters say are politically motivated.

At Insein Prison in Yangon, which for decades has served as the main place of detention for political prisoners, a stream of buses carrying released detainees exited the gates and pushed slowly through a jubilant crowd. Some shouted with delight and handed roses through the vehicles’ open windows.

Family members hugged and wept as they were reunited after months of uncertainty for some, with the prisoners’ isolation heightened by lockdown measures meant to help contain the coronavirus pandemic.

One released detainee, who declined to identify herself to avoid drawing the authorities’ attention, was crying as she stood outside the prison walls and spoke to her daughter on a mobile telephone.

“Your mother is free from the suffering,” she said, blinking away tears. “Please come and wait for me downstairs, my daughter. I am free.”

There were similar scenes on Monday night when the first of the releases began.

However, 11 of 38 people who were released Monday night from Meiktila Prison is central Myanmar were rearrested at the prison gate, said a person close to the family of a prisoner there. Those rearrested included officials and members of Suu Kyi's National League for Democracy party as well as street protesters, said the man, who spoke on condition of anonymity because he feared the authorities would punish him for talking to the media.

He said all were charged under the Counter-Terrorism Law, though more details were not immediately available. The law punishes acts of violence and also “acts of exhortation, persuasion, propaganda and recruitment of any person to participate in any terrorist group or activities of terrorism.” Leading groups opposed to military rule, including the underground National Unity Government, which considers itself the country's legitimate administration, have officially been designated terrorist groups.

Phone calls to an official from the Prisons Department seeking comment went unanswered.

Min Aung Hlaing tied the timing of the amnesty to the upcoming traditional Thadingyut festival of lights, suggesting that it could help restore peace and stability. But it was seen by many people as a goodwill gesture meant to offset the unpleasant publicity from being chastised by fellow ASEAN members.

Min Aung Hlaing’s government is already a pariah to many Western nations, which condemn it not only for overthrowing Suu Kyi’s democratically elected government but also for using deadly force to suppress protests against its rule.

A detailed accounting by the Assistance Association for Political Prisoners blames security forces for the killings of almost 1,200 civilians. The government now faces a growing insurgency in many parts of the country.

The United Nations special rapporteur on the situation of human rights in Myanmar, Tom Andrews, welcomed the prisoners’ release but said on Twitter that it came “not because of a change of heart, but because of pressure.” He added that they had been detained “illegally for exercising their fundamental human rights.”

The Assistance Association for Political Prisoners says at least 9,043 people have been arrested since the takeover, and 7,355 were in detention when the amnesty was announced.

Journalists, celebrities and internet influencers were among those benefiting from the amnesty, but important political prisoners such as Suu Kyi remain in detention. A Facebook group formed soon after the army takeover, Detained Journalists Information Myanmar, said it was aware of 15 journalists who were freed. About 100 have been arrested, though roughly half had been released before this week.