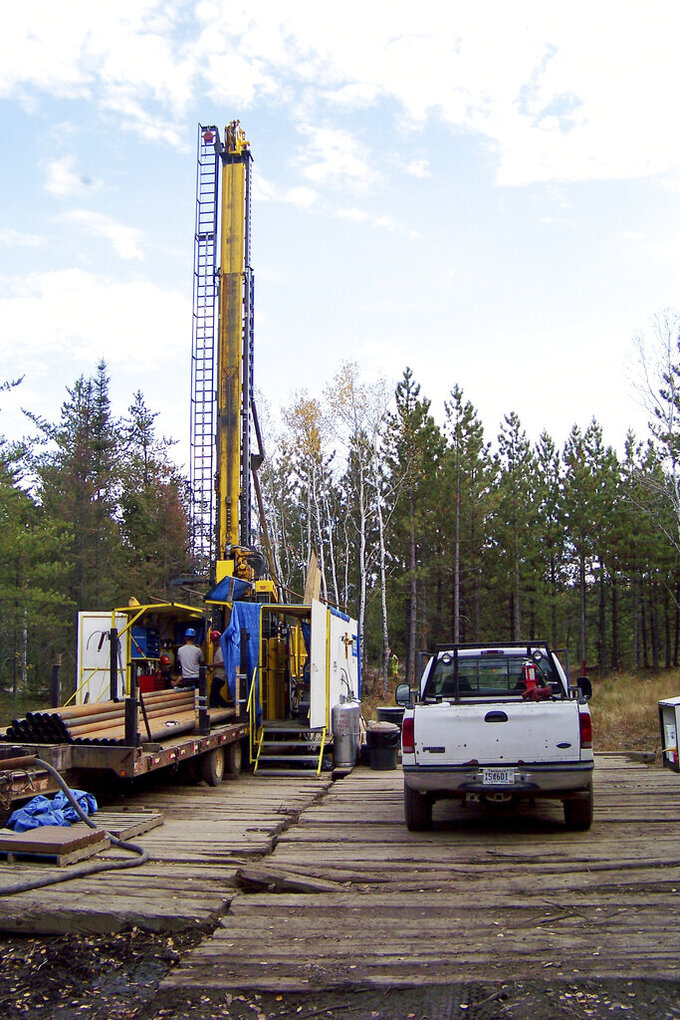 Steve Karnowski, ASSOCIATED PRESS
FILE - In this Oct. 4, 2011, file photo, a prospecting drill rig bores into the bedrock near Ely, Minn., in search of copper, nickel and precious metals that Twin Metals Minnesota LLC, hopes to mine near the Boundary Waters Canoe Area Wilderness in northeastern Minnesota. The Biden administration ordered a study Wednesday, Oct. 20, 2021, that could lead to a 20-year ban on mining upstream from the wilderness. (AP Photo/Steve Karnowski, File)

MINNEAPOLIS (AP) — Twin Metals will appeal a federal decision that dealt a serious blow to its proposed copper-nickel mine in northeastern Minnesota, the company said Wednesday.

Last week, the Biden administration ordered a mineral withdrawal study on 225,000 acres of federal land that could lead to a 20-year ban on mining upstream from the Boundary Waters Canoe Area Wilderness, a popular recreational area in the Superior National Forest.

The order, which was issued by the Forest Service and Bureau of Land Management, also prohibits issuing new prospecting permits or leases for mining-related activities in that area. The agencies said it does not affect valid existing rights or activities on private lands, including Twin Metals’ leases in the area, although they are currently the subject of a federal court challenge.

“We remain steadfast in our commitment to the communities of northeast Minnesota,” said Kelly Osborne, Twin Metals Chief Executive Officer. “We have a viable mining project that we will move forward under existing law.”

The rejection of the applications is both politically motivated and completely unnecessary, said Julie Padilla, Twin Metals Chief Regulatory Officer.

“This tells us that the federal government has no intention to listen to science, and it also makes clear that opponents of copper-nickel mining are afraid that the established environmental review process already underway for our project would show that a modern copper-nickel mine can be safe for the environment and should be permitted.”

When Twin Metals, which is owned by the Chilean mining giant Antofagasta, submitted its formal mine plan to federal and state regulators in 2019, the company said its design would prevent any acid drainage from the sulfide-bearing ore and protect the wilderness from pollution.

Environmental groups disputed that claim and challenged the lease renewals in court.