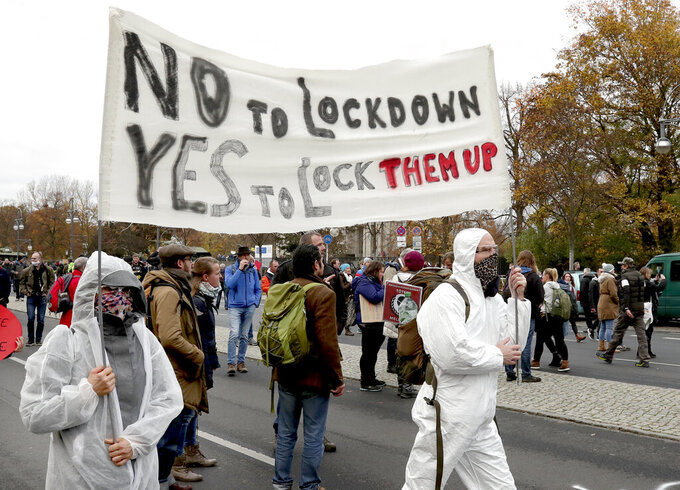 Michael Sohn, ASSOCIATED PRESS
FILE - People attend a protest rally in front of the Brandenburg Gate in Berlin, Germany, Wednesday, Nov. 18, 2020 against the coronavirus restrictions in Germany. The number of politically motivated crimes in Germany rose significantly last year to 55,048 offenses which is an increase by more than 23% compared to the year before, Germany's top security official said Tuesday. A significant proportion of these “more diverse and diffuse” offenses were committed in connection with the coronavirus restrictions and the 2021 federal election in Germany. (AP Photo/Michael Sohn, File)

The increase included a sharp rise in crimes that could not be assigned to the traditional categories of crimes motivated by right-wing or left-wing ideology, Interior Minister Nancy Faeser said.

A significant proportion of these “more diverse and diffuse” offenses were committed in connection with coronavirus restrictions and Germany's 2021 federal election, Faeser told reporters in Berlin.

Overall, Germany had 55,048 politically motivated crimes last year, the most since public agencies started tracking the data in 2001, the minister said.

“We must protect our democracy with all our strength,” Faeser said. “Politically motivated crime is an indicator of the intensity of social conflicts."

Antisemitic crimes rose 29% compared to the previous year, numbering 3,027, the minister said. Crimes against Jews are mostly committed by far-right extremists, but also by Islamist-influenced and left-wing extremists, she added.

“It is a disgrace for our country how much antisemitic agitation and contempt for humanity is still being spread today,” Faeser said. “We are aware of our responsibility to fight anti-Semitism with all our might and to protect Jews.”

The number of crimes attributed to the far left fell by around 8%, to 10,113 offenses.

The trend reflects “a polarization and radicalization tendencies in parts of the population, which pose a considerable challenge to social coexistence, the rule of law and a democracy,” he said.