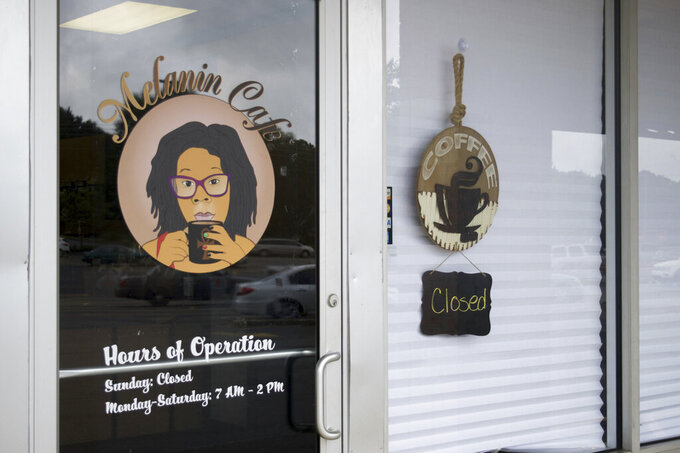 Abbey Crank, ASSOCIATED PRESS
Catrice and Jakyra Hixon, owners of Melanin Cafe in Opelika, Ala., strive to serve up great coffee and a peaceful environment. (Abbey Crank/Opelika-Auburn News via AP)

OPELIKA, Ala. (AP) — Catrice Hixon named her new Opelika coffee shop Melanin Café, and she wants people to understand the significance of it.

“Melanin is the pigmentation in everybody’s skin,” she said. “The difference with that is the amount of melanin. It’s something that makes us all the same but different at the same time.

“I want to celebrate the melanin that’s within all of us.”

The coffee shop is located at 1467 Fox Run Parkway and is open Monday through Saturday from 7 a.m. to 2 p.m.

Its entire purpose, according to Hixon, is to bring peace within the community.

“If we learn about each other, we can coexist with each other,” she said.

Hixon’s husband, Jakyra Hixon, may not be an avid coffee drinker, but he wanted to support Catrice every step of the way, so he went from being a Hyundai engineer to a coffee shop co-owner and full-time barista.

Instead of bearing the usual labels like plain caramel macchiato, every drink has a name associated with lesser-known Black contributors and landmarks.

“We learned about Black history in school, but we only got civil rights, Martin Luther King and Rosa Parks,” she said. “I wanted to bring forward people we don’t really know about, people like inventors, scientists and doctors.”

The café even features local Opelika history on its menu.

The coconut-vanilla flavored “Check-Up” represents Dr. John W. Darden, Opelika’s first Black doctor. His office became a local meeting hub for the community, and he treated patients throughout Lee County as well as inmates in the Lee County Jail.

For example, the green-based smoothie known as “Kowaliga” represents an entire community. At the bottom of Lake Martin lies Kowaliga, Ala., a town that had the first ever Black-owned railroad. It flooded when the construction of Martin Dam was complete and Lake Martin was formed.

“I just want to bring all of those people to the forefront so we know who they are and what they contributed to this country,” Hixon said. “It’ll inspire us to do things because representation matters. If we’re not seeing people that look like us do different things, we’re not really inspired.”

The Hixons also want Melanin Café to be a safe space for everyone to come together.

“I just want this place to be inviting and relaxing. I want people to come check out the vibes and atmosphere,” she said. “You don’t even have to order anything; just come in. All I want to be is a simple community with a sense of family.”

Hixon wants to hold book signings and poetry nights. As of now, nothing is set in stone, but future events are in the works.

On top of owning a coffee shop, Hixon is currently a PhD student in biology at Auburn University. When Melanin Café closes for the day, she heads to campus.

Her academic background has pushed her to find a way to create a coffee shop that educates others.

“Instead of sitting someone down in a classroom and telling them about Black history, I thought about doing it in a fun way,” she said.

When customers ask her about a drink’s meaning, she is able to give them the history behind the name. The result, she says, has been many positive conversations.

There is also a tab titled “Culture Corner” on Melanin Café’s website, where visitors can find the backstory of every drink in the shop.

“I just want this place to educate people, inspire people and bring everyone together,” Hixon said.