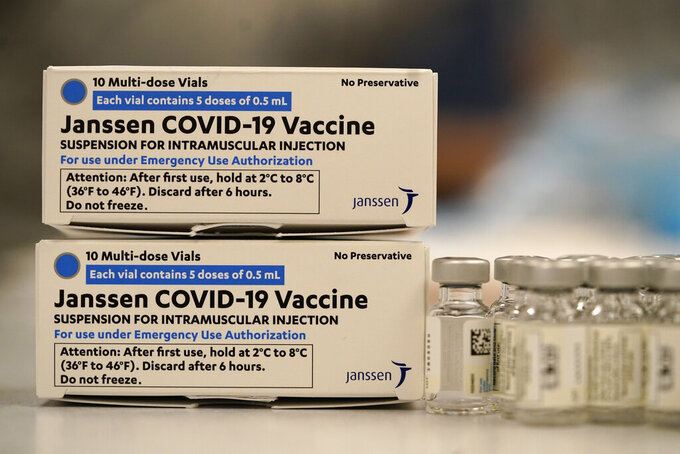 David Zalubowski, ASSOCIATED PRESS
FILE - Boxes containing the Johnson & Johnson COVID-19 vaccine sit next to vials in the pharmacy of National Jewish Hospital for distribution, in east Denver. A judge on Wednesday, Sept. 29, 2021, dismissed an attempt by a group of Denver police officers to block the city's vaccine mandate from taking effect. (AP Photo/David Zalubowski,File)

DENVER (AP) — A judge on Wednesday dismissed an attempt by a group of Denver police officers to block the city's vaccine mandate from taking effect.

In a lawsuit filed last week, seven officers claimed the city lacked the authority to impose the mandate under a local disaster emergency declared by Mayor Michael Hancock at the beginning of the pandemic. They noted Democratic Gov. Jared Polis rescinded his statewide emergency pandemic order in July.

The officers said the city should have instead followed the more drawn-out process laid out in state law to impose regulations.

However, Judge Shelley Gilman ruled that law applies only to state agencies. Under city law, the officers should have appealed the vaccine mandate, first issued on Aug. 2, to the health board before filing a lawsuit, she said.

Since they did not, Gilman said she had no jurisdiction to decide the case and dismissed it, granting a request made by the city in its response to the lawsuit filed Tuesday.

Lawyers for the city noted four of the seven officers who filed the lawsuit have been granted unspecified exemptions to the mandate and a fifth was denied an exemption for failing to cite an accepted reason.

They also listed recent unsuccessful attempts to block vaccine mandates in state and federal court by teachers in New York and health care workers in Kentucky and Texas.

The city claims people who are unvaccinated pose a threat to its ability to move past the pandemic.

Under Denver's public health order, updated Sept. 1, all city employees, workers in public and private schools, and people who work for private employers such as hospitals, homeless shelters and childcare centers must show proof that they are vaccinated by Thursday. City workers face dismissal for noncompliance.

Under a discipline plan released by the city attorney’s office, the city plans to start issuing letters Friday to unvaccinated employees who have not been granted exemptions notifying them that will face discipline.

Workers who refuse to get vaccinated under any circumstance will be dismissed. Others will be suspended for 10 days without pay and dismissed if they remain unvaccinated.

The city says 94% of city employees have complied with the mandate so far, but it comes as the police department struggles with a shortage of officers.

Police Chief Paul Pazen has acknowledged a higher number of resignations and retirements this year compared to previous years but told city councilors last week that the shortage was the result of the cancellation of police academy classes due to pandemic budget cuts.

As of Wednesday, 12 officers were expected to resign or retire from the 1,500-officer police department because of the vaccine mandate, said Andrea Webber, records administrator for the city's public safety department.