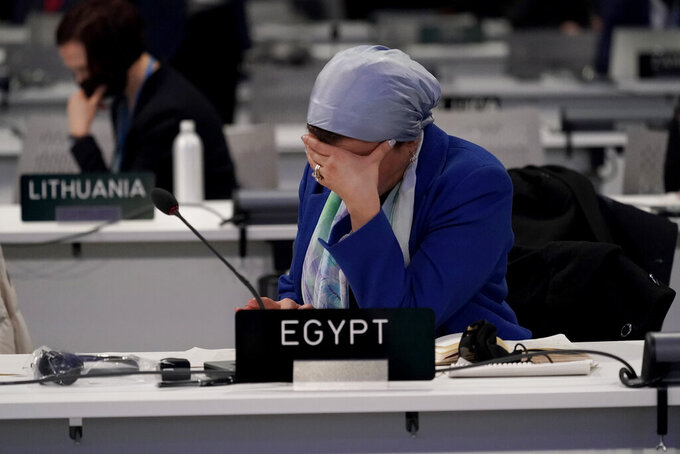 Alberto Pezzali, ASSOCIATED PRESS
Dr. Yasmine Fouad the Minister of Environment for Egypt who will host the next COP, COP27, attends a stocktaking plenary session at the COP26 U.N. Climate Summit, in Glasgow, Scotland, Saturday, Nov. 13, 2021. Going into overtime, negotiators at U.N. climate talks in Glasgow are still trying to find common ground on phasing out coal, when nations need to update their emission-cutting pledges and, especially, on money. (AP Photo/Alberto Pezzali)

GLASGOW, Scotland (AP) — The latest on the COP26 climate talks in Glasgow:

BRUSSELS — The head of the European Union’s executive arm says Saturday’s agreement at the U.N. climate conference “gives us confidence that we can provide a safe and prosperous space for humanity on this planet,” but warns that “there is still hard work ahead.”

Ursula von der Leyen is the president of the European Commission, and she says that “there will be no time to relax.”

Franz Timmermans adds that "it is a text which acknowledges the needs of developing countries for climate finance, and sets out a process to deliver on those needs.”

GLASGOW, Scotland — U.S. climate envoy John Kerry has expressed support for the draft climate agreement under consideration at the U.N. summit in Glasgow.

Kerry told conference participants on Saturday that while every country would be uncomfortable with some part of a possible deal, “we all know the adage of negotiations: you can’t let the perfect be the enemy of the good. And this is good. It is a powerful statement.”

He said climate change was an issue that allowed countries like the United States and China to rise above disagreements on other matters and come together for the common good.

GLASGOW, Scotland — India’s environment minister sought to block efforts to include references to phasing out coal and fossil fuel subsidies in a deal proposed at this year’s U.N. climate summit.

Bhupender Yadav told negotiators on Saturday that there was no consensus on key issues and blamed “unsustainable lifestyles and wasteful consumption patterns” in rich countries for causing global warming.

He said developing countries were “entitled to the responsible use of fossil fuels.”

European Union climate chief Frans Timmermans responded shortly after by warning that negotiators were “at risk of stumbling in this marathon a couple of meters before reaching the finish line.”

“For heaven’s sake, don’t kill this moment,” Timmermans said. “Please embrace this text so that we bring hope to the hearts of our children and grandchildren.”

GLASGOW, Scotland — Money is still the crucial point of disagreement between rich and poor nations and is delaying nations from a potential agreement at the U.N. climate summit, according to the Maldives’ minister for environment, climate change and technology.

Small island nations have long pushed for an independent compensation mechanism for irreversible losses caused by climate change. But the current proposal at the talks in Glasgow, Scotland, fall short of what is needed to bridge the gap between developed and developing worlds, Maldives minister Aminath Shauna said Saturday.

“I still have not found text and language that can bring both parties together on this issue.” she said.

The draft proposal published in the morning said participating nations had decided to “establish dialogue” on this issue of compensation for climate damages.

This is not enough urgency when hurricanes and floods are impacting essential services like drinking water in the Maldives, Shauna said.

But she also acknowledged that the mention was a slight win that took a lot of work for many years and therefore “we don’t want it to be removed entirely.”

GLASGOW, Scotland -- The British official chairing the U.N. climate talks in Glasgow, Scotland says negotiators have arrived at a “moment of truth” for their children, grandchildren and the planet.

Alok Sharma said talks late Friday and during the day Saturday had made progress.

He said that “collectively our climate ambition and action to date have fallen short on the promises made in Paris” six years ago but the latest draft agreements offered tangible steps and milestones to get there.

Sharma urged countries to take a short break to formalize the proposals before reconvening later Saturday to pass them.

GLASGOW, Scotland -- The chair of a group of African negotiators at the U.N. climate talks in Glasgow says he thinks their concerns haven’t been heard by the developed world.

U.S. climate envoy John Kerry huddled with representatives from Africa and other parts of the developing world on Saturday afternoon to discuss proposals for a potential loss-and-damage fund for poor nations hit by irreversible impacts of climate change and credits in a carbon-trading market.

Lee White, the Gabonese forest and climate change minister who chairs the group of African negotiators, told Egyptian representatives afterwards that the last-minute side conference was "the first real discussion I’ve had...in a huddle with John Kerry with lots of people standing around.”

“You’ve seen the process because you’re in it,” White said in remarks overheard by The Associated Press.

He said that developing nations would likely meet themselves to discuss the draft and "whether we can live with the text or not.” White says he thinks the process of reaching a final agreement will need to go beyond negotiators and involve ministers.

GLASGOW, Scotland — Last-minute smaller negotiations have delayed the larger group of nations from taking up a potential agreement at the U.N. climate talks in Glasgow, Scotland.

Conference president Alok Sharma vowed that the negotiations will end Saturday afternoon, a day later than scheduled, and result in “a balanced package.”

“A number of parties are still wanting to have a discussion and resolve issues,” Sharma said more than 100 minutes after a scheduled “stock-take” discussion of the most recent drafts was supposed to start, but hadn’t. “I hope we can have some resolutions before formally starting this plenary.”

Sharma called the latest proposals that negotiators spent the day poring over "collectively, a package that really moves things forward for everyone.”

Australian Environment Minister, Leonere Gewessler, said earlier Saturday: “We will fight hard for a good and ambitious result. We still have intense hours ahead of us.”

GLASGOW, Scotland --- Several charities are offering to provide funds to kick-start a separate and independent mechanism for rich countries to support vulnerable nations from climate change.

The groups say in a statement that they will contribute an initial $3 million to start with for the “Glasgow Loss and Damage Facility”’ -- effectively a vehicle to give money to poor nations for irreversible damages from climate shocks.

This proposed separate fund is one of the crucial stumbling in negotiations, with rich nations opposing it.

The non-profit Children’s Investment Fund Foundation, the European Climate Foundation, the William and Flora Hewlett Foundation and others are inviting all nations and financial institutions to lend support to the fund.

Follow all AP stories on climate change at https://apnews.com/hub/climate.