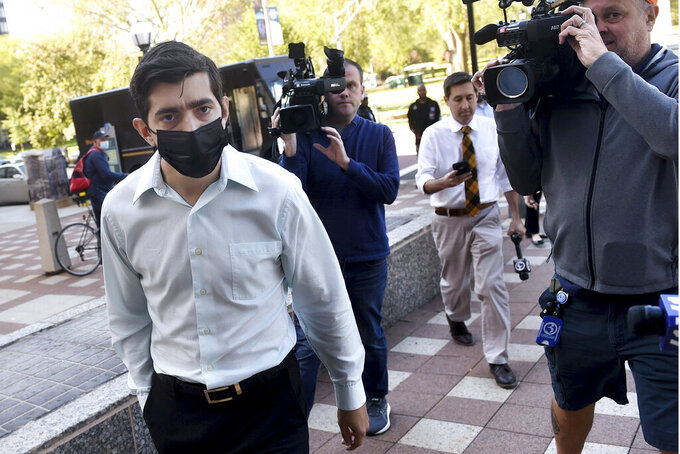 “Dear Secretary Merrill: It is with deep regret that I hereby resign from the Office of State Representative of the 116th General Assembly District effective immediately. Regards, Michael A. DiMassa.”

DiMassa did not return a phone message seeking comment Monday. DiMassa’s lawyer, John Gulash Jr., declined to comment Monday on the charges and his client’s resignation from the legislature.

DiMassa, who also resigned last week as an aide to the West Haven City Council, was arrested by FBI agents on Oct. 20 and charged with wire fraud. Federal authorities said he created a company that received more than $600,000 in federal COVID-19 relief funds for services that were never provided. He was later released on a $250,000 bond.

The arrest came a week after the city's mayor raised concerns about possible fraudulent spending of the city's share of federal pandemic funds, and prompted calls from legislative Republicans for greater state oversight of the huge sums of federal money being provided to municipalities.

DiMassa, 30, formed Compass Investment Group LLC in January with another person, who was not named in the warrant for DiMassa's arrest.

Records show the entity was paid $636,783 by the city of West Haven, from February through September, for hundreds of hours of various COVID-19-related services, including lobbying, consulting and site work for clinics, despite never providing any services to the city’s public health department, according to the affidavit.

The dates of some of the cash withdrawals coincided with cash “buy-ins” of chips at Mohegan Sun Casino by DiMassa, according to the affidavit.

“Rep. DiMassa’s resignation is the right move for his constituents and the State. He broke faith with the people of West Haven and can no longer serve as their trusted voice at the State Capitol,” they said.

Gov. Ned Lamont, also a Democrat, said DiMassa “had no choice but to resign.”

“The allegations against Mike DiMassa are serious and very troubling," Lamont said in a statement. "If the allegations are true, he has not only broken the law but also betrayed the public trust. He had no choice but to resign. The citizens of West Haven and all of Connecticut deserve honest government.”

Lamont, under state law, has 10 days from the resignation to call for a special election to fill DiMassa's seat, and the election must be held 46 days afterward.

This story has been corrected to show DiMassa was arrested on Oct. 20, not Oct. 18.