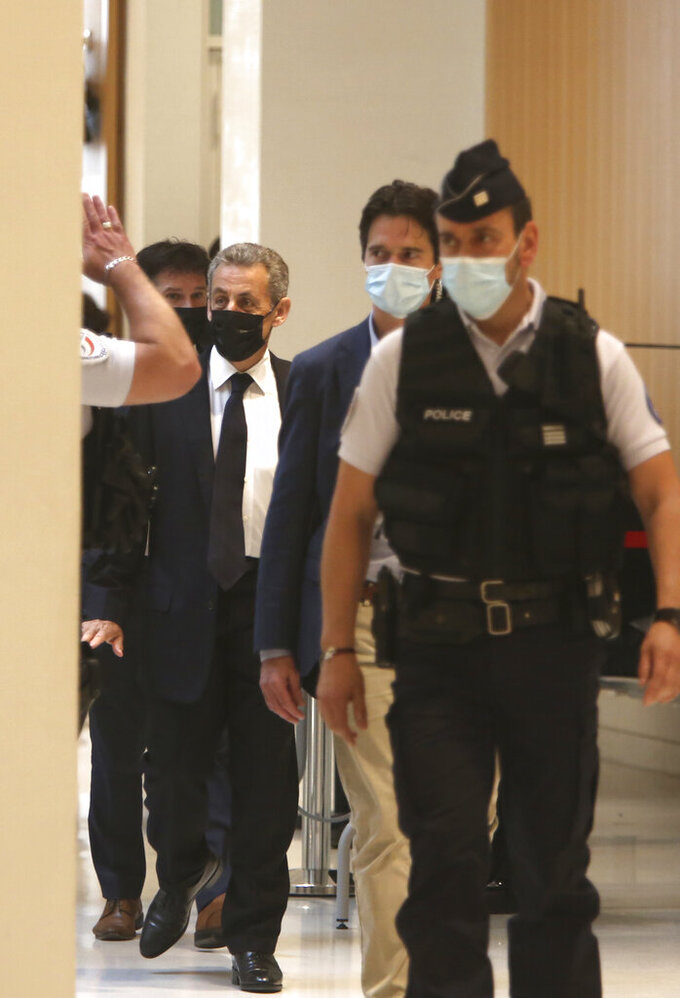 Sarkozy, 66, is facing allegations that he spent almost twice the maximum legal amount of 22.5 million euros ($27.5 million) on the presidential race he lost to Socialist Francois Hollande.

Sarkozy made his first appearance Tuesday at the trial which started last month. The Paris court is seeking to determine whether he was aware of the system of false invoices that was meant to cover up the overspending.

Sarkozy vehemently denied that: "Did I intend to cook the books, do false invoices, was I not careful enough, was I negligent? The answer is no.”

“You have in front of you someone whose life has been dedicated to politics for 40 years,” he told the court, describing how he took part in over 40 rallies, in addition to newspaper interviews and television shows between mid-February and May 2012.

Voice raised in anger, Sarkozy said he had the political leadership of the campaign, but was not involved in organization and logistical details, stressing that as the incumbent president he had other priorities.

He said he “never” gave any direct instruction to service providers in charge of the organization of his rallies, because he had a team to do that.

Sarkozy also strongly denied that his 2012 re-election bid had been organized on a much broader scale than his successful 2007 campaign — whose financing has not been put into question.

The comments came in response to an investigative magistrate's conclusions that Sarkozy and his team decided to hold “spectacular and expensive rallies” in 2012. The campaign’s total cost allegedly reached at least 42.8 million euros ($52 million).

The investigation did not establish whether Sarkozy allegedly took an active part in the process or ordered fraudulent actions himself.

Gesturing with his hands or his head, Sarkozy sometimes appeared to relive his campaign rallies — even making a few jokes about his former political rivals, which prompted discreet laughs in the courthouse.

Sarkozy expressed his belief that the illegal money did not finance his rallies, suggesting that other people may have misused it instead.

"The money did not go to my campaign! Because if it had been spent on my campaign, people would have seen it! They would have said: ‘Nicolas Sarkozy has gone mad! He’s giving caviar to the public at his rallies!’”

“That is my truth,” he continued in a calmer, more solemn tone. “We made mistakes, probably... But was there malicious intent, fraudulent intent? No, no.”

In addition to the former president, 12 other people and the company in charge of organizing the campaign rallies face charges that include forgery, breach of trust, fraud and complicity in illegal campaign financing.

The proceedings got underway less than three months after Sarkozy was convicted of corruption and influence-peddling in another case. He has appealed that verdict.

Sarkozy retired from active politics in 2017 but still has a lot of influence behind the scenes, especially within The Republicans party ahead of next year’s presidential election. French media have reported that he maintains regular contact with centrist President Emmanuel Macron, whom Sarkozy is said to be advising.

The trial is scheduled to last until June 22, with a verdict expected to be delivered at a later date.